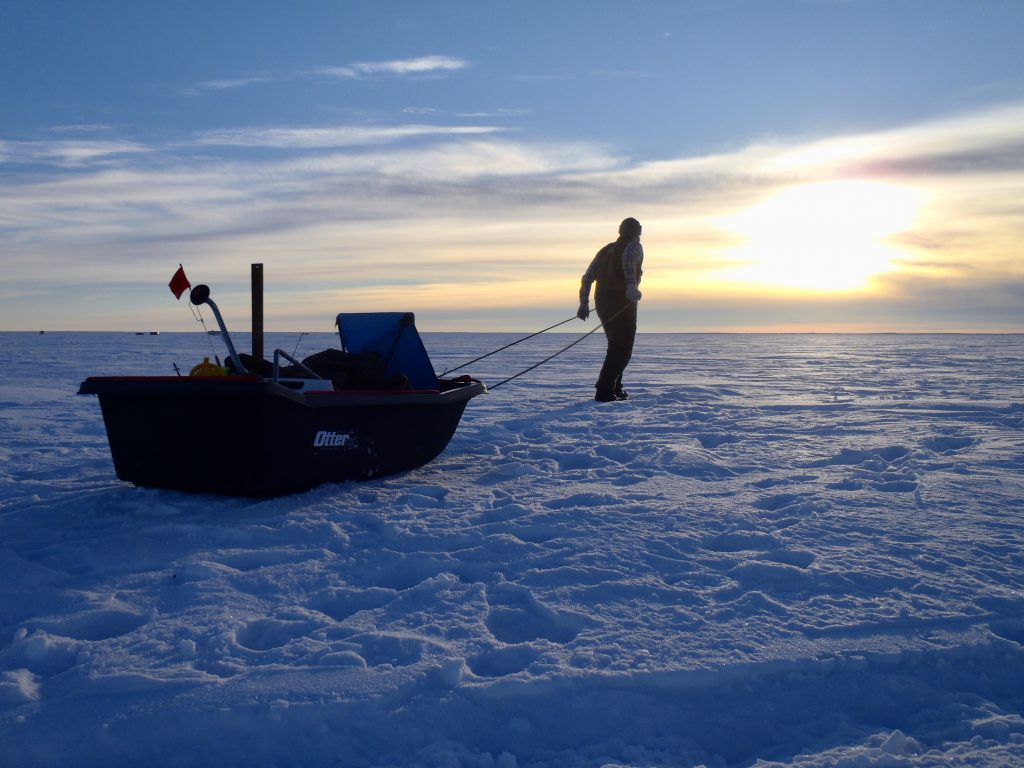 As I coasted down the hill into Garrison, the eastern sky glowed with the clean blue light of impending sunrise. A few minutes later, a lone cloud streak in the East lit up like a hot poker.  I always enjoy a good sunrise and this one made me feel I was in the right place at the right time.  After waiting out what seemed like weeks of below-zero punishment, I was looking forward to spending the entire day on Lake Mille Lacs, in the sun and near-thawing temps.  The plan was to hit the mud flat area on the north end of the lake, drilling holes and covering as much area as possible in search of perch and tullibees, then trying for a “slot” walleye at sunset.

I hate to admit it, but except for a couple nights in a rented fish house with my Dad and brother when I was about ten years old, I had not fished on Mille Lacs before that day.  Jumbo perch and the lake’s famed walleyes have always intrigued me, but not enough to make me forsake all my other ice fishing haunts.  With the current walleye limit at only 1, I’ve been uninterested.  Besides that, I’ve heard that the bottom fell out of the jumbo perch population, and have been replaced by a large crop of tiny perch.  However, when I recently learned that there is also a robust tullibee fishery, I suddenly needed to get there.

The strategy that day was to probe around the edges of the flats looking for keeper perch hanging around the bottom of the break, as well as schools of tullibees contacting the bottom of the flats while roaming around the deep mud.  I also hoped to find a willing walleye in the process, but I’ll cut that part of the story short- that didn’t happen.  In fact, in most holes, there was plenty of activity but no bites.  Due to the size of their signals on my Vexilar, as well as the behavior of those little blips, I suspected they were the hordes of little perch I had heard about.  Of course this could have been confirmed by an underwater camera, but I don’t have one.  In a way, it doesn’t matter, because if they don’t want to bite, it’s always more important to go and find the fish that do. 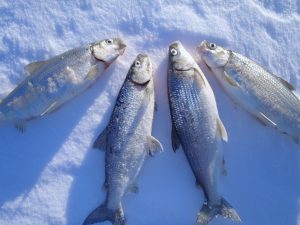 After a few hours, I headed for a depression between mud flats that my map indicated should be about 35 feet deep.  After a vigorous hike, I promptly sat down at the first drilled hole to cool off and see if anything was moving around down there.  After not more than five minutes, a fish came in and gave my jig a look.  It was moving fast and was well off the bottom.  Without feeling any bite, I pulled the rod tip up to create a little movement and found the fish was already on.  A short but lively struggle followed.  It turned out to be a handsome tullibee- about 14.5 inches- that almost managed to release itself at the top of the hole. A quick reach and one soaked glove later, and it was flopping in the snow. It would be an understatement to say I was extatic—this was exactly what I had come for.

Over the next couple hours, I managed to put four more on the ice. Unlike fishing for almost anything else, there was no need to sort through the smaller fish to find the keepers; every one that came up was around 14 inches- a nice size to send to the smoker or oven. They were extremely active that day (as I think they usually are), and they responded best to lures when they were moving vigorously. I cannot overstate the importance of movement in attracting and triggering the fish- each fish that bit came to my lure when it was hopping and darting. However, as active as they were, they did not slam my baits. Not once did I feel them bite my lure, which seems a behavior more characteristic of sluggish crappies than of fish that were darting around and responding to aggressive lure presentations. 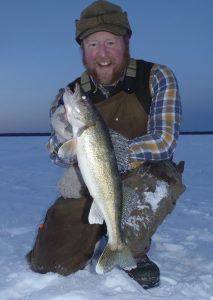 When the sun started getting low and the fish seemed to cool off, it was time to get back to some of my previous holes and set up for the sunset walleye bite. A previous spot nearer the truck that held a lot of little fish earlier in the day seemed to promise a good chance at something toothy looking for a meal. After getting everything ready, I left my gear at one hole while I went back to my sled to put some layers back on and grab a bite. After jamming a couple pieces of jerky in my mouth I went back to the hole.  Before I could finish chewing that jerky, a fish came in hot and fast.  Wanting to put on a good show, I jiggled my spoon a little, but it seemed to start swimming away.  With some more aggressive hops and jerks, it came zooming back and slammed it.  At the hookset, it was obvious this fish could be a contender for the slot, and not just a dinky little perch caught out after curfew. At a little over 18 inches, it came up short of being a keeper, but was still a walleye I’d be happy to catch on any other lake; I was thrilled.

The sunset was at least as good as the sunrise.  You know, the kind with a beautiful orange that silhouettes the trees, that fades through baby blue and into the deeper blue over your head.  There was still a whisper of a breeze from the West that I had to face away from in order to stay warm.  So while my eyes were glued to the flasher screen, I didn’t notice when all the light had drained from the sky.  When I finally looked up, I was treated to an inky sky with a planetarium-quality view of the stars. This was an unanticipated treasure that kept me on my bucket just a little longer as I waited in vain for another walleye. Lack of another strike didn’t bother me, though; it was a great end to a satisfying day.

For the most part, Tullibees are a creature of the deep.  In summer, they can often be roaming anywhere in the water column with larger fish like pike, muskies, walleyes, and lake trout following them around, hoping to pick a few off.  In the winter, look for them at or near the bottom while they feed on the tiny invertebrates that live in the mud.  Find a soft mud bottom- often 30, 40, 50 feet deep, depending on the lake- and offer them small lures.  If the lure is a minnow lookalike, make sure it’s a small one.  Otherwise, think like a bug: “match the hatch,” as they say. And make it flashy and lively.

Now, the matter of getting tullibees out of the ice hole should be discussed.  In any tullibee fishing video on the internet, it seems like everybody struggles with grabbing them, and for good reason.  Their bodies are firm and slimy, with small gills and pointy little heads that offer no grip whatsoever.  Every time I pulled one up and tried to grab it somewhere, it would slip from my grasp like a wet bar of soap.  And you certainly can’t get your fingers in the gills while they’re turning in circles.  I wasn’t prepared for this, and that’s why I struggled to pull the first one up and it became unhooked.  I also didn’t want to pull them out by the line because that seemed risky with 3-pound test.  By the last one of the day, I had the foresight to get my ice skimmer in the hole behind the fish to push it up.  This is the best I came up with.  You have been warned.

Tullibees are for Anyone

I think of myself as a low-tech, minimal-equipment guy.  I have never owned a power auger and I will probably never have an ATV, underwater camera, or “wheelhouse”. I like the exercise and I believe that always being light and portable enables (maybe forces) me to cover ground and make the most of my time on the ice. Besides, some of the places I have loved fishing the most are remote and/or could never be accessed except with light and minimalistic gear. In the case of Mille Lacs, anyone with basic ice fishing gear can catch fish.

Aside from basic ice fishing gear, there is little required to do this or a similar outing. You’ll need bait anywhere you fish, and driving to your fishing destination is required unless you live there. So that just leaves the lake map and the resort access fee. And from what I learned, paying to drive on the roads they’ve scouted and plowed- along with bridging the cracks and pressure ridges- is worth $10 in the interest of keeping your vehicle on the right side of the ice.  $21.56 is a worth the price of admission for an all-day experience at a quality, new-to-me fishery like Mille Lacs.

Cost of This Excursion:

$8.30 for rainbow chubs and waxworms 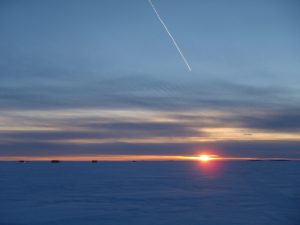