Skip to content
Foraging - Get Outside - Mushrooms - What to Forage

It can be hard to believe, but we are not much more than a month from the beginning of foraging season here in Minnesota. Probably everyone has at least heard of the morel mushroom, but few know of the other treasures to be found in the spring. It is too early for fruits of any kind, so the early season is all about greens and the first mushrooms. I will outline some of Spring’s earliest offerings with respect to the morel season, which may be helpful to some who are familiar with morels but who may not have paid attention to what else is available. (There is a wealth of information out there on morels, so I won’t devote much to this topic at this time. For more information on locating morels, see my previous post “Scouting for Morel Mushrooms”) The timing of everything is hard to predict, from year to year and across the state, so that is always a factor to keep in mind. 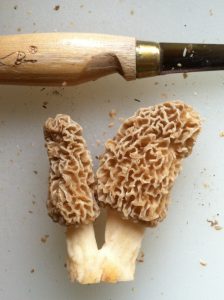 In my opinion, the attention the morel gets is way out of proportion with its actual rank in the mushroom/foraging hierarchy. Sure, it’s good, but it’s not that good. It has been observed that since it is the first good mushroom of the season and its arrival puts an end to six months or more of anticipation and cabin fever, we put it on a high pedestal.  I tend to agree with that assessment.

Here in the upper Midwest, the first morels to emerge in the spring are the “black” morels, darker in color and smaller in size. They tend to show up while the woods are still bare. Then there are the “grays,” followed by the “yellows.” The yellow morels come out last and are the lightest in color. I myself have picked far more grays and yellows, and don’t really bother going out until the soil temperature has reached 50 degrees. The last several years, the main crop of yellows in the Twin Cities area has come during the middle to end of May, after a great deal of greening has occurred on the trees and shrubs. Every year is different and the season can be short, so one has to pay attention in order to not miss out!

The Pheasant Back mushroom, otherwise known as the Dryad’s saddle, will be found throughout the morel’s fruiting period. In fact, it will fruit throughout the growing season, but it is most easily found in the spring. It is a polypore mushroom, more specifically of the shelf mushroom type, and will be found growing on dead and decaying elm trees. “Pheasant back” is a descriptive term, and it doesn’t take much imagination to see it describes this mushroom’s color and pattern. You can be certain of the identification by smelling a cut piece: I think it smells like cucumber. My brother and others think the smell is more like watermelon rind, but both descriptions are apt. Pick them while they are still darker in color (which indicates freshness and higher moisture) and while the pores are still very small (if not invisible), for a more tender and much better-tasting specimen. Eat within hours for best taste; simply slice and sauté lightly in butter. 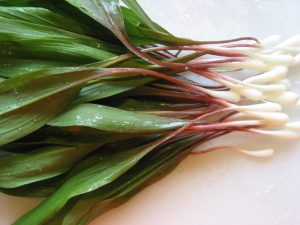 Ramps, otherwise known as wild leeks, are among the first plants to emerge from the ground in spring. A member of the onion family, identification is easily confirmed by pinching off a small piece of leaf and crushing it between the fingers. If it is a ramp, it will smell undeniably “oniony.” They are easily spotted when they are almost the only flash of green in the woods, but can be found for weeks afterward.

Ramps are a popular traditional food in the eastern U.S., and populations have suffered from overharvest. In Minnesota, it is best to find them on private lands, since most public lands (state forests, county lands, regional parks, etc.) do not allow the taking or cutting of plants. To harvest sustainably, it is prudent to only dig one out of ten plants in an area. Additionally, you may wish only to take some of the the greens and leave the bulbs in the ground. I visit a small plot of my family’s land and take only a few leaves in any one year. Just to be able to taste them and share with my family is enough.

There is a plethora of recipes available online, but my favorite way to eat ramps is to add them to my scrambled eggs.  I chop them coarsely, sauté them in butter until they begin to wilt, then pour in the beaten eggs and finish frying it all. Enjoy, but treat them like a delicacy to ensure they will still be around for generations.

I had long known that the common dandelion was edible, but didn’t bother trying them until just a couple years ago. Even then, I was not too impressed. I had taken some impressively long leaves, thinking they would be a good addition to an ordinary salad. The truth, however, was that they were way too big and tasted of nothing but bitterness. I have since tried them again, but chose much smaller specimens with much better results. In fact, that characteristic bitter flavor was barely detectable, sometimes absent. I recommend taking the leaves when they are 4 inches long or shorter, and early in the season. It is also wise to choose a location to harvest dandelions where you know there are no chemicals used. Dandelions will be one of the first plants to green up in the spring, and often start blooming in our yards before the grass even starts growing in earnest. 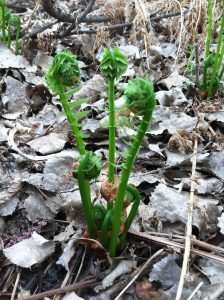 Ostrich ferns, otherwise known as fiddlehead ferns or just “fiddleheads,” are an unusual but rewarding choice. They are often described as tasting like a “cross between asparagus and spinach.” I don’t know that they taste much like either of those things, but they are good in their own right. They can be found in low areas, usually on the edges of marshes and other waterways. Cut the heads before they unfurl; the closer they are to the ground, the better.

When cutting fiddleheads, one must first make a positive identification. The only true “fiddlehead” is the Ostrich fern. All the others are imposters; some may be eaten, but may contain significant amounts of carcinogens. The first thing to know is that the “head” of an ostrich fern is quite substantial compared to other ferns, even- or especially- as it emerges from the ground. It will also have brown papery material flaking from it. The second thing is that the stem of the Ostrich fern has a deep U-shaped groove on the inside of the stem. This is the main distinguishing feature.

The third thing that will help identify the Ostrich fern is the spore-bearing structure. It has its own separate stem, is large, and resembles the shape of the leaves. This should help distinguish it from the common Interrupted fern and the less-common Cinnamon fern.

Those who pursue fiddleheads will assert that the season is short. In a way, that is true, but it is also untrue. Any one fern, when it starts to sprout, will unfurl its stems very quickly. However, I have found that different stands of ostrich ferns will emerge from the ground at different times. For some reason, at least near where I live, the stands of ferns that live in the shade of trees will sprout first, and the stands that are in sunny locations will sprout sometime later. In this way, the season can actually last for at least a couple weeks. They seem to coincide nicely with the yellow morel harvest in my area, usually in the heart of May.

When it comes to eating them, once again, one will find many recipes through a quick internet search. I like to parboil them for about two minutes, drain them well, then sauté in olive oil with some minced garlic. Sometimes I eat them this way unaccompanied, but I also like to add this, along with sautéed morels and other vegetables, to some pasta for a kind of pasta primavera.  No matter what, they’re worth trying. 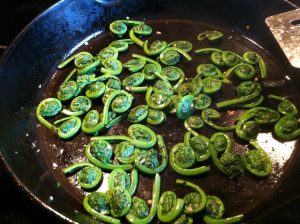 It is not easy finding a place to do your foraging, and it is not always allowed on public lands. Visit my blog post Foraging in Minnesota: Know Your Public Lands to learn where you can and cannot forage.

And if you’re interested in learning about more foraged foods, please visit the What to Forage page.

2 thoughts on “Foraging in Minnesota: The Early Season, Part 1”