Skip to content
Do Something New - Fishing - Trip Report

There is a pathetic time of year that comes after the ice melts and before spring really gets going. Fishing is slow, and turkey hunting hasn’t yet started. It seems every year during this time I find myself itching to get outside and just do something, if only because the weather can be so seductive. This year, I came across a couple mentions of spring sucker fishing that really piqued my interest, especially when I read that suckers are supposed to be tasty when smoked.

I thought about when and where I might be able to try this, but didn’t come up with much; I spent a couple hours probing a creek by my house with no results. Then it dawned on me that I’d have the opportunity to try some cold northern rivers on my way to see the sharp-tailed grouse dance (another story, another time). Perfect. Once I’d identified my chance, I couldn’t not try my hand at sucker fishing.

So I set out one afternoon toward St. Louis County, intending to stop at a parcel of state forest land on the Kettle River not far off the interstate. The day was bright and clear, but cold and quite breezy. My fingertips were barely on the safe side of freezing on that late April day as they tended my rod and line through my wool fingerless gloves.

My strategy for catching fish was simple and timeless: nightcrawler on a wide gap hook, taken to the river bottom with the help of an egg sinker. Before long, I hooked into a sucker bigger than I think I’ve ever seen. I don’t care to keep fish that seem large for their type, with the exception of panfish. I tossed it back. I was pretty sure I’d catch more before long anyway. That proved to be erroneous thinking.

After an hour and a half or so, I had to move on. I needed to race the sun to make it to another parcel of state land where I hoped to camp for the night. Besides, that destination was on another river, so more fishing was in store.

I managed to pull two suckers out of the Whiteface River that night while the light drained from the woods. They were smaller than the first one, so they didn’t make it back into the river. After scraping up a bucketful of grainy snow from the only snow pile left in the vicinity, I wedged the fish inside to keep for the next day. 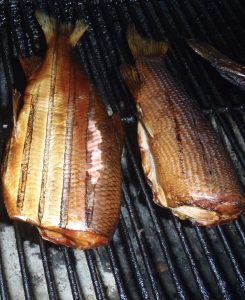 When I set out to smoke them, I scaled, gutted, and stuck them in the brine for almost 24 hours (see Smoked Tullibees for the simple brine recipe). It seemed like time to clean out the freezer, so they were accompanied into the smoker by two large tullibees and a rainbow trout. I couldn’t help but notice how differently the suckers were shaped compared to the other fish- tullibees are deep and narrow (at left in photo), while the suckers are definitely more round like a torpedo (at right in photo). Anyway, everything was smoked with apple wood, at around 180 degrees, for over 5 hours.

When they had cooled, I put almost all the fish in freezer bags and put them in the freezer for another day. I kept one of the suckers out because I couldn’t wait to see how it tasted. The flavor was good…real good. I started by flaking the meat off the ribs, pushing gently downward with a fork, below the lateral line. This worked wonderfully, just as it did with tullibees months before. Above the lateral line, however, there were many tiny, forked bones that did not stay attached to the skeleton. These bones, in addition to being too small to be seen easily, largely kept themselves embedded between the layers of flesh and did not make themselves known until being chewed upon. Too small to extract, too big to ignore. Now I think I know why sucker is not standard table fare. I suppose pickling would take care of this problem, but there really is no comparison between smoking and pickling; my love for smoked fish beats my love for pickled fish by a magnitude of ten.

Nonetheless, I was glad to have tried suckers. I’ve since looked into ways to get rid of the bones so I could feel better about catching and smoking more. Nothing has surfaced on that front, but I did read that scoring the fillets with your knife will cause the bones to dissolve when fried in hot oil. I’m not sure if that will pan out, but giving that a trial is probably all the excuse I’ll need next year to get out during the early spring slump.