For my fortieth birthday, I told my wife I’d like to take the river fishing float trip I’d been thinking about for over 5 years. As spring approached, I started to think critically about this plan, and realized that bad weather could turn a good river trip really bad in a hurry. On a river, we’d have a starting point, a destination, and a finite time to reach that destination. Rain- especially of the relentless kind- would not only make that time miserable, but potentially dangerous. Shifting the trip to the Boundary Waters would not only give us flexibility in terms of dealing with the weather, but also a chance to get into the lake trout that had successfully eluded me over the winter.

After much consultation with maps and web resources like BWCA.com and MN DNR’s Recreation Compass, I identified several lakes in the area of East Bearskin that looked like great fishing destinations. Fishing- especially eating fresh fish- is what I love to do the most in the north woods. 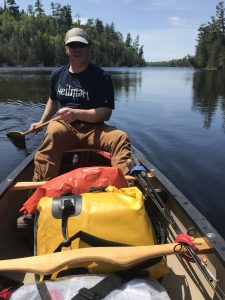 The weather was great as we made our way east across East Bearskin the first day. We made decent time getting across this sprawling shield lake, noting some campsites, the Crocodile River, and the portage to Crocodile Lake along the way. Back at the landing, I noticed the Forest Service’s map didn’t show both portages to Alder Lake that my McKenzie map did. I didn’t give this much serious thought. As a result, I steered our canoe to the portage at the end of the northern fork of E Bearskin, which is apparently unmaintained (59 rods). I wish I’d known that beforehand. The trail was a bit steeper than I would have liked, but elevation was a minor nuisance compared to the four or five large trees that were laying over the trail. Needless to say, we took the other portage on our way out. That other portage (~50 rods) was great- clear and wide and not very hilly.

This next lake was the last place we saw people for the next three days. They were in a very nice-looking campsite on the middle of the lake near the two islands. From the water it looked suitable for a couple tents, and probably some of the bigger models. From what I gathered, Alder doesn’t seem to have any notable fish populations, so it was another pass-through lake for us. The portage to Canoe Lake is a nice short one (~25 rods).

There’s not much to say about Canoe Lake; we were on it and back off in 10 minutes. The only reason I might remember it is for the 3 male Common Mergansers in their striking white plumage that were cruising the south shore as we passed by. As small as it is, there are actually 3 campsites on this lake. When we came back through, 2 of them were occupied. In the case of unfriendly weather, a spot in one of these campsites might be a better place to wait it out than on one of the more exposed sites on Alder.

Crystal Lake was where we spent all our time. There is a healthy, long-standing lake trout population there that we wanted to access. We passed up the first campsite (north shore, toward the west end) because it is perched on the hillside and did not appear to have that good a tent pad. When we got to the other site (north shore, toward the east end) we found it to be just as hilly. However, there were 3 possible tent spots-probably none of them suitable for anything larger than a 2-person tent- of varying desirability. We chose the one directly uphill from the fire pit area. There was a noticeable sideways slant that sometimes made it hard to get comfortable at night. I think it’s safe to say if you plan to stay on Crystal Lake at either campsite, don’t plan to bring anything bigger than a 2-person tent to either site, and don’t plan on finding the best-ever place to set it down.

Fishing Crystal Lake was a little hard to figure out, but we did catch some good fish. I was hoping that since Spring sprung late this year, the water would still be cold enough to allow the lake trout to be up shallow. We didn’t determine that they necessarily were or weren’t, but the two we caught (both around 19-20 inches) came from drifting with jigging lures over the deep parts of the lake. Specifically, my wife caught hers on a larger Swedish Pimple in hammered silver color, and I caught mine on a gold blade bait, similar to a Heddon Sonar. We let out lots of line and tried to keep them as deep as we could while we jigged. We had spent plenty of time drifting off both shores and casting various lures, but never caught anything using that method. I expected to catch at least a smallmouth that way, but they never materialized. 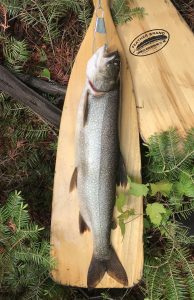 There is a pretty healthy stream coming in from the north- not marked on my McKenzie map- that I believe is worth a look. It is approximately in the middle of the lake. This stream is hard to spot as it flows down from the woods and through the rocks, but we found it when the wind stilled (the stream made a fair amount of noise). There were numerous fish swimming around at the break (probably 20 yards from shore); the water was so clear that with no waves, I could easily see that some of those fish were white suckers, while others looked like lake trout. They were all in an uncooperative mood while we were there, so I can’t confirm the identity of any of them. In any case, I think that spot would probably hold some fish throughout the season, and probably more so after a good rain.

At our campsite, I managed to catch a nice walleye from shore, with heavy clouds and strong incoming waves. I wouldn’t count on a similar success in the future, because it was the only fish I caught as I probed up and down the shore with my casts. But it’s always worth a try, especially if the wind is too strong to fish from a canoe safely. Not too far down the shore to the east is a rocky point that might offer additional shore fishing opportunities if you’re willing to do a little bushwhacking to get there.

Nearby Bench Lake is stocked with brook trout, and was an opportunity I thought we might try to take advantage of. Between weather delays and a strong desire to catch lake trout, we didn’t manage to get there. From all accounts online and at the forest service station, the portage trail (87 rods) between Spaulding (a short portage from Crystal) and Bench is classified as “unmaintained.” Given the difficulty we experienced with the other unmaintained portage, I’m sort of glad we didn’t get around to it.

Pierz Lake, one portage off Alder Lake, is stocked with splake. We also considered stopping there on our way out, but the miserable weather made us decide it would be better left for “next time.” Like Canoe Lake, Pierz has 3 campsites available.

Crocodile Lake is located to the south of East Bearskin, just one portage away (~100 rods). It can also be accessed by a different entry point (#66-“Crocodile River”), which includes a couple smaller lakes and a little stretch of the Crocodile River. Crocodile Lake boasts what appears to be one of the better walleye fisheries in this area. This was another possible side trip on our exit day, but it didn’t happen. I did flag Crocodile Lake in my mind, however, because I think it could be a great destination for taking our kids on their first BWCA adventure. 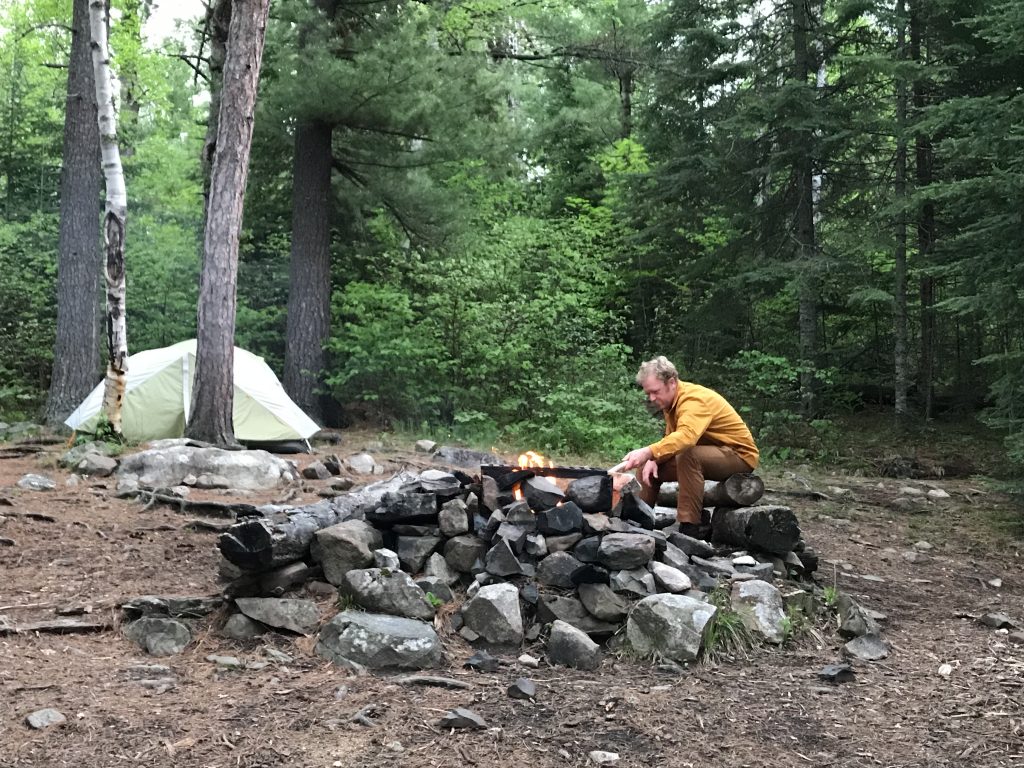