Skip to content
Foraging - Mushrooms - Public Lands - What to Forage

The young jack pines were thick and visibility was limited where my dog and I searched for the elusive spruce grouse. Lush moss covered the ground and made for easy walking. All at once, my eyes were drawn to a handful of bright yellow spots off to my left; they glowed, almost as if lit from within. I knew instantly they might very well be the other prize I was looking for: chanterelle mushrooms.

Those mushrooms were indeed chanterelles, and the first ones I’d ever found. My timing could not have been better- they were in prime condition. Some smelled strongly of their fabled apricot scent and they were all stunning to look at. I took my hat off and started picking the best-looking ones for soup. They were big firm specimens in prime condition, and they weren’t alone. I soon found several more groups of them, to the point that my hat was soon full and I had to leave more in the woods than I was able to take. 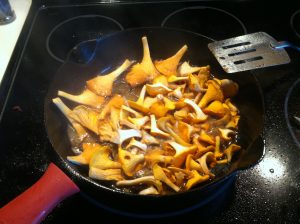 Chanterelle mushrooms are among the more popular mushrooms sought in Minnesota, and for good reason. They are a tasty, meaty mushroom that is easily spotted under most conditions. They can be found from the Iowa border up to Canada, and if you are in the right habitat at approximately the right time, they can be found in good numbers. What’s more, their season stretches from midsummer through fall. Whether or not they are in prime condition when you find them is, of course, a matter of chance.

There are several cantharellus species present in the United States. The most common in Minnesota is probably Cantharellus cibarius, usually just called “chanterelle” or “golden chanterelle,” and my main focus here. It is said to have a few look-alikes, but it’s my opinion that they are easily distinguishable if a person is good at identifying a few key characteristics- no spore prints necessary, really. Notice that I use the word “usually” a lot. That is because mushrooms are almost never completely predictable; color, shape, location, and other factors can vary. But knowing as many characteristics as possible helps us make positive identifications. You must go way beyond finding “yellow” mushrooms if you think you’re going to live to see the next foraging season. 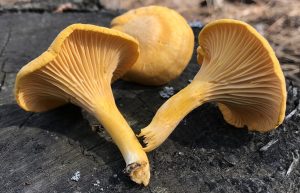 Probably the most important identifying feature on a chanterelle is its gills—or lack thereof. Most sources will call them “false gills” or “ridges” because they are structures unlike true gills. In Michael Kuo’s book “100 Edible Mushrooms,” he calls them “mere folds in the mushroom’s surface, not structurally distinct units.” Folds, indeed. If you look close enough, they look like they are pinched from the stem and cap’s underside, as your skin would if you pinched the back of your hand. These folds/ridges are usually forked, and should appear to run partway down the stem. If you pick a mushroom you think might be a chanterelle and the gills are the same type as those on the white button mushrooms at the grocery store, walk away.

Chanterelles are often described as being “egg-yolk yellow.” Considering how orange a raw egg yolk can look, I have never quite bought into this description. I do, however, think it is pretty close in color to raw scrambled eggs– creamy yellow with perhaps a hint of orange. But there can be a wide range of color variations. In my experience, a Cantharellus cibarius that is very light in color is usually old and/or getting dried out.

Chanterelles are also often described as having a “vase shape.” This is true, sort of. Smaller specimens (say, 3 inches or less) will usually have much more of a classic mushroom shape, with a margin that curls under beautifully. As they get bigger/older, their caps will often flatten out somewhat, giving the margin an irregular, curled, or wavy appearance ~or~ the cap seems to pull up, exposing the underside a bit, to attain the “vase” shape. If it doesn’t have a profile like a vase, it doesn’t necessarily mean it’s not a chanterelle.

As previously mentioned, the stem will have the ridges running down onto it (the proper term is decurrent), to varying degrees. The stem structure is distinct from the cap, but it also should appear to taper down off the cap somewhat. If the stem runs straight up into the cap and disappears into the gills, walk away.

Chanterelles are a mycorrhizal mushroom, which means they live in a symbiotic arrangement with plants (trees). Those trees are almost always cited as being oaks, but in northern Minnesota they can be pines. I myself have found them in association with red and jack pines, but I have also found them close by in young aspen stands. They really could be anywhere, it seems. They will be scattered on the ground, usually singly. It is said that mushrooms like to spring up through moss. In my experience, there is also something about grass- if I am in good chanterelle habitat and spy an area with grass growing, I’ll go out of my way to check it out. Sporadic areas of grass seem to boost the odds a little.

Since they are mycorrhizal, that also means they are a terrestrial mushroom– growing from the ground. If they appear to be growing from a log or the base of a tree ~or~ if they are growing close together in a clump, as though all from the same spot on the ground, walk away.

If you are lucky enough to harvest chanterelles in prime condition, you will probably be able to detect an apricot scent (some just say “fruity”). Many mushrooms of the chanterelle family will give off a fruit-like odor. It is easiest to smell if the mushrooms are put together into a paper bag for a short time. It doesn’t always occur; it seems to me they don’t smell under dry conditions or if too old. In this way, you can’t be sure it’s not a chanterelle. However, if you do detect the apricot odor, this is another positive indicator that you have collected chanterelles.

As with most edible mushrooms, there are poisonous and/or non-edible look-alike mushrooms that foragers should be aware of. Here are some commonly cited Cantharellus cibarius look-alikes with which you should be familiar:

The look-alikes could make an entire blog entry, so I won’t describe them here. I will just remind you to make sure you have mushroom guidebooks to reference, as each mushroomer should have multiple resources available. Being able to rule out mushrooms is at least as important as ruling them in!

*If you think you might have collected a chanterelle that is not C. cibarius, you might still have something edible, if not delicious. Kuo provides a great key to walk through on this page.

In Minnesota we have a wealth of public land available to roam, to look for chanterelles and other treasures. Here are only a few suggestions:

Richard J Dorer State Forest- This state forest land is in many scattered parcels, found throughout much of the southeast part of the state. With lots of oak stands, this is a great place to look for the earliest chanterelles.

Mille Lacs Wildlife Management Area- At almost 40,000 acres, this is one of the largest WMAs in the state, and is comprised of mostly hardwoods. It is a good bet for midsummer chanterelle searching in the middle of the state. Stop at WMA headquarters for a map. 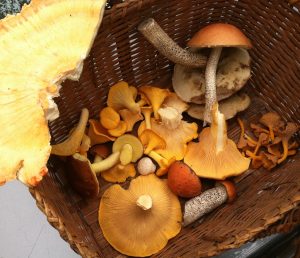 Pillsbury State Forest- I had a great time in Pillsbury with my kids a few summers ago, in mid-August. We came home with a mixed bag of mushrooms, including a nice load of chanterelles. The lakeside campground makes it an easy destination if you’d like to combine your foraging with camping. Tens of thousands of acres are available.

Superior National Forest and Red Lake WMA- These two large areas should provide enough acreage and pine stands to last you all fall, and then some. The last time I was at Red Lake WMA, there was a wealth of mushrooms of many kinds around the red pine stands. Superior N.F. has the advantage of being near the shore of Lake Superior, a top-notch destination for fall colors.