Are you looking for a way to get kids into the outdoors? Do you want to do something simple, accessible, universally appealing, and fun? Take them berry picking.

I took my kids yesterday to some public land in east central Minnesota with the hope of finding some mushrooms and, if lucky, some raspberries or blueberries. Well, blueberries ended up being the main attraction, with some bonus raspberries and mushrooms as well. This is why we call it “foraging,” and not simply “harvesting.” You never know what you’re going to find.

Once we’d gotten there, our search started in a stand of mature hardwoods. We found only one edible mushroom and almost no raspberries. Feeling a bit discouraged, we ate lunch in the shade, admiring the impressive hazelnut harvest to come and wondering if things would get any easier. After driving a couple miles- well short of our next intended destination- we stopped to walk along an ATV trail in a young pine stand, to see if there was anything to pick. It was sunny and getting a bit hot, so the kids were less than enthusiastic. It wasn’t long before we found some raspberries, juneberries, and wintergreen to nibble on. And then we found it: a blueberry patch that exceeded our expectations—wildly.

The blueberry bushes were thriving in a sunny stand of young red and jack pines. I had thought we’d find blueberries on the sunny edges of more mature pine stands (which they also were), but they, along with raspberries, strawberries, American hazelnuts, and native prairie grasses were doing quite well in the loose sandy soil with little to no mosses, lichens, or other organic matter. That’s not what I expected, but I wasn’t about to look that gift horse in the mouth.

We hunkered down and berries began raining into our plastic containers. Without much effort, we soon had a couple pounds of mixed blueberries and raspberries. The sun was harsh and the flies were ravenous, so we took to the woods to see what we could find. Before long, my daughter alerted me to the bright yellow mushrooms I had almost stepped on- chanterelles! I was more than happy to kneel down and cut the better specimens. While we were there, we found a few remnant strawberries and a blooming wood lily. As we wandered through the pines, we found several more patches of chanterelles that were older and devastated by bugs. I managed to find a few more good mushrooms and we all grazed on more berries as we went along. Another spot- chosen almost randomly from the car- yielded many more blueberries, raspberries, and mushrooms. The mosquitoes there were also thick, to the point that I sent my son back to the car to get the spray so we could all apply a new coat. 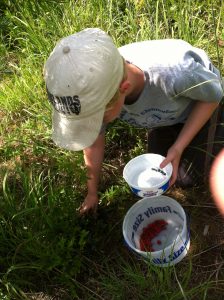 Before the drive home, we ventured into a nearby lake to cool off. The DNR website indicated there was a picnic area and a boat launch, so I didn’t know if it would really be any good for swimming. It turned out to be a sound plan, and we weren’t the only ones to show up there for the cool water and clean sand surrounding the dock. I even managed to keep snacking while in the water, what with the ripe juneberries hanging out from shore.

This outing was barely planned, and yet it turned out to be about the most fun we’ve had outside all summer. The berry picking was out of this world, but that wasn’t all. The kids loved discovering new things, both things I showed them and things they wanted to show me. The weather was as good as anyone could hope for in the middle of July, and wildflowers, wood thrushes, and general peace and quiet rounded out the afternoon nicely. Even if we had managed to pick half as many berries, we still would have had a spectacular day. You never know what to expect when you go outdoors, but this day was yet more evidence that it’s never a goose chase, especially when you bring kids along for the experience. Now, I’ve learned that some things can help ensure kids have a good time on such an outing, and yesterday was no different.

Sometimes, especially in the presence of adversity, kids will lose interest before you’d like them to. My daughter was more than happy to keep filling her bucket in the sun, but my son’s patience withered as the sweat beaded on his forehead. I literally told him, “If you don’t want to pick berries (to take home), then just sit down and eat some. Whatever it takes to keep you engaged!” I knew acknowledging his misery and appealing to his stomach would buy us more time. Besides, berry picking is no fun if you don’t eat any while you’re doing it; I frequently urged them both to eat while they picked. I also sent him back to the car for their water bottles, both for the sake of their thirst and to give him something to do. And while I knew the best berry picking was out in the open, I also knew they would both fare better if we took to the shade when they got hot. I suppose I could have kept picking and sent them off together to explore (which they would have loved), but I still wanted mushrooms. In any case, I know better by now than to try and crack the whip when they start flagging; sometimes it’s better to move on to keep them in high spirits. When I bring them along, I know I need to make compromises in order to maintain their interest. Also, the younger the kids, the less time you generally have before they’re completely checked out; keep the outing short if necessary.

This rule goes hand-in-hand with keeping things low-key; it’s all about keeping the experience positive. If an activity doesn’t have a discernible degree of fun attached, why would they willingly do it again? Berry picking can seem like work, so anything you can do to make it fun will help keep it going. Talk about what you’re going to make with all the berries you’re picking (hint: kids like muffins, pancakes, ice cream toppings, and jam on toast). Maybe make games out of imitating bird calls or who can find 5 different flowers faster. Use your imagination and don’t be afraid to get silly. If possible, pair the activity with a known hit like swimming, picnicking, or junk food (shh, don’t tell Mom). My kids like to eat at restaurants in the far-flung places I take them; it seems to perk them up at the end of the day when they’re exhausted.

Every once in a while, I forget to bring the bug spray. If I had forgotten it yesterday, I would have either needed to buy a can somewhere, or call it quits. I can tolerate a fairly high amount of mosquito-induced misery, especially when the harvesting is as good as it was, but kids would rather be doing just about anything else in the world when they start getting bit by mosquitoes and flies. Likewise, if they didn’t have sunscreen protecting their arms and necks, they would have been sunburned, dehydrated, and inconsolable within a couple hours. That’s no way to inspire future trips.

You can’t go wrong whenever you introduce kids to the great outdoors. Do a little research (state forest managers, for instance, could point you in the right direction), set aside some time, and give it your best shot. Our public lands- especially in Minnesota- are plentiful and easy to access, and offer innumerable opportunities for berry foraging. And if not berries, why not nuts, mushrooms, or fish? Just get out there!