When nature isn’t giving you what you want, maybe you have to re-think what you want from nature. Such was the case for us a few years ago on Labor Day weekend. Raspberries and others were a disappointment that year, and I had wanted to try making some jellies or jams. The chokecherry trees were loaded that early September, and when my brother and his wife had taken one of their kids to town for a probable appendectomy, we distracted their other two by making an adventure out of harvesting all those beautiful purplish-black berries. My plan was to make some jelly to “see what it’s like.” With an ice cream pail full, we had no idea how far that bounty would go.

Turns out, that seems to have been both a good year and a late year for chokecherries. In the summers since, the chokecherries in Itasca County have been ready to pick much earlier (more like mid-August) and the crop hasn’t always been as good. With their juice I’ve made many half pints of jelly and, when the jelly didn’t quite turn out, lots of heavenly pancake syrup. The chokecherry’s inherent flavor is hard to describe, but it is definitely a favorite at my house, and worth trying.

The oft-overlooked Chokecherry is closely related to other wild cherries, and grows throughout Minnesota and most of the northern and western U.S. The trees bloom with drooping clusters of white flowers, which in time produce drooping clusters of small, dark-purple stone fruits. Those fruits are anything but sweet and thus no good for eating straight from the tree; their bitterness must later be overcome in the kitchen with the use of a good deal of sugar. 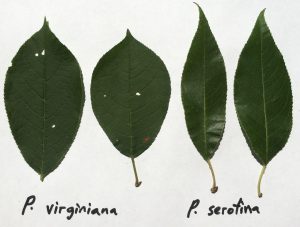 To most, the leaves and fruit may resemble the Black Cherry (Prunus serotina), but there are a few ways to tell them apart. First, the size difference between the two trees is significant. The Black Cherry is a large tree, growing over 60 feet, while the Chokecherry is a small tree, usually only 10 or 15 feet in height. One can often find chokecherries on a spindly specimen whose trunk is an inch or so in diameter; black cherries are a fast-growing tree that quickly surpass that size and bear fruit that is mostly out of reach. The second way to tell them apart is by the leaves: the Black Cherry’s leaves are narrower and more pointed (lanceolate) in comparison to the Chokecherry’s, whose leaves are more elliptical (if not obovate). The third way to know which fruit one is looking at is to consider what part of the season it is. Chokecherries seem to ripen first, while summer is still in full swing and black cherries are still green and developing. Black cherries seem to ripen a few weeks later, when a fall chill is creeping into the night air. It is difficult to be exact about the timing as it varies by latitude, and from year to year.

Chokecherries can be found deep in forests, in islands of woody vegetation on prairies, and everywhere in between. They seem to bear fruit best where they get plenty of sun. My best chokecherry spots seem to be where they are left behind after logging opens the canopy or completely clears the forest. In Minnesota, some of the best places to look will be on state and federal lands where selective or clearcut logging have occurred in the last 5 to 10 years or so. Another good place to look will be along roadsides and trails within woodlands. They won’t be found where the ground is constantly wet, so stay out of the swamps. But on the sunny edges between swamp and forest could be productive. I’ve recently found chokecherries growing in places like these in the east central and northeast parts of the state. Chippewa and Superior national forests are good bets, along with state forests like Solana, Chengwatana, St. Croix, and Bowstring. Really, you could just pick any random destination in the forested areas of Minnesota and go (Pequot Lakes holds a chokecherry festival!).

Once harvested, I like to wash them in a colander and freeze them in quart-size freezer bags. When I want to make some chokecherry juice (the first step in making jelly, syrup, etc.), one bag of berries comes out of the freezer and, once thawed, goes in a pot with several cups of water. Now, this step is not scientific at all. Many websites will give exact measurements and times for simmering, but what I’ve found is that a quart bag will mix with about 6 cups of water and yield several cups of good, dark juice once it’s done. I will lightly mash the berries with a potato masher (and only lightly, because the pits contain a cyanide compound that you will not want to release) in order to break the skins and help them saturate the water with the chokecherry essence. I will usually simmer this for an hour or more, perhaps adding water, until I have the volume I need and the color I want- inky, dark purple. Once juice is made, I will often freeze it in one- to three-cup increments to use in recipes.

There are many recipes available on the internet for jelly, and I haven’t really settled on one. They differ by volume, sugar content, type of pectin used, and other factors. I would simply recommend finding one that fits your own criteria.

The first time I made jelly, it worked beautifully. There must have been enough acid in those cherries to make the pectin work. The next time I tried to make jelly, it didn’t set and I was left with 6 jars of canned syrup. I was rather devastated at the time (I’ve since come to like having that much canned syrup sitting around). Some recipes call for added lemon juice and some don’t; those that do often call for up to half a cup. In order to ensure fully-jelled success, I now make sure to add some lemon juice to the jelly.

The syrup made from chokecherry juice has become more dear to me than the jelly. I don’t know why; maybe because it just tastes so darn good poured over (wild) blueberry pancakes. I had thought once it would be good on vanilla ice cream, but the flavor just didn’t come through. It seems the delicate flavor of chokecherry is best suited to waffles and pancakes and the like. 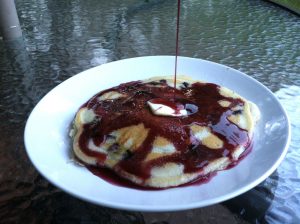 I prefer to make my syrup fresh when I want to use it. It may certainly be frozen- which I have done with good results- but it takes a lot of sugar to make any amount of syrup, and I usually don’t have more than one whole bag of sugar on hand. In any case, most recipes will call for approximately 2 parts sugar per 1 part juice. Once prepared, that ends up being both sweeter and thicker than I would like. To me, all you need is closer to 1 cup sugar per 1 cup juice. I recommend combining those amounts in a small pot, heating until the sugar dissolves, and tasting to see if more sugar is desired. Most people probably won’t need another whole cup to satisfy their tastes.

There are other uses for chokecherries, but it seems the recipes out there require you to make the juice first, so start there. From that point, you’ll have many options. Chokecherry pie is intriguing, but I haven’t yet tried it. I also recently stumbled across a recipe for chokecherry soda that I’d forgotten about; I’ll probably give that a spin this season. Anyway, if nothing else, do yourself a favor and collect enough chokecherries to make some syrup for those pancakes you’re going to make with this season’s wild blueberries.

For more suggestions on what to do with your chokecherry harvest, please visit my page What to Fix: Chokecherry Cuisine.

Now, get outside, and bring a kid!

4 thoughts on “Foraging in Minnesota: Chokecherries”