Skip to content
Foraging - Public Lands - What to Forage

Minnesota is host to two varieties of wild hazelnuts: American (Corylus americana) and Beaked (Corylus cornuta). The Beaked hazelnut grows mainly in the Appalachian and Northeast states, the western Great Lakes region, and West Coast states. The American hazelnut’s natural habitat is exclusively east of the Rocky Mountains, mainly from Minnesota to Maine and south to Arkansas and the Carolinas. They occupy slightly different ranges and habitats in Minnesota, but are both widespread and can often be found growing side by side. Their seeds- smaller than the commercially grown european variety- are eaten by gallinaceous birds (grouse, turkeys, etc.) and especially squirrels, chipmunks, and mice. 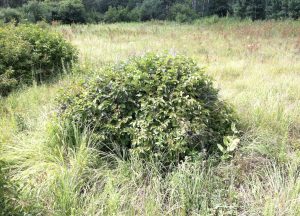 American Hazelnut is a common understory shrub that will also happily grow in savannas and open fields. It thrives in soils from moist and rich to dry and sandy, and its versatility is probably the reason it seems to have a slightly larger range in Minnesota. In a prairie environment, C. americana will form dense, round thickets, growing perhaps only half as high as they would in the shade of other trees. Maybe they are shorter because they are occasionally burned back, but in any case, it makes for much easier picking. The nuts themselves can grow singly, but usually grow in clusters from 2 to over 10. Its nuts are encased in rather sturdy husks which open by themselves, once dried. Ripening happens in the late summer, and the nuts are quickly abducted by wildlife. Since it is common to mature forests as well as early successional habitats, this shrub is popular winter browse among deer, moose, rabbits, and hares.

Beaked Hazelnut is also a common understory shrub. Unlike its close relative, however, it does not seem to like life out in the open. Its proclivity for shady habitats should be well known to Minnesota’s foragers and grouse hunters. The U.S. Forest Service states that in the Great Lakes region, “it is the most common understory dominant in aspen-birch (Betula spp.) forests…” and that “beaked hazelnut forms an often dense understory beneath quaking aspen canopies.” The Beaked Hazelnut is named for its prominent, jutting husks; to the casual observer, this is the easiest way to tell the two species apart. 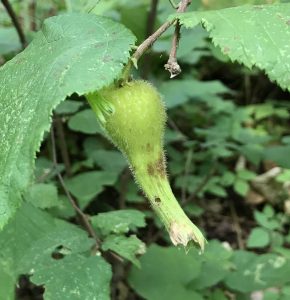 Finding either of these nuts to pick shouldn’t be much of a problem, especially in the northern half of Minnesota. State statutes do no expressly allow the harvest of nuts in state parks or state forests: “edible fruit and mushrooms may be harvested for personal, noncommercial use.” Culinarily, we draw a distinction between “fruits” and “nuts.” But botanically speaking, the fruit of Corylus is the nut, just as acorns are the fruit of the Quercus family, and samaras are the fruit of the Acer family. You may wish to call ahead for clarification before planning to harvest nuts from state parks, state forests, or wildlife management areas. But national forests are very permissive when it comes to foraging, so that is always a safe bet, along with private lands.

Our native hazelnuts are admittedly small. But don’t let that deter you from making use of them. Anecdotally, I have found that the bushes bear nuts more prolifically in sunny locations, and that nut size improves when: a) rainfall has been adequate, and b) the clusters contain smaller numbers of nuts (perhaps 3 or less). Like other nuts, they are valuable additions to our diets, with “good fats,” vitamins, and minerals. And like any foraged food, they are locally grown and organic, which is more than can be said for store-bought nuts. 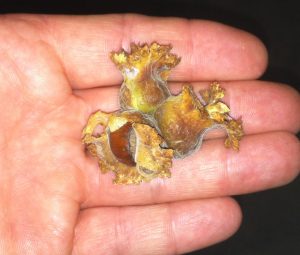 The timing of the wild hazelnut harvest is, like all other foraging, a nuanced matter. It could be weeks different from one year to the next, or from one part of the state to the next. But generally, they’ll ripen around the end of August and into September (around the Twin Cities, Labor Day is often right in the bullseye). A word of warning: you’ll not want to miss it because once they are ripe, the chipmunks and mice work non-stop until they are gone. They will not last long. I have found that there is a stage when the nuts are ripe, but the animals have not yet begun to pursue them. When the husks are still green but starting to brown ~and~ the nut will easily separate from the husk when peeled back, the time is right. The nuts will still be unmolested in this stage, but are ripe enough for human purposes. Sure, they will need to be dried, but this is a small price to pay in order to ensure they are still in the woods when you want them.

After the harvest, you’ll want to get the nuts out of the husks fairly soon; mold will set in if they sit piled up for days. I recommend wearing some well-fitting leather or rubber gloves for this task because the husks are covered with tiny bristles (My fingers have become thickly embedded with these bristles, and it can be uncomfortable). Again, if the nuts are properly ripe, they should be brown and fall away from the husks once the husks are peeled back adequately.

Put the nuts in a large container or tray in a single layer to allow them to dry. It’s hard to say how long they need in order to fully dry; that probably depends on several factors. If you can set them in the sun a few hours a day, that will speed up the process. I use a black plastic lid from an old recycling bin for this purpose, and I leave them in there for a week or two just to be sure they’re done. 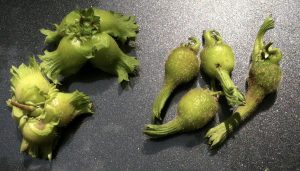 About this time is when the larvae of weevils (probably Curculio obtusus) will emerge from within the nuts. Earlier in the summer, an adult weevil drills a hole in the side of the developing nut and lays an egg (you can observe the scar left by a weevil in a beaked hazelnut in the photo). The grub eats and grows until it reaches a certain size, then eats a hole through the outside to leave and continue its next life stage in the soil. The bad news is, it is sometimes hard to tell which nuts have grubs in them. The good news is, if you leave them in your drying container long enough, they will all have left their nuts and you will be able to separate the good from the already-eaten. By waiting, I have never roasted and cracked open a nut that was damaged by a grub.

Once dried, the nuts may be eaten, but they don’t have much more than a raw nutty flavor. Roasting them, however, will bring out their true hazelnut character. How difficult is this? It isn’t: just put them on a baking sheet in a single layer and just stick them in the oven. Opinions vary on the method, but I have found that roasting them at a fairly low temperature- 225 degrees- will allow a person to check the progress of the roasting and remove them from the oven when they reach the desired flavor. I personally like them good and toasted, and that usually takes 30 minutes or more. I would recommend checking them after the first 20 or 25 minutes; take one out, crack the shell open, and pop the kernel in your mouth when it’s cool enough. It’s not precise, but timing will depend on your oven, the amount of nuts you’re roasting, and any moisture that’s left in them.

Cracking these wild hazelnuts can be a challenge, especially the small ones. The simple two-arm nutcrackers can get the job done, but hurt my hands after a while. The combination nut/seafood crackers with two cracking surfaces are more ergonomic and efficient. If you like Scandinavian design, the Drosselmeyer cracker holds promise, although I can’t yet vouch for it.

Of course, eating them is the best part….and the point of all this effort. Roasted hazelnuts have many uses, and the number of applications is limited only by one’s imagination. For instance, I recently added them to a cold pasta salad that would normally call for roasted almond slivers. One time, my household enjoyed them by the fire while watching a Christmas movie. They’re also good at hunting camp, enjoyed with a favorite beverage. And eating them just out of the oven is like the foraged equivalent of warm chocolate chip cookies. If you’re a nut lover, it’s hard to go wrong, so toss a few into the basket when you’re out foraging this year.