After a hot and sweaty couple of miles on the trail, it didn’t matter how cold the water might be or that there wasn’t really a beach. Once we’d found our campsite, taken off our packs, and changed, my kids and I took to the lake for our hard-earned reward. We spent about an hour playing in the water before going ashore for a break. I was made to promise we weren’t done swimming. After sitting in the shade and eating raspberries a while, my son said wistfully, “I wish we could stay here a week, just to swim and eat berries.” He was in paradise. We all were. 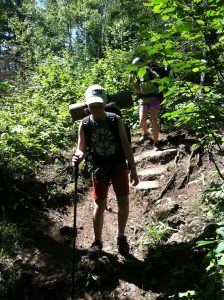 We’d followed the Superior Hiking Trail away from Silver Bay to the backcountry of Tettegouche State Park, and since the sign on the tree suggested we limit our stay to one night only, we knew we couldn’t stay a week. Despite having only two days’ worth of food with us, the sheer numbers of blueberries, raspberries, and juneberries we’d encountered along the way suggested otherwise. Since coming through the same section of trail two summers previous with my wife, I’d dreamed of bringing our kids there to experience the abundance of berries and a true backpacking experience.

There were two other outings a few years back that mimicked backpacking- in Wild River and Afton State Parks- but we didn’t venture far or encounter any physical hardship, and I’d carried the lion’s share of the gear. This time, however, they each wore serious backpacks (now that they were big enough to fit the packs) and carried their own gear plus some food and water. This was also the first time we did any serious cooking on the trail; I wanted them to have the full experience now that they’re old enough to appreciate it.

And appreciate it they did. They had a blast, and there wasn’t even much whining on the hike in. All I had to do was pick a time when it wasn’t going to rain while we were out, and success was all but certain. My kids (like most kids, I suspect) love to get out into nature and simply discover. While on the trail, their eyes were always looking, noticing. I had to answer a lot of questions- some thoughtful and insightful, some more pedestrian. In camp, they alternated between reading their books, eating raspberries, and doing more discovering. 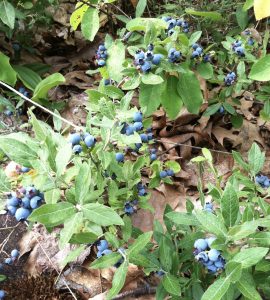 At one point, they asked if they could go up the hill together to see what was up there. How could I refuse? They were clearly enjoying themselves.

When it came time to eat, they were enamored with the freeze-dried meals I brought. But to my surprise, the wild berries overshadowed anything edible that came from home. Our timing with regard to the blueberry crop was impeccable, and they were available in generous proportions. And the juneberries seemed especially plentiful this year, as did the raspberries. We even found a few thimbleberries and strawberries (they proudly recounted later how we ate 5 different kinds of berries). My daughter was particularly taken by the handfuls of blueberries combined with handfuls of granola.

I believe finding our own food scratches a primal itch that lies dormant now in the deep recesses of the human experience. It’s wonderful to see how kids light up when they have the opportunity to partake in this kind of harvest. I’m grateful there are still lots of places where we can give these experiences to our kids. I hope they are still available generations from now for this and many other uses.

Got kids? Want to expose them to nature and wild places? Take them backpacking, or at least for a serious hike on a footpath through the woods. Pick a good place and go when the weather is good, and satisfaction is pretty much guaranteed. Plan your trip to coincide with spring wildflower blooming or berry season or fall colors, and you’ll have more than just an ordinary walk in the woods waiting for you when you arrive.

About 20 Minnesota State Parks have backpack camping, according to the DNR website, from Lake Bronson to Myre-Big Island. Afton State Park, for instance, does not have a drive-up campground, but instead has 28 hike-in sites with only a short distance to walk, with firewood and water available in the camping area. With parks scattered throughout the state, a person wouldn’t necessarily have to drive all day just to get there. Unfortunately, sites do have a fee and require reservations (additional fees). Distances to campsites can be well under a mile or several miles. Many are situated along rivers or lakes, so fishing or swimming from camp may be an option. 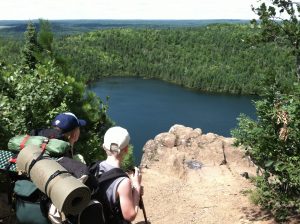 The Superior Hiking Trail is easily one of the best resources of its kind in the country, not to mention just in Minnesota. There are numerous places to access the trail from Duluth almost to Canada, so there is no shortage of opportunity. Parking lots, campsites, and other amenities are all there waiting to be used free of charge. If you have the chance, stop in to their headquarters in Two Harbors to pick up maps and all the latest information.