Whether you call it Maitake, Hen of the Woods, Sheepshead, or just Bill, Grifola frondosa is a sought-after mushroom. It doesn’t seem to get the hype that morels and others do, but it is, in my opinion, one of the best tasting, most versatile, all-around great mushrooms. I get downright giddy when the summer is coming to a close and I can start checking my favorite spots.

Throughout the season, I see a lot of excitement on social media over some really mundane mushrooms like Pheasant Back and Chicken of the Woods. Frankly, I don’t get it. Don’t get me wrong; I eat those too when I find them. But for me, there are few mushrooms I’d rather find than Maitake when I head out the door. 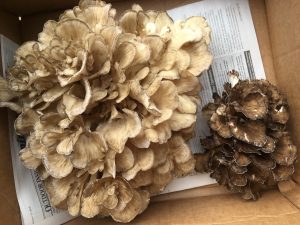 Hen of the Woods is a parasitic mushroom that will live and fruit for many years while its host tree is still alive (as well as after it dies), unlike most other parasitic (and saprobic) fungi. In that it acts both as a saprobe and as a parasite, it is somewhat atypical. However, in typical fungal fashion, it defies hard classification. What a maverick. Gotta love a maverick. Anyway, it will typically be found sprouting from the ground near an oak tree in the fall. Many will swear on white oaks, but I have found at least as many growing near red oaks. There are some sources that report them growing from maples and other hardwoods, so you might want to keep that in mind. The time period in which this mushroom seems to be most easily found in Minnesota is around Labor Day and the weeks following, when the nights start to get chilly. Of course, a good rain can be a triggering event; do what you can to get into the woods after heavy showers at that time of year.

I would like to tell you that this is a good mushroom to find on public land. It’s certainly not impossible, but given the history of rigorous logging in Minnesota on state and national forests, I tend not to find many mature oak trees on public lands. Sure, they’re out there, and I know of some great spots. State parks, for instance, are a better bet than state forests and wildlife management areas. I’d hate for anyone to drive an hour or more out of their way only to find aspens and basswoods; perhaps do a little research before going somewhere new. For the most part, I’ve found that private lands and unexpected places hold greater concentrations of those old oaks that are more likely to grow Hen of the Woods: city parks, farm woodlots, college campuses, etcetera. 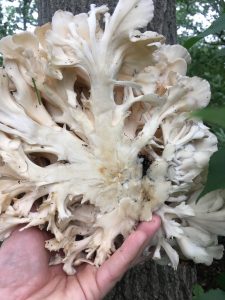 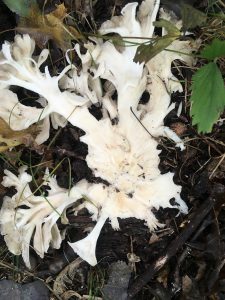 What is considered one Maitake mushroom- composed of many branches and caps- actually grows from a single branching stem (or single point of emergence from the substrate) which is usually quite irregularly shaped, as can be seen from the pictures at right. (Also shown is how it can be hard to cut from the ground in just one piece!) It can be the size of a softball or the size of a beach ball, depending on conditions. Color variations with this mushroom can be considerable, especially compared to the rest of the mushroom world. I have harvested some that were quite light in color (which I assumed were old and dried out upon first seeing them) and others that were chocolate brown and dark gray, all on the same day and from one relatively small area. The pores on the underside of the caps or “petals” are white, yellowing with time. As with many polypores, the pores also seem to be smallest when the mushroom is still young, and thus size and color can be an indicator of age. Another indicator of age is the presence of spores underneath; whenever I see a white dusting around a hen, I leave it there. I just don’t care to mess around with dried out/tough mushrooms.

This delicious fungus is generally thought to be foolproof as far as mushroom poisoning goes, so it is a good one for beginners. That is not to say it doesn’t have its look-alikes, however. Fortunately, they are not going to kill you. Polyporus umbellatus is edible, and I’ve only seen it once. I wish I’d known at the time it was edible, and supposedly good! Meripilus sumstinei is also edible, but may cause an upset stomach. 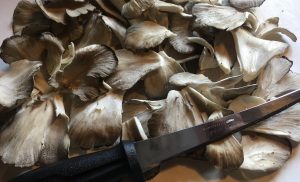 Maitake is one of those mushrooms- like morels- that are known and loved around the world. It is, of course, delicious. There is some controversy, but the general consensus is that it possesses medicinal qualities. There are claims of immune-boosting and anti-cancer properties, blood sugar and cholesterol regulating effects, and more. The nature and extent of those claims is where the contention lies. What is not in question is its regular nutritional content, which includes Vitamin B, Iron, Copper, Magnesium, Potassium, fiber, and even protein. Since I am not a professional mycologist, herbalist, doctor, or nutrition scientist, I will decline to wade into controversy.

I think part of what makes a hen so attractive is the sheer mass possible in just one find- there can be quite a lot of mushroom. It is tempting to look at that lump of several pounds and see many meals unfolding before your eyes. Unfortunately, once you clean it up and cut off the stems, you often end up with much less than you thought. And believe me, you’ll want to cut the stems from the caps- they can be quite fibrous, and downright woody when large.

The versatility of the Hen of the Woods is a major selling point. It seems many recipes call for sautéeing mushrooms in butter; when sautéed, the Maitake maintains a favorable texture. It can also be successfully dehydrated and used for many months after harvest. One of my favorite ways to use dried hens is to drop them into soups I make. Once dried, it can also be ground into a powder and used as a flavoring agent. Dried is good, but I try to use as much fresh hen mushroom as I can. Sometimes it will make its way onto a homemade pizza. I always look forward to making stroganoff and adding it to pasta dishes. I will also usually thaw out some venison and make a fantastic Jaegerschitzel when I have fresh Maitake (Hank Shaw’s recipe has never let me down). Mushroom quesadillas are also popular at my house, and if any small amounts are left over, they usually get used up with fried eggs in the mornings.

We had a fairly rainy day here earlier this week. I was itching to get out and see if I could scrounge up any hens, since school started this week and that’s when I usually start looking. Sure enough, I picked up 4 specimens- 1 medium and 3 small. Those certainly weren’t as a result of the previous day’s rainstorms, so I’m looking forward to going back out in a few more days. I think there is a significant chance of a great harvest in the next couple weeks, and I hope so because the rest of this mushrooming season hasn’t been good to me. A decent Maitake season might just make up for the disappointments I’ve suffered when it comes to other mushrooms. And while it can get a bit crazy when you have pounds upon pounds of mushrooms to clean, eat, and preserve, it sure is hard to resist getting myself into that situation.