It all started on an October morning, almost a year ago: I was cruising up highway 65 with my dog for an overnight grouse hunting outing in the McGregor/McGrath area. I’d had too much coffee and, well, had to go.

How bad? I knew I wouldn’t make it to my destination, only about 5 miles distant. So I stopped at the first opportunity, a small area to pull off the highway next to a drainage ditch. As I hurried down the berm next to the ditch, a pair of wood ducks made my heart stop when they flushed from under the bank next to me. This of course hastened the inevitable. Luckily, I didn’t end up needing a change of clothes. But the combination of surprise, discovery, and frantic zipper work cemented that moment in my memory and sparked an idea.

Wood ducks are an especially treasured quarry for me, so after returning home, I looked into all the similar places in that area where I might be able to stalk along the drainage ditches that run through the peat bogs. Paper maps, satellite photos, and online resources (DNR and otherwise) were all consulted. Before long, I had identified at least a dozen potential spots to try, all on public land. I began to think of it as “Spot and Stalk” duck hunting, because while I’ve done some jump shooting, those ditches favor the ducks, and success depends on spotting them well before they can spot you.

So last week- on a more moderate amount of coffee- I hit the road and finally put my theoretical duck hunting strategy to work. The first spot that day yielded two wood ducks, of which I took one. This immediate success was enough to keep me going the rest of the day; a merganser, some grebes, and a flock of sharp-eyed teal were all I encountered over the next several hours (and miles). Overall, there were fewer ducks than I’d hoped, but my plan was mostly working.

The last stop on that first day was a large WMA with miles of ditches and a wooded river running through it. There was less than an hour before shooting time ended, so I only saw the tip of the iceberg. The marsh was full of wild rice and showed promise. I returned at sunset to see where the ducks were flying, so I might put myself in a good position the following morning. Flock after flock of wood ducks and mallards passed from the nearby river bed into the marsh at low altitude; that was enough to convince me. As the sun came up, I was lucky enough to get two drake mallards during the morning flight. I was thrilled; I can’t remember the last time I had two mallards to take home. This was an energizing bonus, and I couldn’t wait to get back to more stalking.

My next destination was an area with yet more drainage ditches in the peat bogs south of McGregor. My heart skipped a beat when I spied four ducks dabbling around a small beaver dam- in exactly the place those two wood ducks put the idea in my head a year ago. As I crouch-walked through the high grass and goldenrod, I stopped occasionally to peer through my binoculars and make sure I still knew where they were. When I walked up and over the berm to kick them up, there was a split second before they flew. I picked out a handsome drake and kept my eye on him as they took off. At the shot, he fell just on the other side of the ditch in some emergent vegetation.

It was too far and thick for my fishing rod retrieval method (see below), so I knew I had to find a place to cross in my new hip waders. I looked around the corner and realized there was no dry route available- my best chance was to find a narrow part of the ditch and hope for the best. As it turns out, chest waders would have had been a better choice; the water was about 4 inches too deep for my hip waders. Thus, as fate would have it, I was meant to wet my pants in that place one way or the other. This was of no consequence, however, as I was pleased to retrieve my prize and change into dry clothes at the truck. 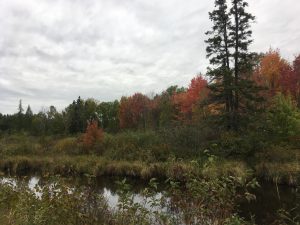 Do some scouting from home. I did most of my work with the help of internet resources, which helped greatly once I arrived in person. These peat bogs and other similar places can be found throughout much of the state. In addition to the peat bogs of central Minnesota, I have also seen similar drainage ditches in Lake of the Woods and Beltrami counties, St. Louis County, and Carlos Avery Wildlife Management Area. In northern Minnesota, there are large tracts of state and national forests to scour; oftentimes, one large WMA or tract of forest land can often be enough to spend all day working through.

Look for the ditches with raised berms next to them. Once you’ve looked over enough satellite images, you’ll have a good idea what that looks like. I imagine some or most of these were meant to be road beds to some degree, and sometimes wildlife managers will have even mowed them (this makes for easy walking, but hard to conceal oneself). A lot of ditches will have no berm whatsoever. Steer clear of those; it can be really rough going, if not through swamp or floating bog, which is even worse.

Think about how to retrieve your ducks. Probably the best advice in this respect is to choose your shots; only retrievable ducks can be retrieved. I’ve been known to swim for downed ducks, but obviously prefer not to do that. If you have a boat, that’s helpful, but of course this whole strategy assumes you’re not hunting from a boat. I brought a rod and reel with a float and weights to help pull ducks ashore from open water. This worked with the mallard that landed smack in the middle of the ditch, however, it was useless when the wood duck fell in long grass. Consider having a pair of waders along. I chose to buy hip waders because I could walk in them without too much effort; chest waders would have been too hot and cumbersome, not to mention that much heavier in my backpack.

Bring binoculars. This won’t work if you can’t look hundreds of yards ahead and spot the ducks in the water or loafing on shore. This is one of the only advantages humans have in this scenario!

Consider the rivers. If I’d had more time and knew better going in, I would have planned to hunt that wooded river much more extensively than I did. Most of the ducks I saw in the morning were flying from the marsh and into the river bed. I think they were probably going to sit on logs (as I observed from a distance) or sit in small backwater channels.

This is a great one-day public land adventure, and highly enjoyable, if only to be out in the field in the fall. Equipment required is minimal and the investments in research and driving time are not onerous. Throw in a sleeping bag to make it an overnight trip if you like. In hunting there are no guarantees, but if you’ll go and give it a try, I think you’ll agree it’s never a goose chase. 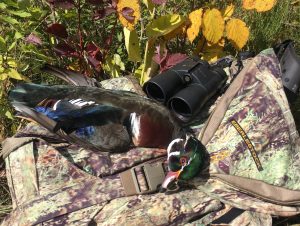