The fourth Thursday of November is still more than a month away, but now is the right time to go out and find that Thanksgiving staple: the cranberry. Didn’t know cranberries are growing wild in Minnesota? You’re definitely not alone.

Sources generally indicate that even in the best circumstances, foragers should not expect large harvests. Anecdotally, I have found this to be true. But there are plenty of places to look on public lands from the north Metro area, to the bogs of Aitkin and St. Louis counties, all the way over to the vast peatlands of Beltrami County. State and national forests as well as Wildlife Management Areas permit picking, but Scientific and Natural Areas do not. Private lands are always an option, assuming permission is obtained.

My first attempt at finding wild cranberries- just after Thanksgiving- was in a fairly large bog. I’d taken my kids along, and that place was thick with leatherleaf. After slogging around a while, it was clear the diminutive cranberry plants would not likely be found. The next day, I headed to a floating bog that surrounds a pond in the woods. The moss was thick and pillowy, and it was immediately clear that the plant community there was much more diverse. It yielded a few dozen cranberries in less than half an hour. They were scattered around the hummocks there and in a nearby spruce/tamarack swamp, in singles and small groups. Since the berries had been exposed to many days of freezing conditions, they were almost all soft, like squishy grapes, and not firm and pithy like the ones from the grocery store. Their taste, however, was unmistakably similar to their commercially-available counterparts. 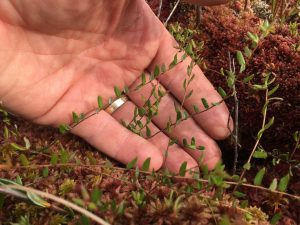 A few weeks ago, on the last weekend of September, I went out to see if the cranberries would be ripe (and still firm). Indeed they were, and I pocketed enough to add to an apple crisp (several were eaten fresh right there in the swamp). This was an especially beautiful time in the swamp, by the way, as the fall colors of the mosses and wetland plants were coming to a peak.

Both species can be found separately in different habitats, or in fairly close proximity to each other. Accordingly, I wouldn’t bother differentiating between the two species when trying to find and collect them. Simply identify potential locations and see what you find. As it happens, I’m fairly sure I found both species on my first successful outing, based on the plant samples I collected. Since the berries tasted the same, though, making the distinction between the two goes beyond that which practicality requires, and only serves to satisfy one’s scientific interest.

As a relatively new cranberry forager, my experience has been that this is an exercise in novelty and satisfaction; one cannot necessarily expect to fill the freezer. Still, as an added ingredient to a recipe, a little can go a long way. In other words, you might not find enough to make a bowl full of cranberry sauce, but they would be a great featured ingredient in breads and other items. 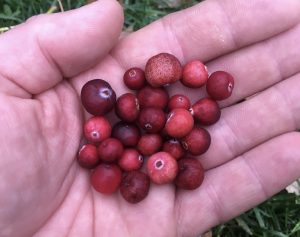 Once you’ve found them, feel free to pop one in your mouth. I love that fresh, tart blast that lingers on the tongue. Yes I know, we should really wash everything before we eat it, and advice for the masses usually reflects that. But for me, berry picking is a disappointment if I can’t eat while I pick.

Once you get them home, your cranberries should last in the refrigerator for several days, if not several weeks (dehydrating is probably also an option, but I can’t yet vouch for it). On more than one occasion I have added them to a regular apple crisp made with Honeycrisp apples from our tree. That sweet/tart combination has been received well at our home, and adding them to an apple pie seems a natural extension of that idea. I look forward to making a cranberry walnut bread later this fall, once our wild walnuts are fully dried, and I hope to collect enough to try them in steel cut oats also. Our modern cultivated cranberries have been developed from Vaccinium macrocarpon, so any way you might use store bought cranberries is potentially a way to use wild ones.

The MEA break is right around the corner, and that is typically a big time for my family in the northwoods. I hope to take my kids as well as some of my nieces and nephews out for a cranberry hunt, then return to the cabin to bake something up. Kids like to pick berries and they love to contribute, so I have no doubt they’ll enjoy both picking and eating.