As many times as I’ve suffered from bitingly cold hands and fingers, there is only one time in my entire life that could possibly eclipse the way my fingers felt recently. When I was pretty young, my dad took my brother and me out in the boat to do some last-minute fishing before heading home from the cabin. All I remember was learning how to set the hook, the big juicy bluegills we boated, and my hands being so cold that I probably cried.

Late last month, as I gripped my canoe paddle without actually feeling it, my old record for cold hands seemed broken. Unlike that memorable day from my childhood, however, I definitely did not shed any tears. It was the last morning of my inaugural whitefish netting trip to northern Minnesota. The air that day was stuck in the low 30s, pushed around by a light wind, and punctuated by intermittent drizzle. The previous four days, unfortunately, were pretty much the same.

Whitefish netting- like fur trapping and wild rice gathering- is one of those ancient pursuits that has seen participation dwindling through the decades. It’s my impression that this is mainly due to what I call the “apprentice” nature of learning these activities: a person is typically mentored in the beginning while they learn the ropes, and pass on their knowledge in time. In our increasingly modern and urban world, there are simply fewer people taking it up. What’s more, the materialistic elements of our culture have permeated the outdoor industry, and with no special or high-tech merchandise to hustle, netting just doesn’t receive much attention in outdoor media. Without my own mentor, I knew the learning curve would be steep, and the lack of information available on the subject made me feel like I was stumbling around in the dark sometimes. Still, I was determined to try this for myself.

The day I arrived, I set up camp, took my puppy out for a quick grouse hunt (largely to help him burn off some steam), then loaded up my canoe at the boat landing. I was eager to get started, but intimidated by doing something completely new, on a lake I’d never seen before, all by myself. At least there was no wind, and paddling was a piece of cake. It was hard not to notice the buoys of somebody else’s net….right by the boat ramp. I didn’t really mind, because I was determined to put more effort into it than they obviously had, and so continued to my first prospective net location. 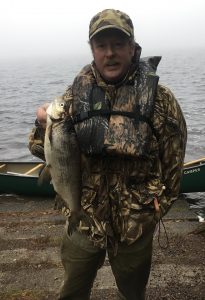 That one was occupied by another net, and I began to worry that perhaps this lake might be more busy than I’d anticipated. The next spot- between an island and an emergent rock- was free for the taking, so I strung my net out in about 5 feet, over a rocky bottom. When my dad and brother arrived at the campground the next day, my brother accompanied me to check it. There was one whitefish entangled in my net, along with probably five big white suckers. It was good to have a little success the very first day.

The next few days went similarly: check the net, extract whitefish and suckers, reset and/or relocate the net, go grouse hunting, come back to dry ourselves and the dogs, eat, sleep. One day there was a chunky walleye in the net; another day there were two dandy crappies. These game fish had to be thrown back according to law, but it was a pleasure to see and handle them nonetheless. One morning we paddled out in the dark and sat over duck decoys for an hour or so, but didn’t repeat it due to a general lack of ducks left in the area. We were never at a loss for something to do, but the persistent rain and wet conditions did keep us from doing as much hunting and exploring as we would have liked.

In total, I ensnared eight whitefish ranging from about 14 to 17 inches long. It was not a deluge of fish, but a clear success. One fish was prepared there as part of Forager’s Fish Soup, and the other seven made their way home to be smoked. Since members of the whitefish family are high in fats- especially the Omega-3 fats- they are highly delicious and one of the most nutritious fish around. 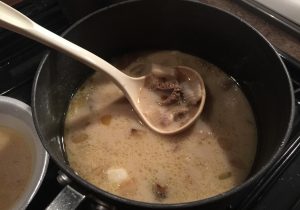 Those other guys finally showed up to check their nets on my fourth day there, and they hadn’t caught any whitefish. I must admit, seeing local netters catch nothing but suckers made my modest tally seem all the sweeter. I look forward to upcoming meals of whitefish this winter, as well as the next chance I get to wet my net.

If You Want To Try Whitefish Netting

Start your trip by reading and understanding the rules for whitefish gill netting. There are not a ton of rules, but unless you’ve ever gill netted for whitefish or ciscoes, you will need time to become familiar with them and they will also inform your preparations. The Minnesota DNR website will have the whitefish netting regulations as well as resources like their LakeFinder feature to help you find places to fish. You can also find contact information there for fisheries offices, whom I recommend you call to ask about specific lakes.

Nets made specifically for Minnesota whitefish/cisco netting are available from Duluth Nets. They offer a wide range of netting products, and can make custom nets as well. While you’re at it, do yourself a favor and order a fish pick from them; it can be invaluable when trying to untangle several layers of net from fish gills while you have no feeling in your fingertips.

Bring something to measure the depth of the lake while you’re getting ready to set your net. According to Minnesota regulations, your net must be in water six feet deep or less. For this, I picked up a 10-foot length of 1/2” PVC and marked it in 1-foot increments with a large mark at 6 feet for quick probing/measuring. Jabbing this pole down into the bottom of the lake helped me evaluate the substrate quickly, as well as feeling for rocks while drifting with the wind.

Much or even most of whitefish netting territory is pretty far north, nestled in state and national forests (there are surprisingly few lakes within the BWCA that are open to netting, but there are some). But Chippewa and Superior National Forests offer millions of acres of public lands and dozens of campgrounds, so there is no lack of opportunity if a person wanted to combine netting with other activities in one trip. The Forest Service offers “Rustic Campgrounds” which are often situated on good fishing lakes, and are free of charge. There are also fee campgrounds in both state and national forests, but water might not be available late in the season. Call ahead to be sure. In addition to campgrounds, the option of dispersed camping is also always available.

Cost of this excursion:

$110 for a whitefish net from Duluth Nets

$0 for camping in a Forest Service rustic campground 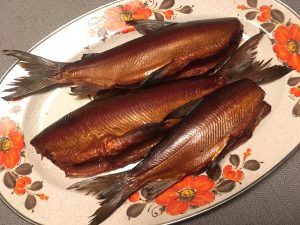