It was the third day of deer season. My dad, my brother, and I were done hunting and were standing around by the new blind I’d been sitting in. I glanced westward and noticed somebody in blaze orange walking straight toward us across a neighboring soybean field. Having no idea who it was and what they might want, we went to meet him at the property line. When we got close enough to each other, I could see he was wearing a badge that identified him as a state conservation officer. He introduced himself as Jeremy, we shook hands, and I invited him across the fence so we could talk properly. He asked us about the hunt and checked our licenses.

When we indicated we had harvested some deer, he asked to see them. We said that would be no problem, but that the deer were a couple hundred yards farther into the property, and directly away from his truck. We encouraged him several times to drive around and meet us, to save him from quite a bit of extra walking. He declined, saying he didn’t mind and joked that he “needed to get his steps in for the day.” 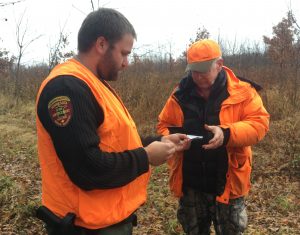 So we all took off for our parking spot. Jeremy was very jovial and complimented the condition of the habitat. After inspecting the deer, we all had a good conversation together. He asked for our cooperation in a local enforcement matter, and we took advantage of his expertise by asking questions about the hunting rules. Specifically, we have always considered the regulation about the discharge of “a firearm within 500 feet of a building occupied by humans…” unclear and/or confusing, especially with regard to private property. It seemed the more we asked, the less clear it became. Fortunately, the one point that was most germane to our situation was made perfectly clear. Unfortunately, the understanding I came to after that conversation is still hard to reconcile with what is actually written in the regulations.

Since we were done for the day, my brother offered to give Jeremy a ride back to his truck (which he accepted) and had more opportunity to talk with him. When we all got back together that night, there was much discussion about our encounter with him. It was interesting to observe how he did his business and then dissect it collectively. We can never know, but one of our hypotheses went like this: We must have raised some red flags for him when we encouraged him not to walk through the property. The more we insisted, the more we probably seemed to be trying to hide something. He was very nice and patient about it, but we agreed that in the end, there was no way he was not going to follow through. I feel silly having possibly made him think we might be up to something underhanded; I can only hope the time we spent talking with him helped him know that we were not only hiding nothing, but very much wished to stay within the law.

In late October, I went whitefish netting for the first time. I’d been considering trying it for over a year, and had done a fair amount of research; key to my preparations were the regulations pertaining to gill netting. The regulations for whitefish/cisco netting are not included in the annual fishing regulation booklet, but posted online. I think this must be due in part to necessity, since the lakes open to netting change from year to year, and some can open and close on short notice due to weather changes. Anyway, I printed out the latest edition and brought it with me on the trip.

While way up in Lake County, I had a couple questions and consulted my printout. What I found was not helpful, but in fact very frustrating: two different rules that I was sure were in previous editions were nowhere to be found. One concerned the way net dimensions are measured, and the other had to deal with bycatch (non-target species). Not knowing who to ask, I made a mental note to call Dick, a fisheries department employee I had previously been in contact with.

A week or so later, I followed up on my concerns. I think I had to leave a message, but Dick called me back and said he would send some emails up the chain of command and see what response he would get. He called again the day before Thanksgiving to give me some updates. They are as follows:

-The net measurement stipulation has been restored to the regulations, supposedly updated on October 25th. The funny thing is, while I talked with him on the phone the first time (November 7th), Dick and I both pulled up the netting regulations that were posted to the website, which was the October 11 edition. It is not clear why the regulations updated October 25th were not yet available on November 7th, but in any case, they are available now.

-The rule I thought I remembered regarding bycatch seems to be in limbo. Dick looked up the state statutes for the final word, and while game fish must be immediately released (as we both thought), rough fish may be retained (as he thought). There has been no rule added or restored to reflect this.

-While he was reading the statutes- 97C.805 NETTING LAKE WHITEFISH AND CISCOES- he came across a blatant contradiction to the rule stating that a netter may only use one gill net. Under Subdivision 2, it states plainly that “A person may not use…more than two nets”.

As far as I know, that is where things stand currently.

I’m still quite bothered by the problems with the whitefish netting rules. As somebody new to the sport, I depended on the rules provided to tell me everything I needed to know. From an enforcement standpoint, it must be difficult to expect ordinary people to know at all times what is allowed and what is not when things are not spelled out, not to mention when two rules stand in contradiction.

As somebody new to whitefish netting, I tried to become familiar with all the rules before I began. I was certain game fish had to be released; I seemed to remember having read it, but common sense told me keeping them was not allowed. That wasn’t a big problem. But I remember saying at the time that I wished I could keep some of the suckers in my net, but without any way of knowing it was allowed, I didn’t think I dare do it. I now consider it an opportunity lost. Furthermore, it irks me that a rule regarding the fish that can and cannot be kept from a gill net would not be included in gillnetting regulations.

I suppose a person could dig deeper; after all, I myself have turned to state statutes when trying to find more obscure provisions pertaining to outdoor activities. But even though the rules follow the statutes, I consider the statutes no better than a tertiary source to ordinary people (the primary source in this case being the annual fishing regulations, the secondary source being the whitefish netting supplement). Few people probably know that state statutes are available to consult online, and no one I know has ever told me that they have. If knowing state statute is necessary to comply with the law, then that is an unreasonable expectation for ordinary people taking part in the outdoors. It is an obstacle to participation.

I’m certain nobody wants to go afield and come home with a fine. What, then, can we do to stay within the boundaries of the law? Here are some of my thoughts based on my interactions with Minnesota DNR staff this year.

Read and understand the regulations. It seems obvious, but this is the place to start. When I read in Outdoor News about some of the infractions that conservation officers are handing out citations for, it is obvious some people have no idea what the rules are to begin with. There’s no better remedy for that than reading the regulations. “The way things used to be” counts for nothing, word of mouth is unreliable, and common sense doesn’t always apply. When I used to work in outdoor retail, I came into contact with many fishermen. There were many times we had to set a customer straight about some rule or another, and I learned that sometimes the regulations aren’t clear due to omissions or convoluted wording. So, every few years I try to read the entire booklet from front to back, which includes new rules and everything I think I already know. It takes a while, but I think it’s worth the effort.

Bring the regulations with you. Pick up a copy or two, and try to keep them available to consult while in the field or on a trip. Things come up and questions arise that weren’t previously considered. For instance, when I put my tag on a deer my brother shot this year, I wanted to be sure I was doing it by the book, especially because that was something I’m not sure I’ve done before. It was a good thing I did, because hours later my work was checked by a conservation officer.

When in doubt, ask. Unless you’re the expert, there is always somebody who knows more than you do. I have found it enormously helpful whenever I call and talk to somebody from Minnesota DNR, whether it be in Fisheries, Wildlife, Forestry, or Enforcement. I always learn something new. Of course, it’s the enforcement end of things that is ultimately most important, since observing the law is one of the pillars of taking care of our resources. The way I figure it, if they can’t ultimately provide me with clarification, at least I’m on record as having done my due diligence.