“It’s a work truck. You’re a smaht guy.” Those were the last words spoken to me by salesman Sean, through the truck window, as I drove my F-150 Heritage off the lot in April of 2004. After I rolled the window up, my wife and I looked at each other and wondered aloud what that was supposed to mean. It seemed nonsensical. We laughed and shrugged it off, but never forgot that moment. I’m not sure what made those words so immortal, whether it be their cryptic nature or because it was fun to say “smaht” in our best manufactured Massachusetts accents. Either way, they stuck with us. After fourteen and a half years, however, Sean’s absurd adieu now seems strangely prophetic.

With its vinyl floor, bench seat, and crank-driven windows, we knew we were getting a less-than-decked-out model, but that’s what we wanted. As new graduate school graduates, what we needed was something to pull a rented trailer on the move back to Minnesota from Boston (and attend to our needs once we got there). Well, it did that with no problem. It was recommended that when towing, overdrive be turned off to avoid damaging the transmission. I winced when I thought about how terrible the gas mileage would be over the long 1,400 miles. To my surprise, the hardy V8 took it in stride, getting us home with surprisingly good gas mileage and not a hint of overheating. Since then, we’ve loaded the bed and employed its towing capacity to move us, family members, and friends with style. And countless times I’ve loaded it full of firewood, gravel, or half a lumberyard, and it never so much as let out a squeak. It’s a hauling truck… 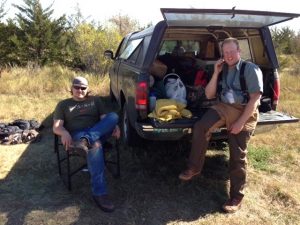 Later that first year I continued putting it through its paces, bouncing down muddy roads through the woods and hauling all manner of hunting and fishing gear. More than a few times, I tossed a jon boat in the bed and took off on a new adventure (I still do that, even as recently as a few weeks ago). When the weather cooled, it proved its worth as a go-anywhere ice fishing beast that would take me and my sled anywhere I wanted to go. My repertoire of lakes expanded greatly in pursuit of everything from crappies to lake trout, and there’s no way that could have happened without my pickup and its unfailing 4 wheel drive. On more than a few occasions, I set up a cot back in the bed and spent the night in the woods or on the prairie, which allowed me to stay wherever the adventure took me. Sure beats a motel that way. It’s an adventuring truck….

Before long, my wife and I started adding to our household, which began to stretch the capacity of “Harry,” as we came to call him. First was our dog, Johann, who rode at my wife’s feet with no problem. Then came the babies. With the extended cab, we were able to strap baby buckets and booster seats in with room to spare. Even though we’re up to two kids and two dogs, we haven’t run out of room. Actually, that’s not quite true. Our two pre-teens are now tall enough that they require more legroom, which is just a reality of growing up. Fourteen years ago, I never could have foreseen that need (today’s SuperCrew cabs would do the job). Heck, I never would have even believed that I would keep one truck for so long, but that’s a testament to how useful, rugged, reliable, and downright indispensable this truck has proven to be. So much so, that I’ve actually put off replacing Harry for the last couple of years. He’s pretty much a member of the family at this point; I hate to see him go. It’s a family truck….. 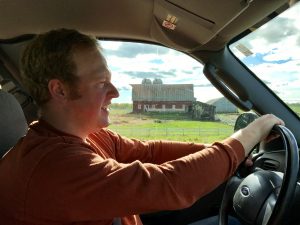 Of the past 182,000 miles, I have driven probably 180,000 of them, with my wife driving almost all the rest. I have taken that truck from the giant freeways of the Northeast, to the logging roads of Minnesota’s Northwoods, to the dusty 2-tracks in the middle-of-nowhere Montana. It’s gone everywhere I’ve gone, in almost any weather conditions conceivable, no matter how rough or remote the journey, and this truck has never once disappointed me. It was built Ford tough, as they say, and it still has a lot of life left in it. I just wish we didn’t have to part ways so soon.

So, was this a worthwhile investment? Yes. Would I do anything differently? Nope. Harry has done everything I’ve asked of him, and usually with better fuel economy than you can expect from a pickup (routinely up to 20 MPG on the highway).

And so, with the testing period finally complete, I can finally say it’s a hauling truck, an adventuring truck, a family truck, and at the end of the day, it is without a doubt a work truck. I really am a smart guy.