Skip to content
Foraging - Mushrooms - Public Lands - What to Forage 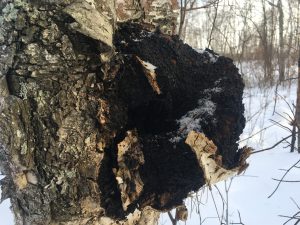 If there was a beauty contest for fungus, I know one that would probably come in last: chaga. Resembling a black scaly scab on the wound of a birch tree, there is really nothing attractive about it.

But for every point it loses for its ugliness, it makes up for in medicinal qualities. Well, that’s the reputation it has, anyway. It has quite a following among select foragers. However, that could possibly be chalked up to a lack of other things available to gather through the cold months.

Chaga is a parasitic fungus that attacks healthy birch trees through superficial wounds and slowly eats them from the inside. A birch tree I cut down this past winter was sorely afflicted by this organism, and while its crusty canker was only about 2 feet off the ground, the rot inside the trunk could be seen from the stump right up through the first 18 or 20 feet off the ground. Near the bottom, it made a fascinating rose-petal pattern in the wood. Farther up the tree it looked like an ordinary rot; every cross section in between revealed a different pattern. 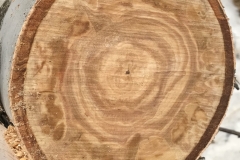 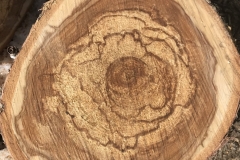 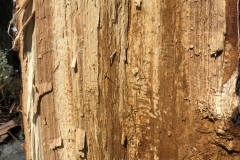 This particular fungus has a fairly narrow range of growing conditions; it has a special relationship with birch trees, which of course relegates it to northern regions. Researching this organism, one will find mentions of it growing on other trees, but these are few and far between. Anecdotally, I have never once seen a growth on a non-birch that I thought might be chaga (I must admit I don’t go around looking for it on non-birches, but, still). However, I have seen several pictures posted to social media of growths on other hardwoods that folks were hopeful were chaga; not surprisingly, each one looked to me like an ordinary burl. In fact, if you think you’ve found chaga on any tree that is not birch, the odds are overwhelming that you have found cherry burl, maple burl, etc., that have no value except to woodworkers. 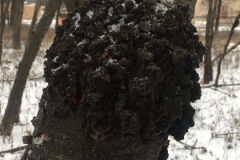 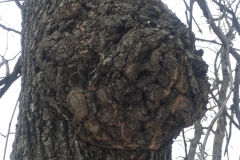 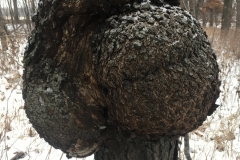 Harvesting is typically done with a hatchet or axe. As a result, there is a chance for damaging the tree if not careful, and this could be the reason chaga has supposedly been excluded from the list of harvestable goods in state parks (though I still have yet to find mention of it in official rules or statutes). National forests (namely Chippewa and Superior) are much more permissive than our state lands when it comes to foraging, so you might just want to start there. This is just as well, because the concentration of birches is generally much higher in Itasca, St. Louis, Lake, and Cook counties than, say, Morrison, Kanabec, or Anoka counties. As is often the case, private land is also a go-to for this foraged item. On an anecdotal note, I have noticed a higher concentration of chaga infections in low/moist environments like lakeshores and swamp edges than in drier upland areas.

As a disclaimer, I would like to state that I am in no way qualified to promote chaga as a solution to any problem, or to define or quantify its medicinal properties. I am also not qualified (very few people are, if any) to prescribe, give advice about dosage, or in any way give you the impression that I know what is safe and what is not. If you think I’m being overly cautious, I’m not. Compounds like those found in mushrooms have demonstrated effects on the human body. If you are in any way infirm, or have ongoing health conditions, you really should not mess around with the kind of powerful chemicals contained in an “herbal” like chaga. There is no knowing or controlling what quantity of “medicine” you are consuming, nor do we yet fully understand what we’re dealing with. What’s more, there’s almost no way to know what will interact with any of your existing medications. With some mushrooms we are getting a clearer picture, but this whole arena is still like the Wild West of medicine.

Having stated all that, chaga does appear to have properties that are worthwhile. It has been known literally for hundreds of years to have positive effects on our health; most notably, it has been known as an anti-cancer/tumor-reducing agent. In his 2015 book “Edible and Medicinal Mushrooms,” Jim Meuninck states that chaga is “considered one of the highest sources of antioxidants.” He adds that “it has anticancer…and anti-inflammatory properties and currently is being studied for use as a chemotherapeutic agent.” Indeed, a quick internet search will yield many studies that would hold up those claims. A 2016 study posted on the National Center for Biotechnology Information’s website details the positive effects observed in lung carcinoma cases in mice, stating that “the I. obliquus extract could be used as a natural remedy for cancer suppression by promoting energy metabolism.” But this, of course, is a long way from using chaga routinely in human cancer treatment.

The most common use for this fungus, since it is considered medicinal, is making a tea. Similarly, a tincture can also be created, but with much more effort and time. My experience has been confined to making tea, so I will outline my own procedures. 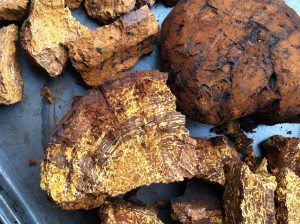 I start by drying the chaga I’ve harvested as fast as possible. It can hold a lot of moisture and will mold quickly if given the chance. Therefore, I would not advise collecting it unless you can start drying it immediately. The canker broken off the tree can usually be broken up by hand. But I like to reduce it to 1- or 2-inch-square chunks, and that often requires using tools like a hatchet (put it in the bottom of a cardboard box while you break it up, to confine the inevitable mess). Once broken up, a food dehydrator is useful in drying chaga chunks hastily, but isn’t absolutely necessary. A person could lay them out in a well-ventilated place, like where a heating vent will blow across them. It would be a good idea to put them on paper or cardboard, which will help pull the moisture out. Remember: drying too slowly will allow mold to grow. If it does get moldy, throw it out.

When I want to make some tea, I will sometimes break the chunks up further with an inexpensive coffee bean grinder, then put the chunks and powder into a simple metal tea infuser. This infuser is then put into a small stainless pot with a few cups of cold water (sometimes I don’t bother grinding the chaga, but I think it brews faster that way). Next, I bring it to a simmer, and watch for the liquid to turn richly brown. When it reaches the concentration desired (perhaps after an hour or more), it is strained through an ordinary paper coffee filter. Done! I drink a little while it’s still warm, and in the coming days I keep it in the fridge, and drink small amounts either warm or cold.

Variation: When I have the right things on hand, I like to add a little flavor. Fortunately, in the winter we usually have oranges and/or other fruits on hand, and the peel of one orange, lemon, or tangerine added to the water will give the tea a subtle citrus hint (I’ve also been known to add a stick of cinnamon and some cloves). To help it along, I always give the pieces of peel a squeeze to help release their juices. 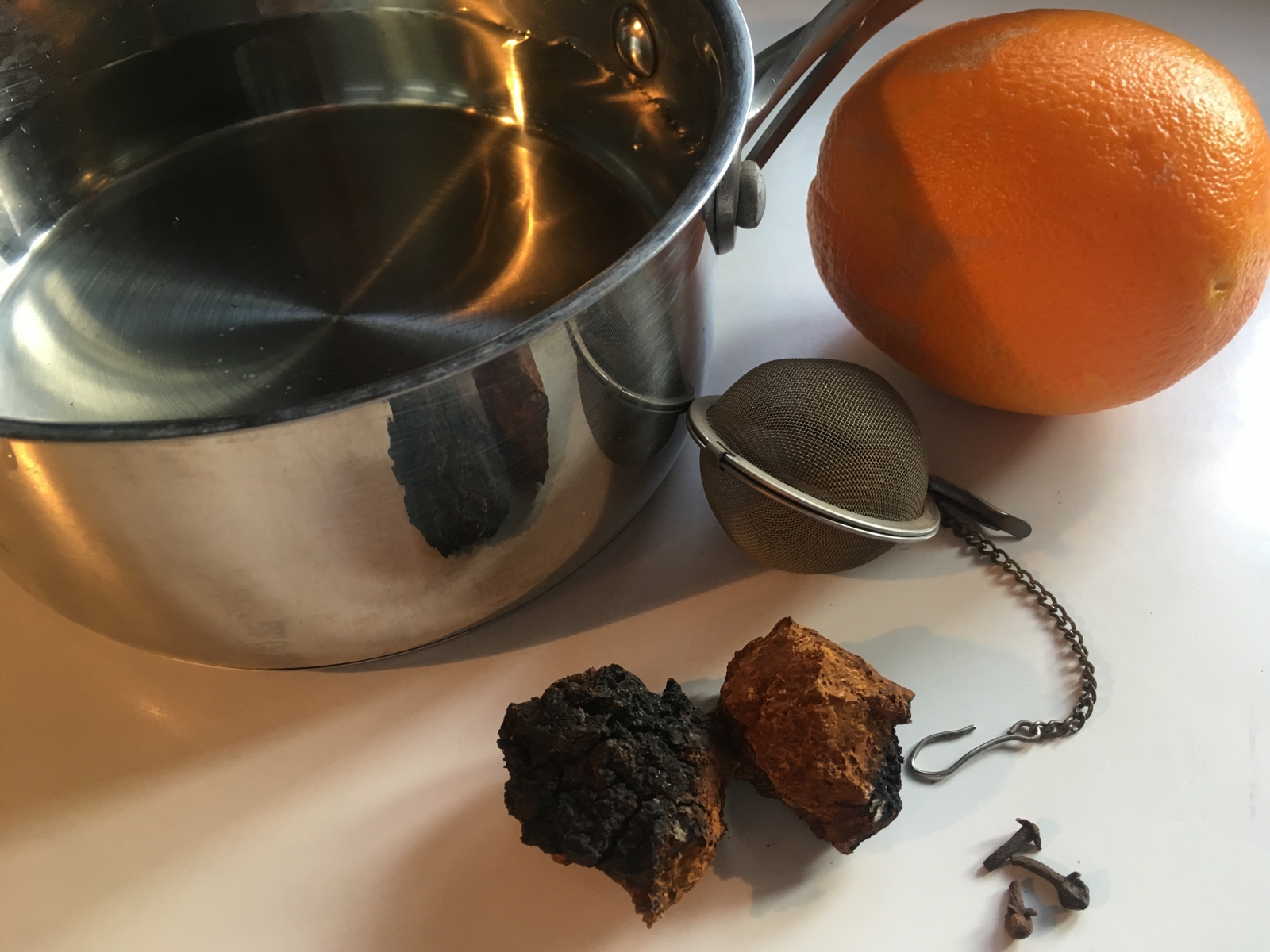 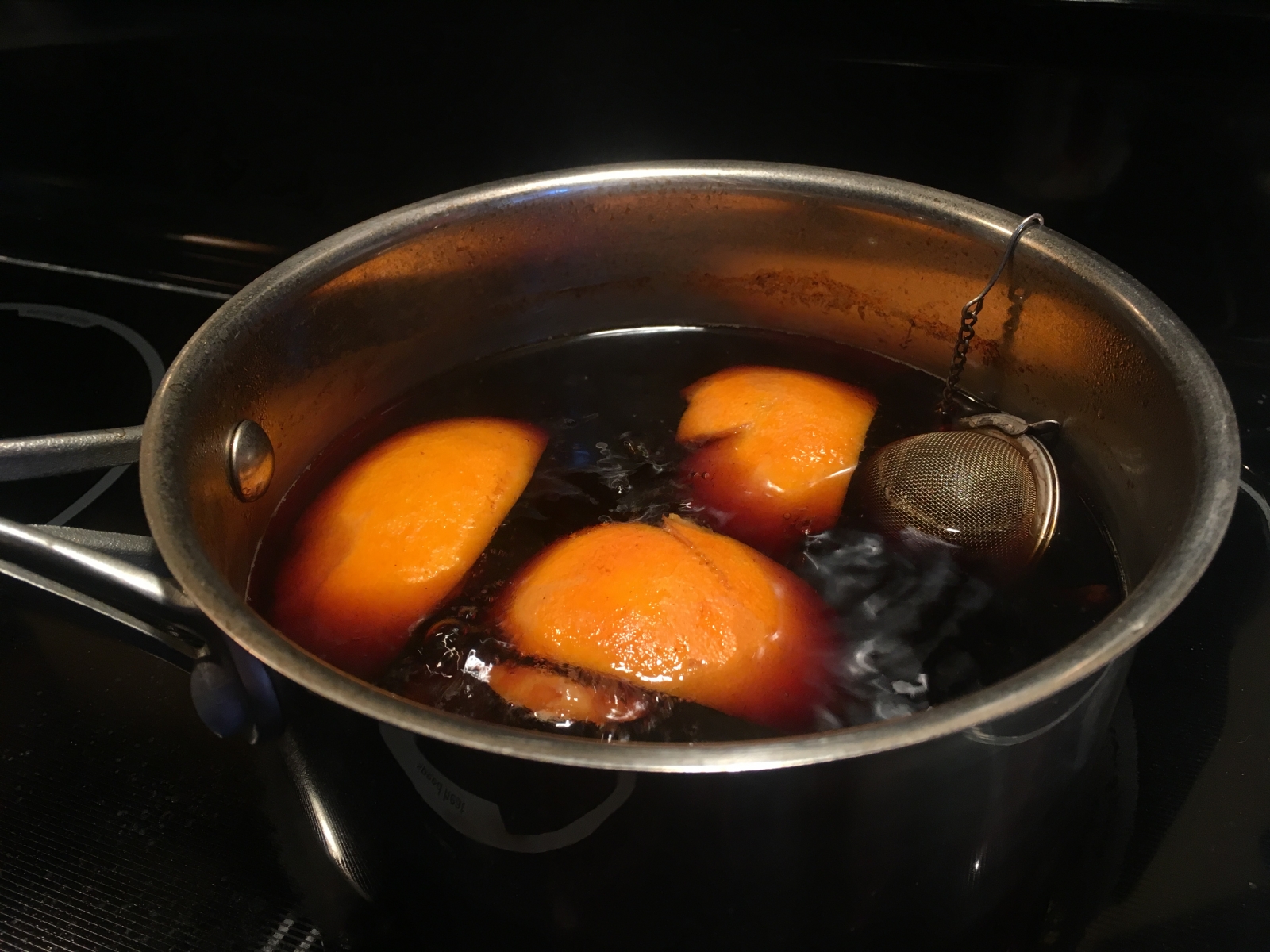 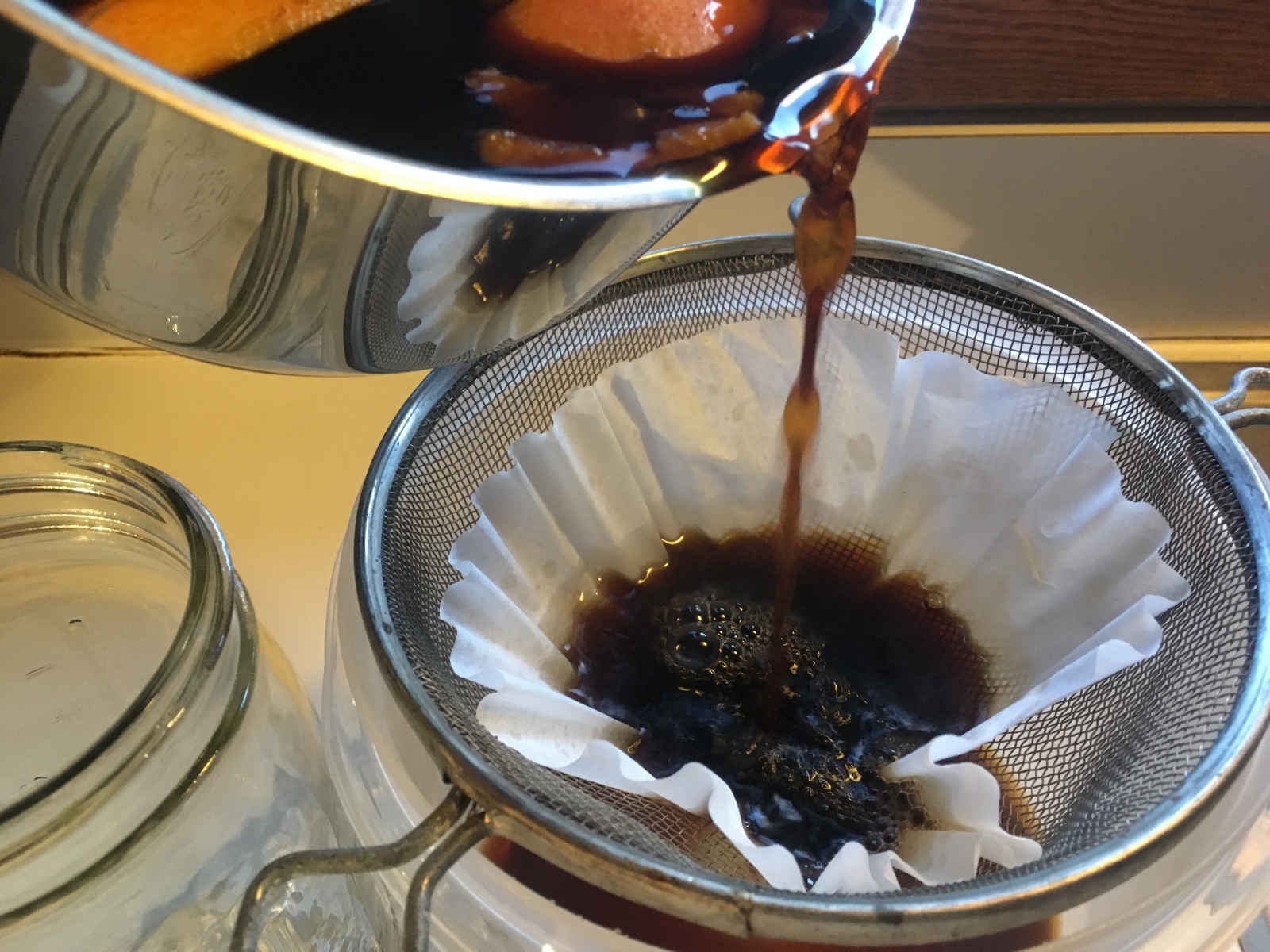 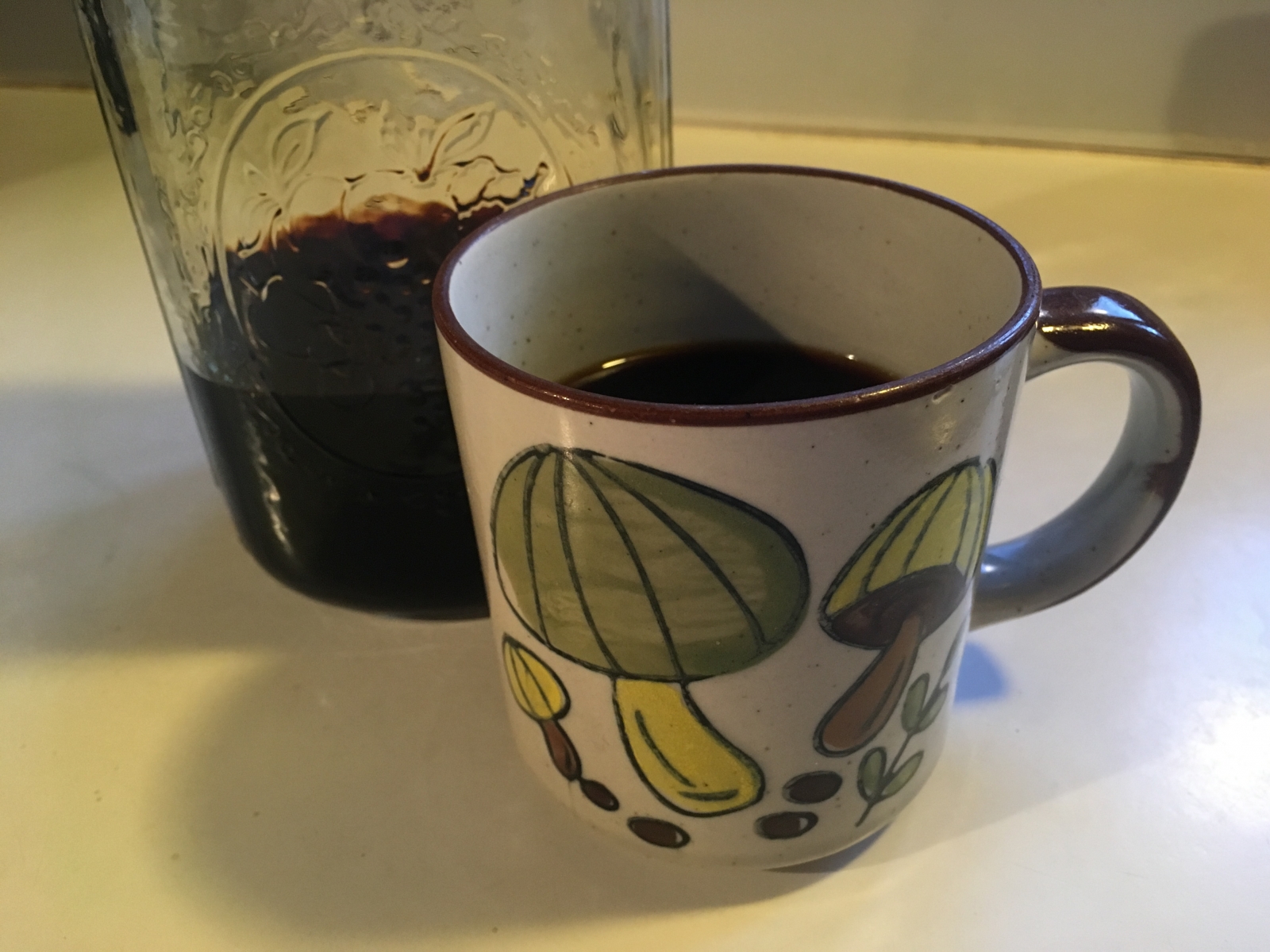