Easy victories, camaraderie in the outdoors, a warm place to lay my head at night. These are all things I like as much as the next guy. When I pried myself out of bed last Thursday morning, however, I knew none of these things awaited me on Lake Mille Lacs. The lack of all three things, however, pointed toward a high probability of good fishing, which was more than I could resist.

The latest buzz hinted that the west side of the main lake was just becoming accessible, and some folks had gotten out to the mud flats on ATVs and snowmobiles and found great fishing. The ice wasn’t reliably thick yet, it was said to be wet around cracks, and roads and bridges had not yet been extended past the bays. I don’t have a snowmobile or ATV, and I have no interest in being that guy who ends up needing a towing hookup at the bottom of the lake. My plan, if you could call it that, was to drive to the lake and see if it looked reasonable to walk out to the nearest mud flat. If it seemed foolhardy, I knew there was some fishing activity happening near some resorts, which I could fall back on. What I found when I arrived exceeded expectations; there was a well-worn road coming off the public access already, which immediately split off in three directions. I quickly packed up and started hightailing it for my destination, some 2 miles distant. 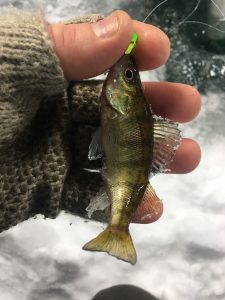 The middle road arced conveniently in the direction of the mud flat I was targeting, where I could already see a handful of wheelhouses set up. It took most of an hour to get there. Fortunately, my first choice destination was plenty far from the road and any other houses. Sitting over 36 feet of water at the bottom of the break, I settled into my pop-up shelter to re-regulate my temperature and see what might be biting down below.

In the first hour or so, I nabbed several little perch, all in the 4-5 inch range. Then starting at 10:45, in the span of 25 minutes, I caught three walleyes: 19, 15, and 11 inches in length. This felt like a good start, but I was really hoping for some tullibees, which hadn’t yet shown up. At 11:50, some strong signals appeared at only about 10 feet down (26 feet off the bottom). I reeled up as fast as I could, and was rewarded with a bite from a 15+ inch tullibee.

When things had cooled down in the early afternoon, I packed up my sled for some roaming on the adjacent mud basin. The plan was to track down some more of those marauding packs of tullibees, but all I turned up were more tiny perch and a 10-inch walleye.

The evening bite was a bit slower, with no more fish being pulled through the ice. There was one that was lost on the bottom of the hole, and some more that didn’t stay hooked even that long. I set my tip-up in the one hole I had inside my shelter, put up my cot, rolled out my sleeping bag, and called it a night.

The temperature got down to about 10 degrees, but that was not a problem; I had been eager to try my new -15 degree bag and liner. The only problem that arose was keeping a good seal around my neck/shoulder region so icy drafts did not wake me from an otherwise good sleep. I did wake several times, but this was mainly because my legs and hips struggled to find comfort on a fairly narrow sleeping pad. When I could tell the sun was coming, I got up and moved my tip-up to a new hole outside.

The morning bite was very good. The small perch came back, as did the walleyes. In a turn of events, my tip-up provided a fair amount of action. On it, I managed to pull up an 18-inch and then a 19-inch walleye when they tried to take my small sucker minnows. There were also a few false alarms, of course, but I’m always glad to get some action on my tip-up.

In an attempt to determine what was swimming around down there (and hopefully snag more tullibees), I alternated between my Northland buckshot spoon and a recently-purchased, gold-colored tungsten jig. When a large red mark appeared several feet off the bottom, I thought the tullibees might be back. Down went the tungsten jig with a couple waxworms attached. The fish showed interest, seemed to swim away, then came roaring back before it bit. Already thinking it was a tullibee, its weight and sheer strength made me think I had hooked a very large individual of the Coregonus artedi tribe. Sick of catching so many un-keepable walleyes, I actually said out loud, “this better not be another stupid walleye!” When I could see it was in fact it was Stizostedion vitreum, and a fairly large one at that, I changed my tune. Once topside, that walleye measured 22 and 1/4 inches, firmly and comfortably within the “slot,” and eligible for harvest. I elected to take it into possession, and immediately began packing up camp. 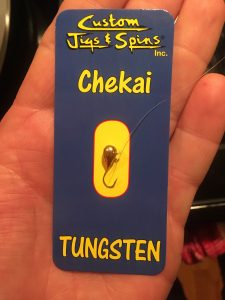 Another couple hours were spent roaming the mud basin, turning up only more small perch. Their size and behavior were incredibly similar all over this area, which became somewhat frustrating. By noon Friday, there were getting to be lots of trucks out on the lake, along with voices and dogs barking and auger noise. I was ready to leave when it got loud. On the long haul, I drilled holes a few times to fish while I cooled off. One hole in about 34 feet was particularly active, giving up still more perch and one more tullibee. I always like a bonus fish. My two tullibees will be tasty, as soon as I put them through the smoker. 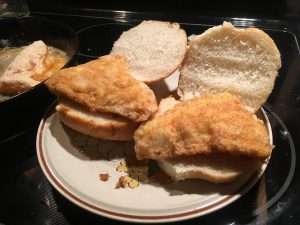 In all, it was an extremely satisfying outing. I accomplished several objectives, including giving my new sleeping bag a proper trial, exploring somewhere new on the lake, and bringing home something to eat. The unexpected star was that new tungsten jig, which was responsible for most of the fish caught, including the largest walleye. Not having fished Mille Lacs many times, it should come as no surprise that I have never before been able to harvest any walleye there; the ongoing practice of restrictive limits and narrow slots see to that. But my family greatly enjoyed eating that fish the next night, which we will not soon forget.