When I was growing up in the ’80s, the smelt boom on Lake Superior was already over and fading into collective memory, becoming legend. “Smelting” in its heyday was something everybody knew about and a great many rushed to the rivers to partake in. Nowadays, it’s almost exclusively a “used to” activity; you might have heard it too: “we used to go up there and fill up a barrel with smelt in half an hour.” In recent years, however, I’ve learned that the smelt still run and a select few still pursue them. 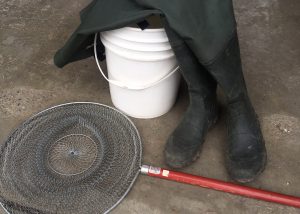 Last Wednesday, I bought a smelting net from a guy on Craig’s List for 10 bucks. The next day I headed for Lake Superior with that net, hip waders, a 5 gallon bucket, what little information could be gleaned from the internet regarding current conditions, and a whole lot of hope. The plan was to start up the shore after sunset, and work my way down if I found nothing. The first stop was the booming metropolis of Knife River.

Groping in the Dark

The steelhead fishermen were finishing up as I arrived; as my car passed over the bridge, several of them could be seen standing in or near the river. My heart skipped, as I thought they could be smelters getting set up. Each left in turn and pretty soon I was the only one with a smelt net within miles. Perhaps this should have been a sign. This did not deter me, however, because I knew full well the smelt run was in its infant stage and at best I was in the vanguard of the netting assault (at worst I’d get as many smelt as if I’d stayed home). After almost an hour and a half of struggling to maintain resolute footing in the butterscotch-colored deluge, my total catch was a white sucker, some kind of stickleback, and what appeared to be a small shiner- all under three inches in length. It was time to move on.

I hoped to find a waterway between there and Duluth to check for the transient horde. Some are closed to smelting, and all the rest seemed a bit short on water flow to be a plausible alternative to the Lester River, a known popular smelting spot. So a little before 10:30 I rolled up to the Lester and began unpacking my gear again. Two men from St. Paul were throwing their things in their trunk. They said they’d caught nothing. Another guy willingly showed me his two smelt, about 8 and 9 inches long. They looked good-sized to me, and he agreed, explaining how it is typical to catch the smaller smelt (more like 3 inches) at the beginning of the run. He said he was happy to have caught one for himself and one for his wife, and I said I’d be happy to do even that well.

There were at that time about seven or eight other people in or near the river when I ambled down and waited for my eyes to readjust to the dark. The current was swift, but the depth was much more manageable than up at the Knife. The noise made by the water as it licked and tumbled over the rocks seemed near-deafening at first. I began to sweep my net downstream, clacking the hoop over the rocky bottom. As I did, I kept a keen eye on other netters, both to see whether they picked any fish from their nets and to examine their technique. It seemed my own technique was sound, so I sustained my tedious routine while slowly plodding around in the river delta: plunge, sweep, lift, repeat.

The night was completely clear and the stars shone brilliantly. The inky sky transitioned seamlessly into the great ungraspable lake. It was irresistibly unique and beautiful…almost. If I had been doing just about anything else, I would have loved to marvel at the sky while at my work. I reluctantly put it out of my mind because I could not afford to lose my balance in the least; a great many have perished by getting swept out into the lake. Equilibrium was difficult enough to maintain with the water pushing on my legs in fits and starts, so I kept my visual focus on things more or less at eye level.

Nobody seemed to be catching much, if anything. A couple times somebody would reach into his net, but it was usually to take out a rock or some unidentifiable detritus. After a while, most of them had retreated to the bank to rest or leave entirely. I eventually did the same, and a spectator from West St. Paul chatted me up. I got an earful about the glory days of smelting. We decided to cross over the bridge and see what it was like on the north side of the river.

The other side was completely different due to the contour of the bank and the trajectory of the river’s flow. There was a much more gradual entry, with a large area of slower-flowing water between the bank and the rocky rapids. Having rested, I attacked that new territory with a renewed enthusiasm. I could, however, feel a soreness creeping into the muscles of every part of my torso. 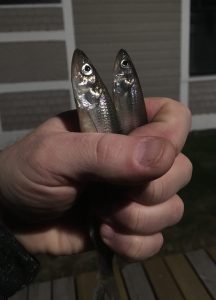 As I lifted my net on what felt like the eleven-thousandth repetition, a silvery torpedo of a fish flapped wildly in the bottom of the metal mesh. It was 12:25. I sloshed my way to the bank to toss my prize- a smelt of 6 and a half inches- into what then seemed to be a ridiculously oversized bucket. As I turned to wade back into the all-encompassing darkness, I found myself stumbling childishly over the rocks. It then dawned on me that I felt only a sliver of triumph in the wake of my catch. Fatigue and the late hour had begun to overtake me; there wasn’t much time left.

It was only about 15 minutes more until another, slightly shorter smelt graced the bottom of my net. It too found its final resting place in the white plastic tomb. I made a few more mechanical sweeps with my net, but knew it was over for me. I stuck it out until 1:00 and headed back over the bridge.

Smelt have a reputation for being great table fare, especially when eaten fresh. This should come as no surprise, considering the intense fan base that exists for these invasive little buggers. It seems frying one’s smelt is almost obligatory, so that’s what happened to mine. The next night, I whipped up a basic beer batter, dipped them, and tossed them into a generous portion of hot oil. I can now attest that their flavor is mild and pleasant. Simply beheaded and gutted, they fried quickly and their delicate fins were nearly indiscernible from the breading. I can also now see why smelt fry events are so popular and how a person can tear through a great number of them in one sitting.

Cost of This Activity:

Equipment required for smelt netting is minimal, especially considering most people interested in trying this probably already have waders of some kind and something to haul fish in. There is no special license required in Minnesota beyond a basic fishing license, but a person should find and understand the rules regarding smelt harvesting. Besides dip netting, smelt can also be harvested using a seine; a different net and location are required, as well as a netting partner. Seines and dip nets can be obtained from Duluth Nets anytime, but they also pop up elsewhere, like at garage and estate sales.

With the exception of the late-hour nature of smelting, this activity is great for sharing with the whole family. Little equipment or physical effort are required, and a person wouldn’t even need to be in the water in some places to dip a net. What’s more, the atmosphere is inherently relaxed and social, especially with food and a campfire. Combining friends, family, food, and fire on a beautiful spring night will ensure a good time no matter the final fish tally, and prove once more it’s never a goose chase. 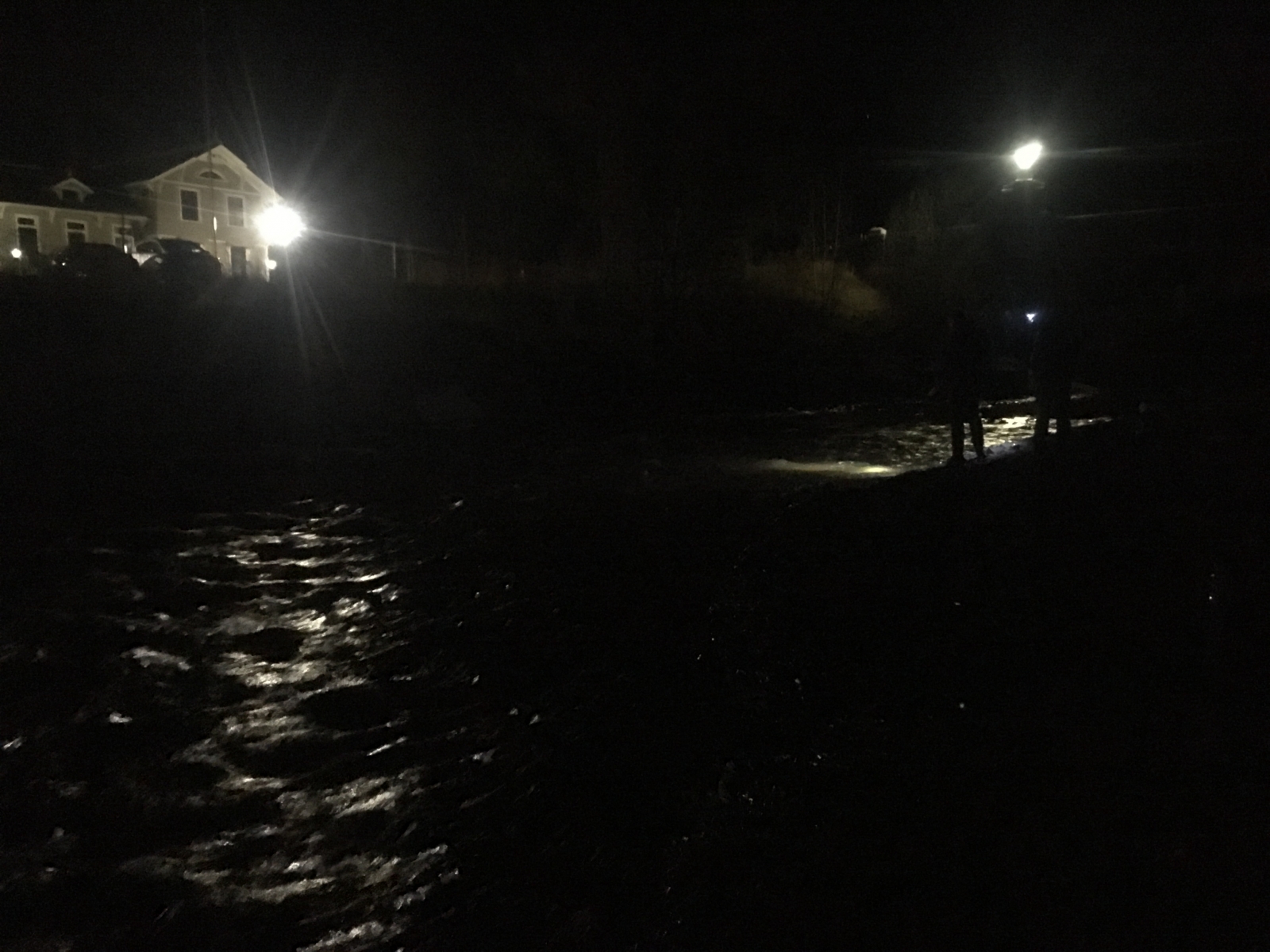 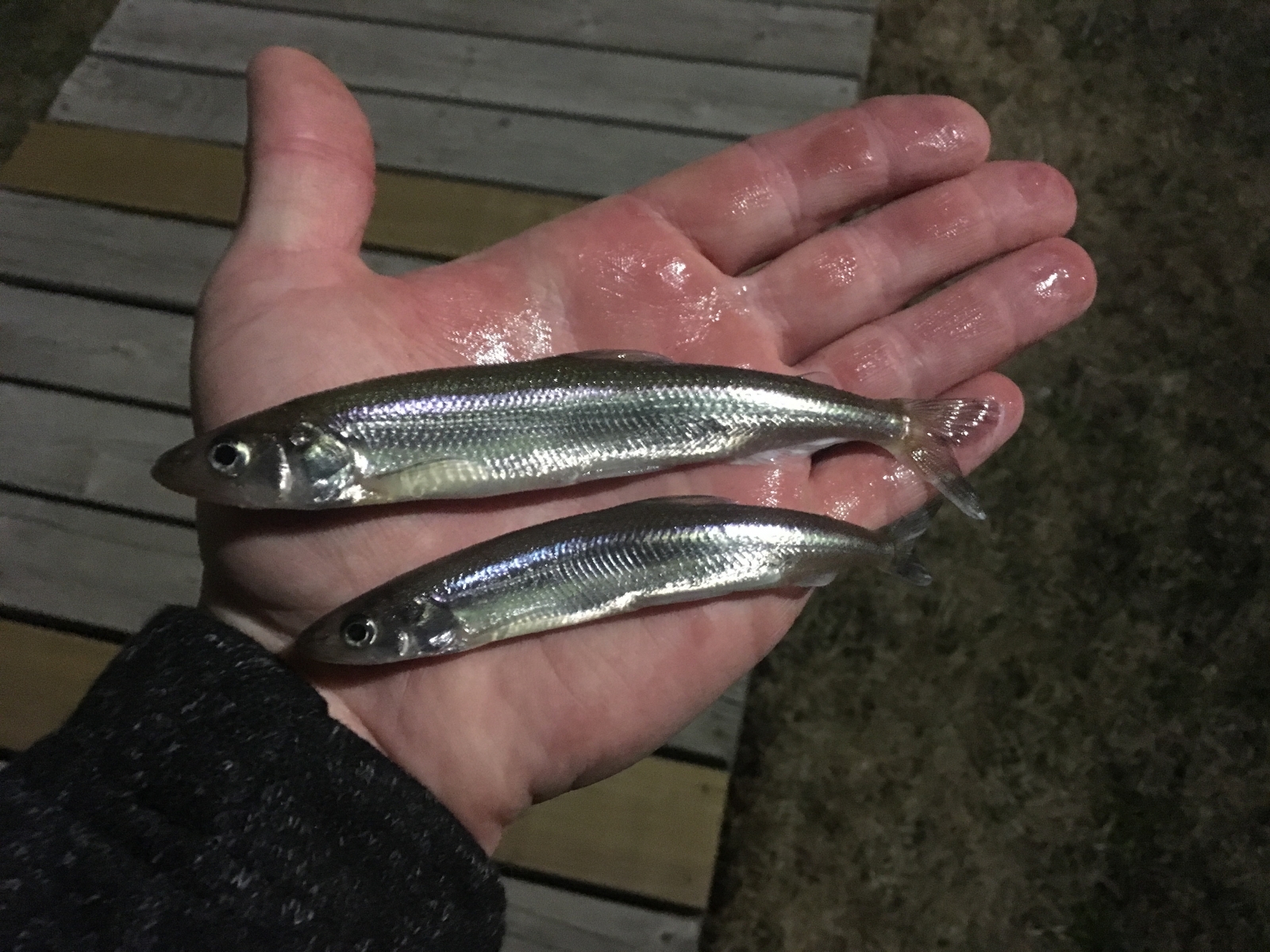 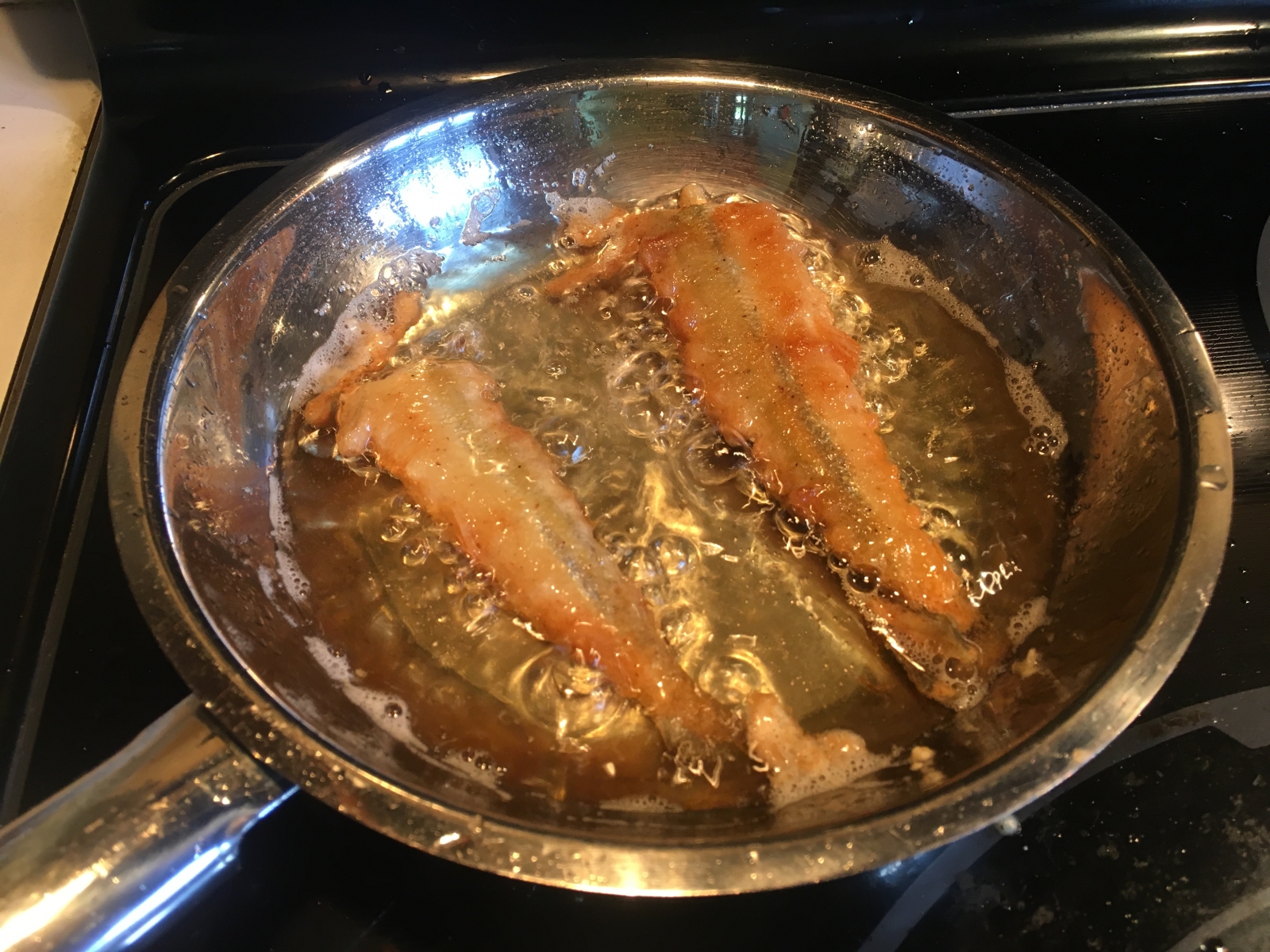 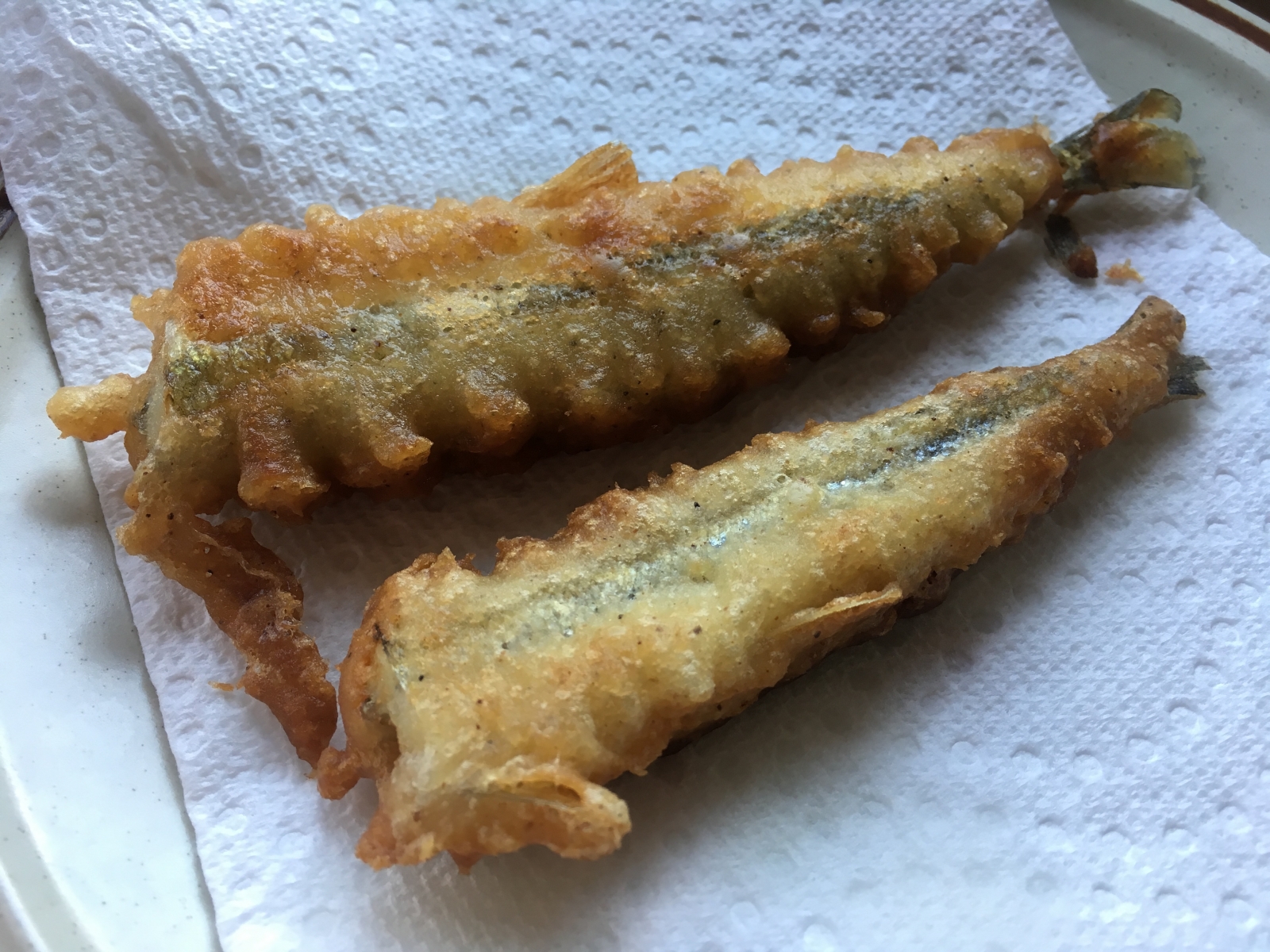