Way up north, in the far reaches of Cook County, hundreds of deep cold lakes lie hidden in the hills and shaggy conifer forests. This is the stronghold of Minnesota’s lake trout population, with dozens of lakes hosting populations of one degree or another.

There is a special place in my heart for lake trout, and an honored place on my table for any of the salmonid family. Since our trip to Crystal Lake last spring in the BWCA, I had been looking for my next opportunity to go after more of these delectable fatty fish. Also since last year, I had developed a deep burning desire to take a solo trip, which I had never done before. A permit for one person for Entry Point 44- with lake trout in Ram Lake and Little Trout Lake- seemed the perfect way to scratch both itches.

On the first portage out of the parking lot, I encountered a patch of snow on the trail; this did not surprise me much since the area received several late and heavy snowfalls, the most recent coming not much more than a week before my own arrival. A few aged footprints indicated others had gotten there first. 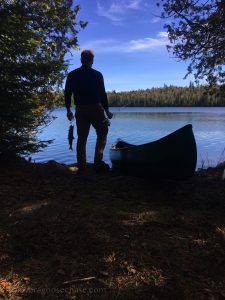 Between Ram and Kroft lakes, however, the untarnished snow drifts hinted I was the first of the season to get that far. Hints turned to proof when a deadfall over the trail required some cutting in order to pass.

Once in my chosen campsite on Little Trout Lake (the fourth lake in), I settled into the absolute and unspoiled solitude. There was not much time left for fishing, but I paddled around a bit, casting and trolling without any strikes. Nightfall found me nestled tight in my sleeping bag, in complete silence; insects were still dormant, it seemed, and the songbirds largely hadn’t migrated that far north yet.

The next morning was darn cold; intricate ice crystals had formed in the water with my leeches overnight. In order to warm myself up, some paddling seemed in order. Just a little distance down the shoreline, a 19-inch lake trout struck my chartreuse shad rap. That trout—while large for one guy to eat—made a splendid breakfast after it was roasted over a campfire. In fact, it was the most tasty and most perfectly done trout I’ve ever had. 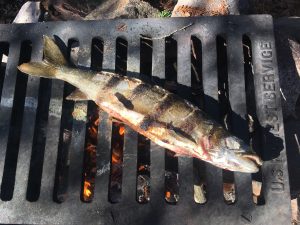 Stuffed but invigorated, I packed up camp and prepared for the long portage toward Misquah and Vista Lakes, where more lake trout and walleyes waited, respectively. Another, more massive deadfall near the beginning of the portage made me reconsider my plans. It was obvious no one had cleared the trails yet, and other roadblocks seemed inevitable. After a protracted internal debate, I reluctantly turned around, reclaimed my campsite, and prepared for much more trout fishing.

Now, one thing I learned in my preparation for this trip is that until the water reaches a certain temperature, lake trout will be anywhere and everywhere in a lake, including (and perhaps especially) in the shallows trying to nab a minnow meal. Immediately after ice-out, there was no doubt they’d still be in that mode. From what little information I could scrape up on the subject, it also seemed the trout would be shallow in the early and late hours, and deeper in the middle of the day. My experience over the course of my trip seemed to bear all of this out, more or less.

That afternoon another trout impaled itself on my lure, this time a blade bait pulled behind the canoe over deeper water. It was a smaller specimen than the first, but the prospect of catching and eating my limit of lake trout in one day was a new and irresistible milestone. This second trout was fried over another campfire. In retrospect, I wish I’d brought tin foil to bake it in with perhaps onions and/or potatoes. But since I’d anticipated frying walleye over the fire, tin foil had been exchanged for frying pan. Yes, a foil meal would have been optimal, but as they say, you “gotta dance with the girl that brought ya.”

Thoroughly satisfied, I spent the evening in the campsite. It occurred to me I could still catch even though I couldn’t keep, so in an impromptu experiment I rigged up a slip bobber and tossed one of the leeches I’d planned to offer the walleyes into about 5 feet of water. Sure enough, in the waning minutes of daylight, the bobber bobbed and I set the hook on the biggest trout of the trip: a gorgeous 21-incher. 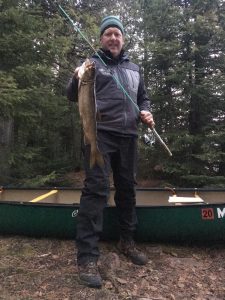 The icing on the cake was the fact that it was caught on an old Heddon fiberglass rod of Grandpa’s, on the eve of what would have been his hundred-and-third birthday. A memorable sunset capped off what I’ve come to call a “one-percent day.”

The next morning started at 5:40, same as the one before. There was no plan to awaken so early, but it was clear I was done sleeping. It’s amazing how soon my body adopts a new sleeping schedule. Anyway, I climbed sluggishly into the canoe and began casting toward the shallows with a gold shallow-running Shad Rap. It took a little while, but eventually my lure seemed a little too alluring to my next fish, a 12.5-inch laker. It was promptly released in the hope that it might still be there to greet me again in a few years.

At that point, I’d caught four trout on Little Trout, and a group of at least six other people had set up camp on the opposite end of that little lake. I was growing tired of seeing their three canoes and hearing their voices, albeit occasionally. Mentally, I had settled in for another night on Little Trout, but Ram Lake contains lake trout and also rainbow trout, which would make for a nice bonus fish. Besides, one of my goals was to take some fish home with me, so more time fishing that lake would mean a better chance for fulfilling that request from my wife and kids. I packed up camp and paddled my way off the lake with chartreuse Shad Rap in tow.

Just yards from the portage, I set my paddle down to reel the line in. At that moment my rod began to bounce, and I thought, “A moment too late; it’s already hitting the rocks.” I was proved wrong by an 18-inch lake trout. By the time I had let it go, I was about 1 canoe length from my point of departure and well within sight of those other guys on the island campsite. They were completely oblivious to my catch. It was a good way to end things there, and I may just go back before too long.

I spent the afternoon trolling, casting, jigging, and otherwise probing all points of Ram Lake. The wind and waves were the most acute up to that point of the trip, and it was exhausting work. The antidote turned out to be the campsite I chose that was on the east side of the lake and mostly sheltered from the north wind. It is perched up on a rock face that plunges into the lake, maybe 15 feet above the water, with a great view of the lake and the sunset. I thought there was a good chance of finding a trout patrolling in front of that mini palisade, so I casted different lures time and again while I set up camp and ate supper. Sure enough, a lake trout attacked my crawdad-colored Husky Jerk, and I attached it to my chain stringer. 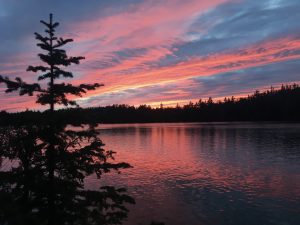 The plan was to collect some snow from the woods in a plastic shopping bag, tuck the gutted fish into that icy bed, and hoist it in the air with my food bag for the night. It happened just that way, but was delayed by an even more spectacular sunset than the night before. I didn’t mind much.

The next morning started early once again, but I was not in much of a hurry; the wind was still howling, if not worse than the day before. It seemed I better not end up on the other end of the lake, lest I should become stranded downwind. I sipped at my coffee while I did what casting could done from shore, but that wasn’t working.

I snuck my canoe around the point and fought my way to the extreme northeast corner of the lake. After some time, I had covered the less-windy portions of the shoreline and was resigned to heading back to the campsite. On my way past the point, I made a cast across it, more or less in desperation. Something hit my floating Rapala, jumped twice, and threw the hook. I ducked back into the refuge behind the point and wedged the canoe against a log so I could keep casting. It dawned on me that a jumping trout would probably be a rainbow trout, which caused me to want it more than anything in that moment. Cast after cast produced nothing. Then another strike, jump, and spit. My blood was on fire with frustration and rage. I could not stand the thought of giving up; clearly that fish was active and there to feed, and it seemed only a matter of time until I would prevail. I grabbed my other rod, adjusted the bobber stop, and sacrificed another leech in my quest to take that trout. All told, the better part of an hour was spent working all the parts of that point with no more action. And despite my sheltered location, the wind and cold were slowly having their way with me and my body began to shiver uncontrollably. I dislodged the canoe and set it slowly into motion.

In one more desperation cast, I tossed my Rapala far over the point. Something hit it with gusto and fought me every inch of the way. When I could see it was another lake trout, I could have been disappointed, but knew that second laker would fill out my limit and make a good consolation prize. I was more than happy to call it a trip and lay that fish alongside the other one in the bag of snow.

My steps were light as I carried the canoe up and over the last portage to the car. 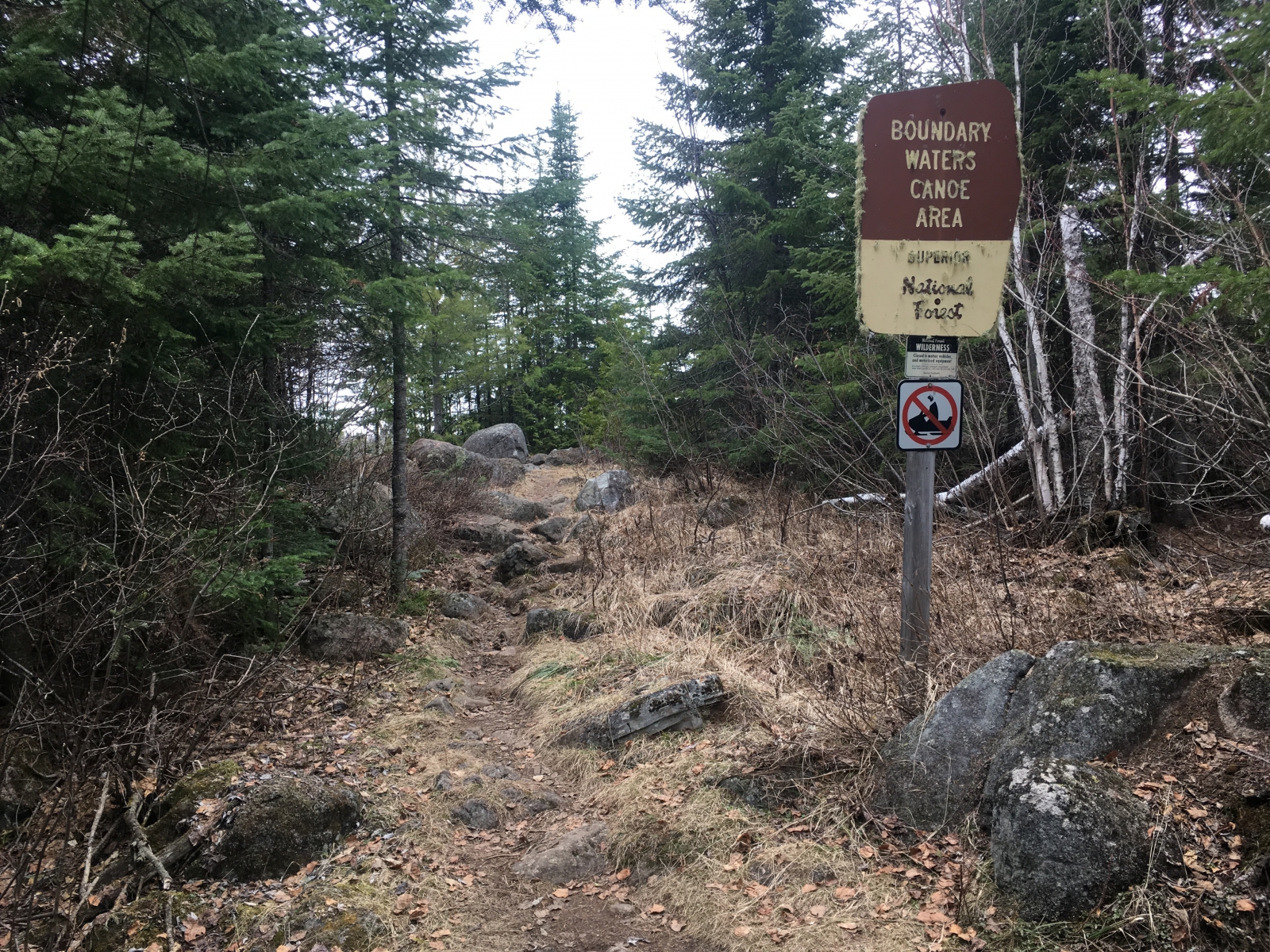 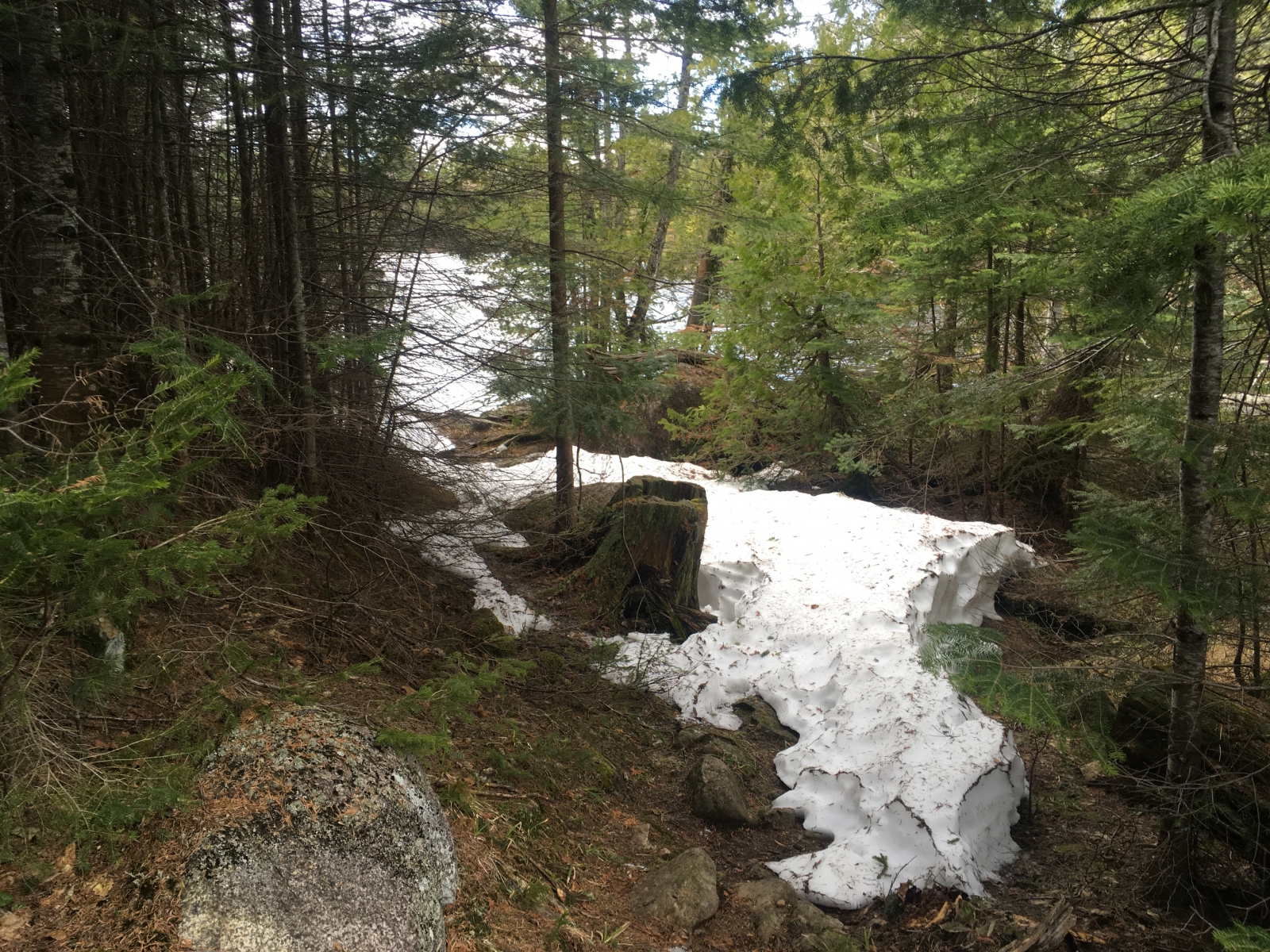 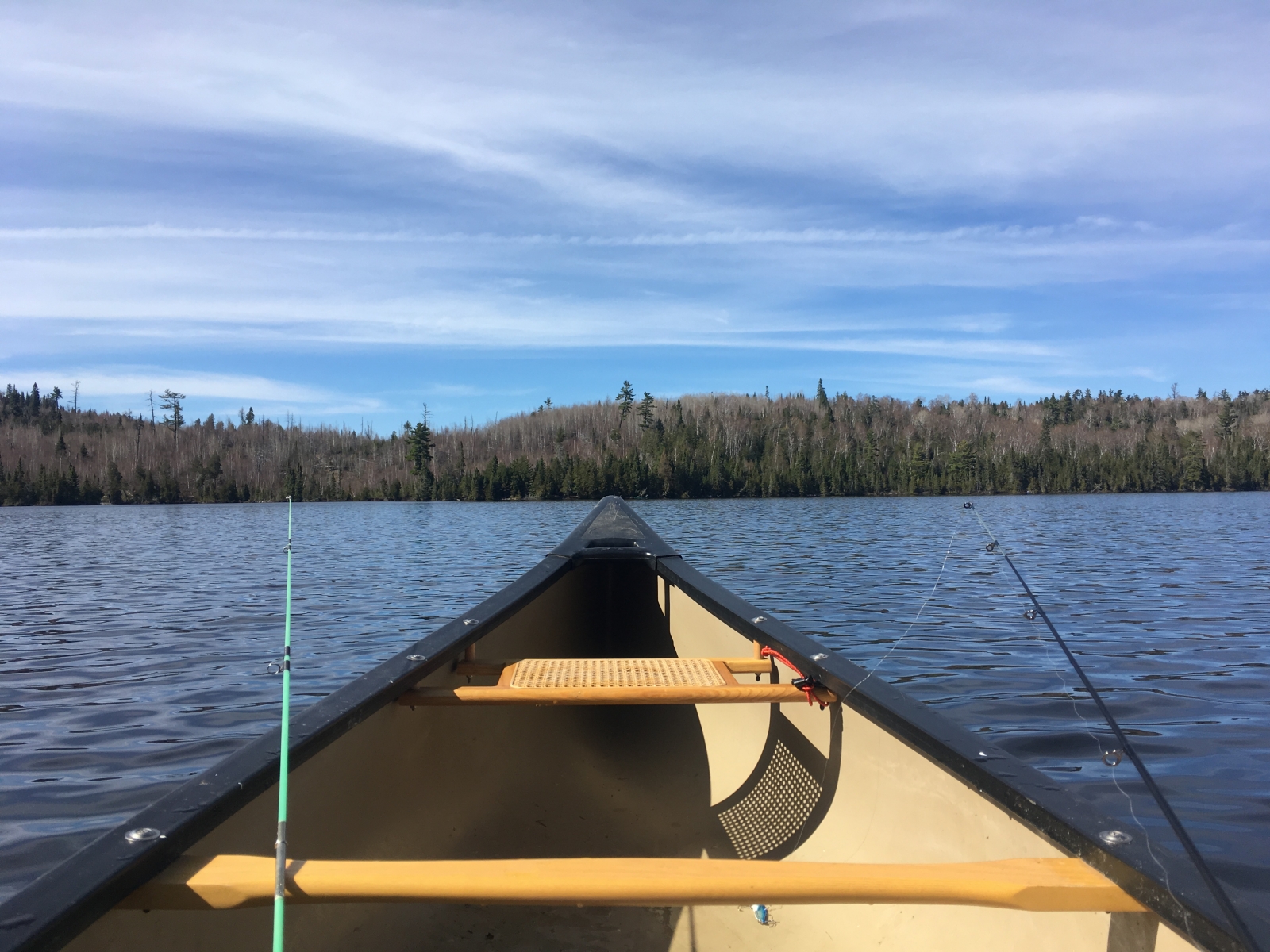 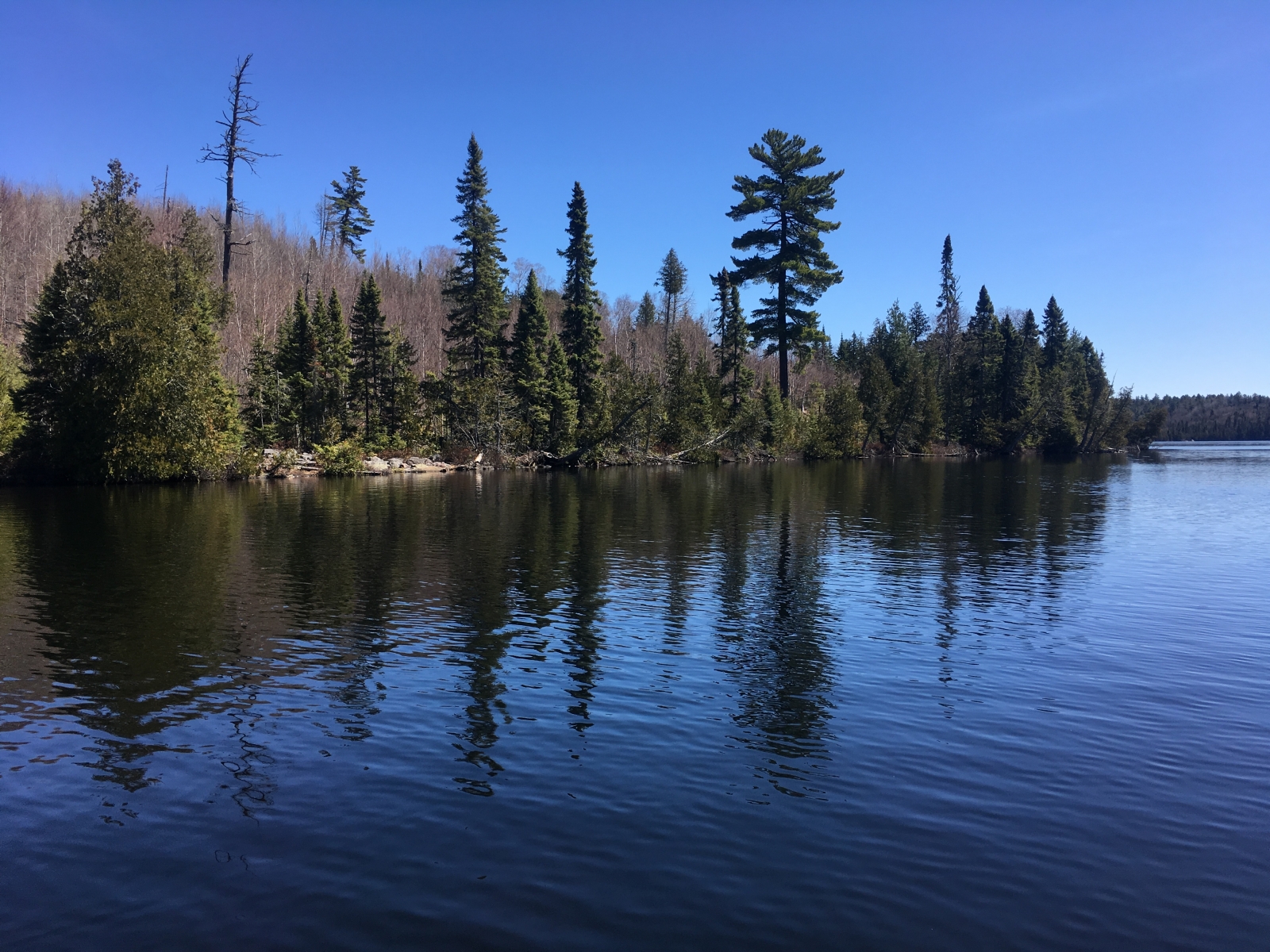 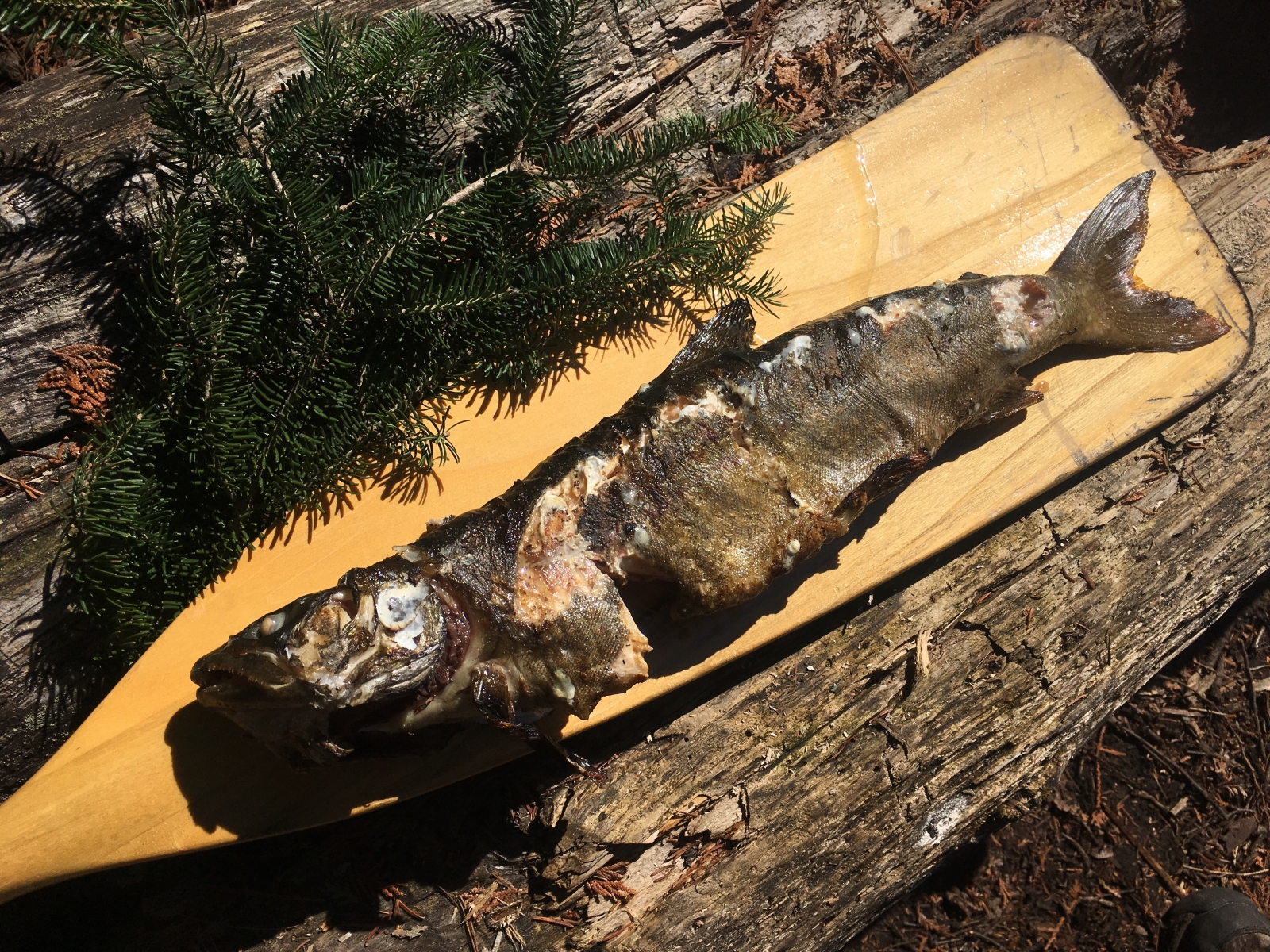 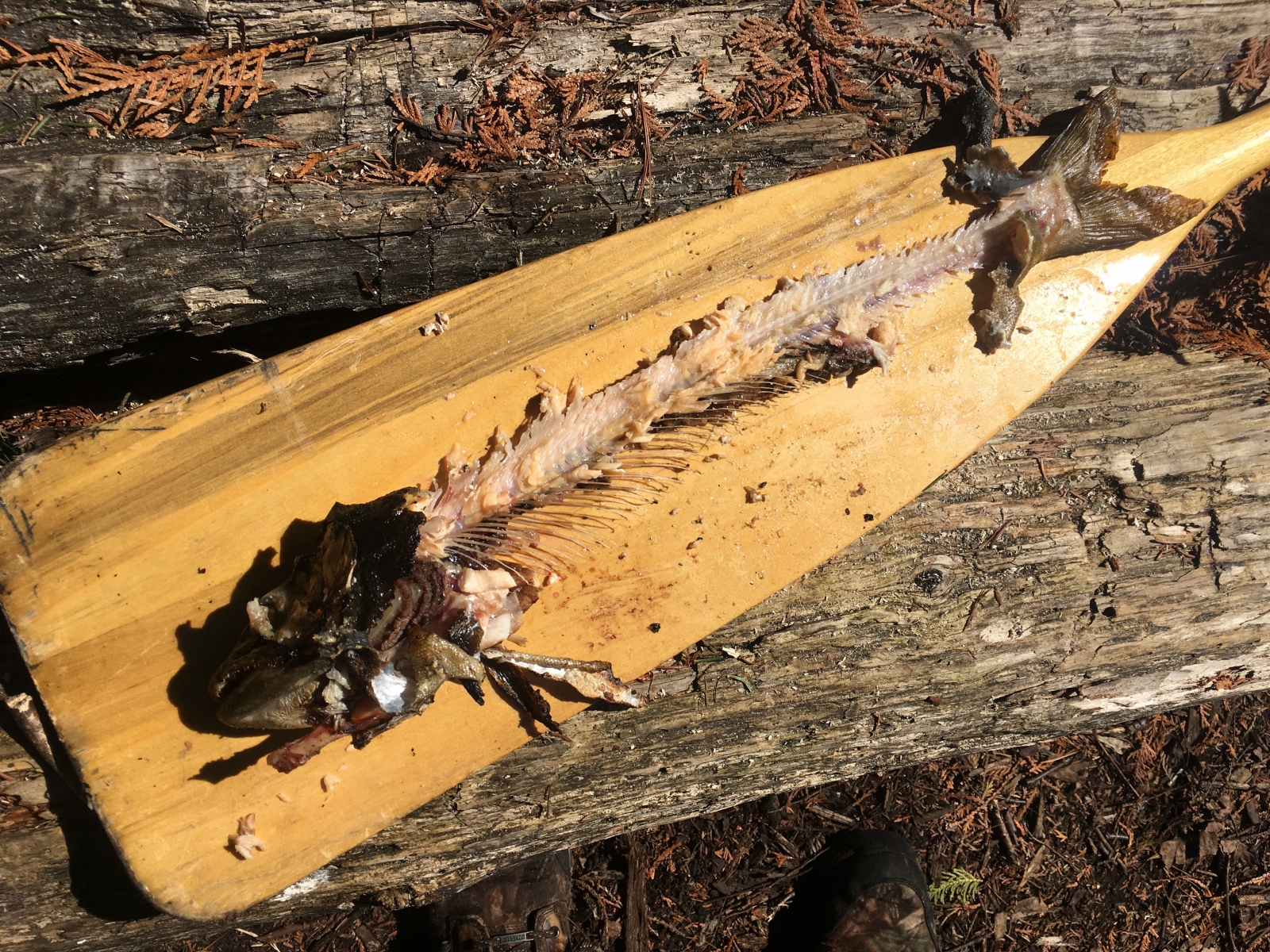 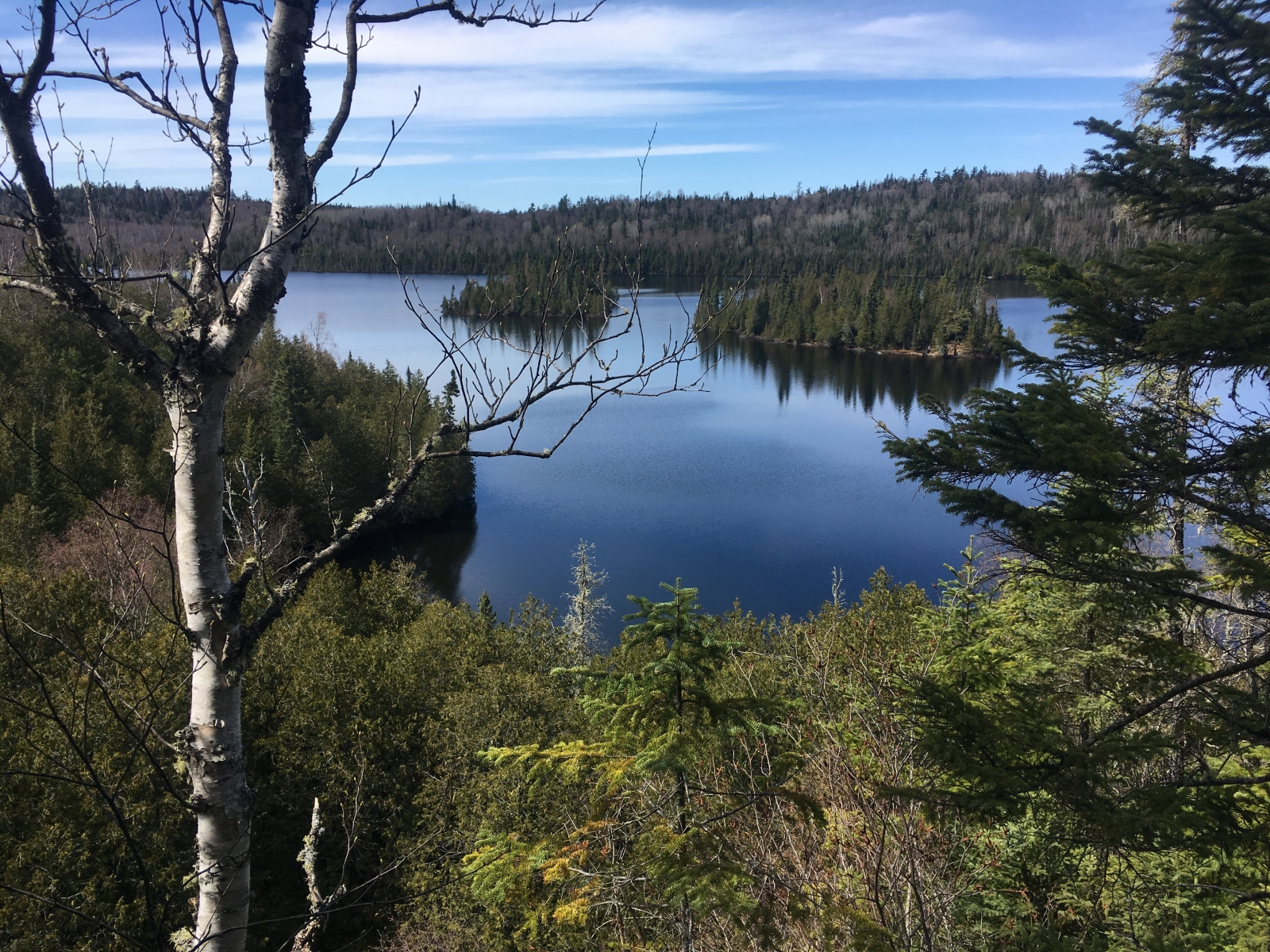 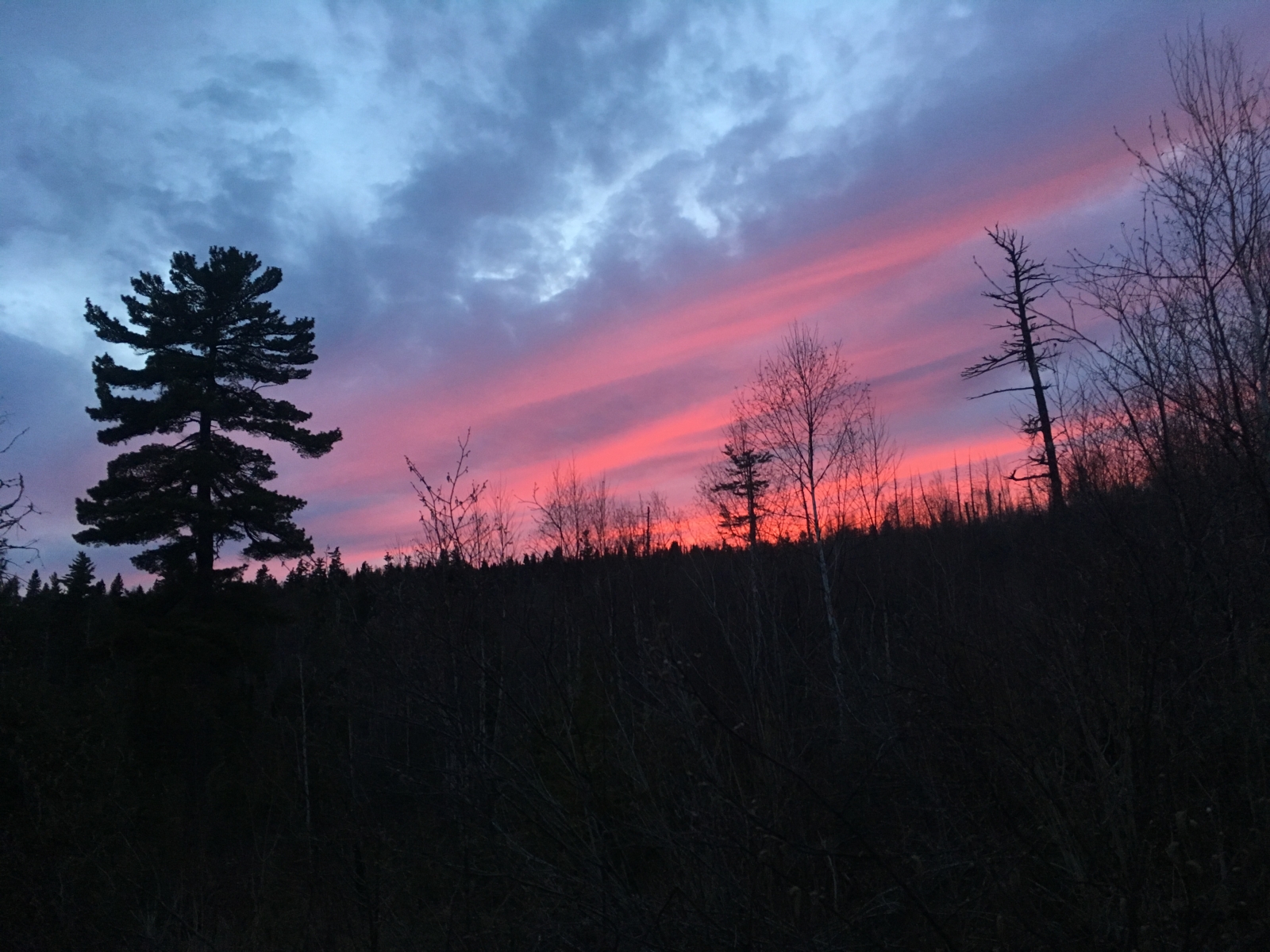 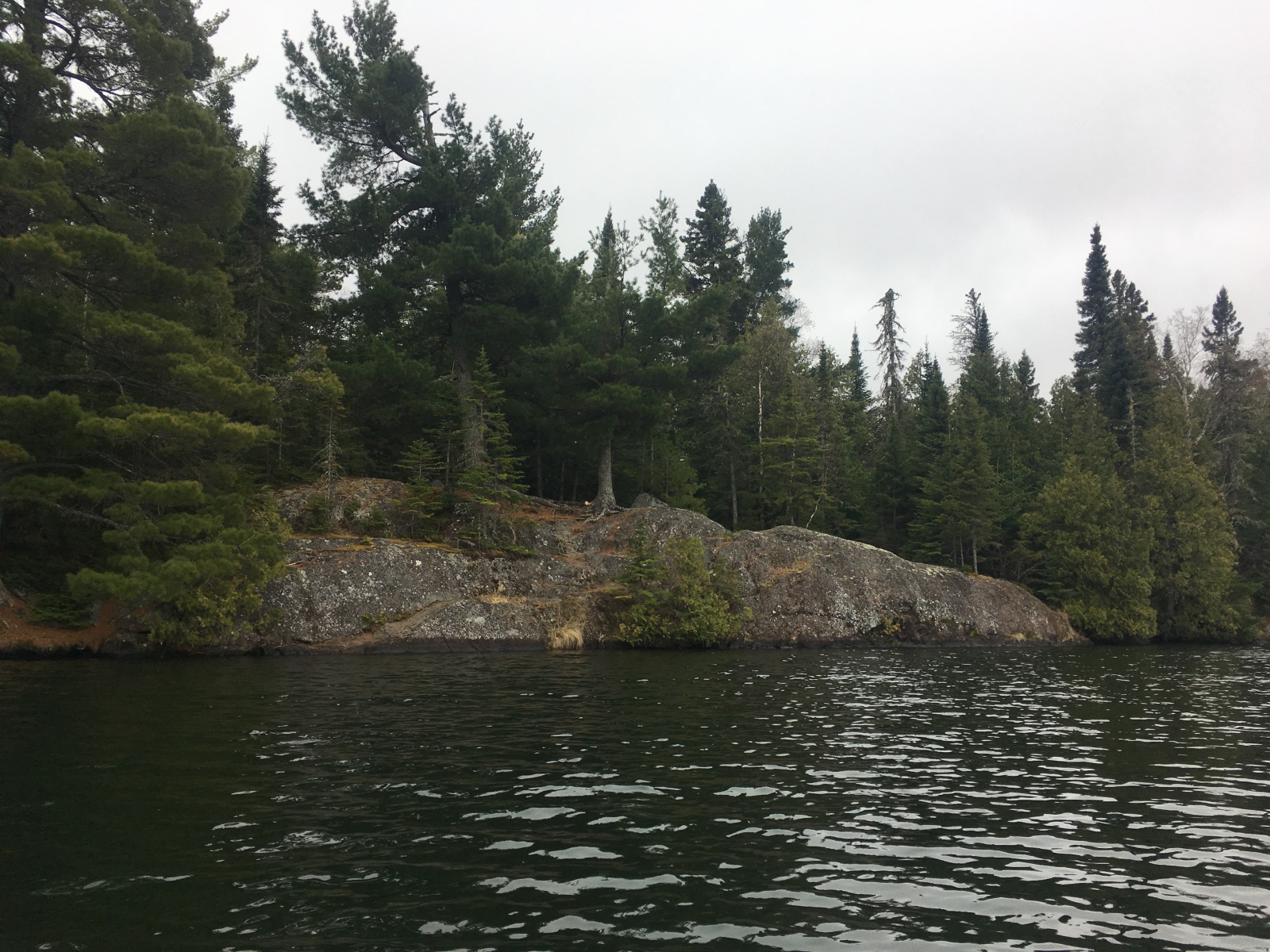 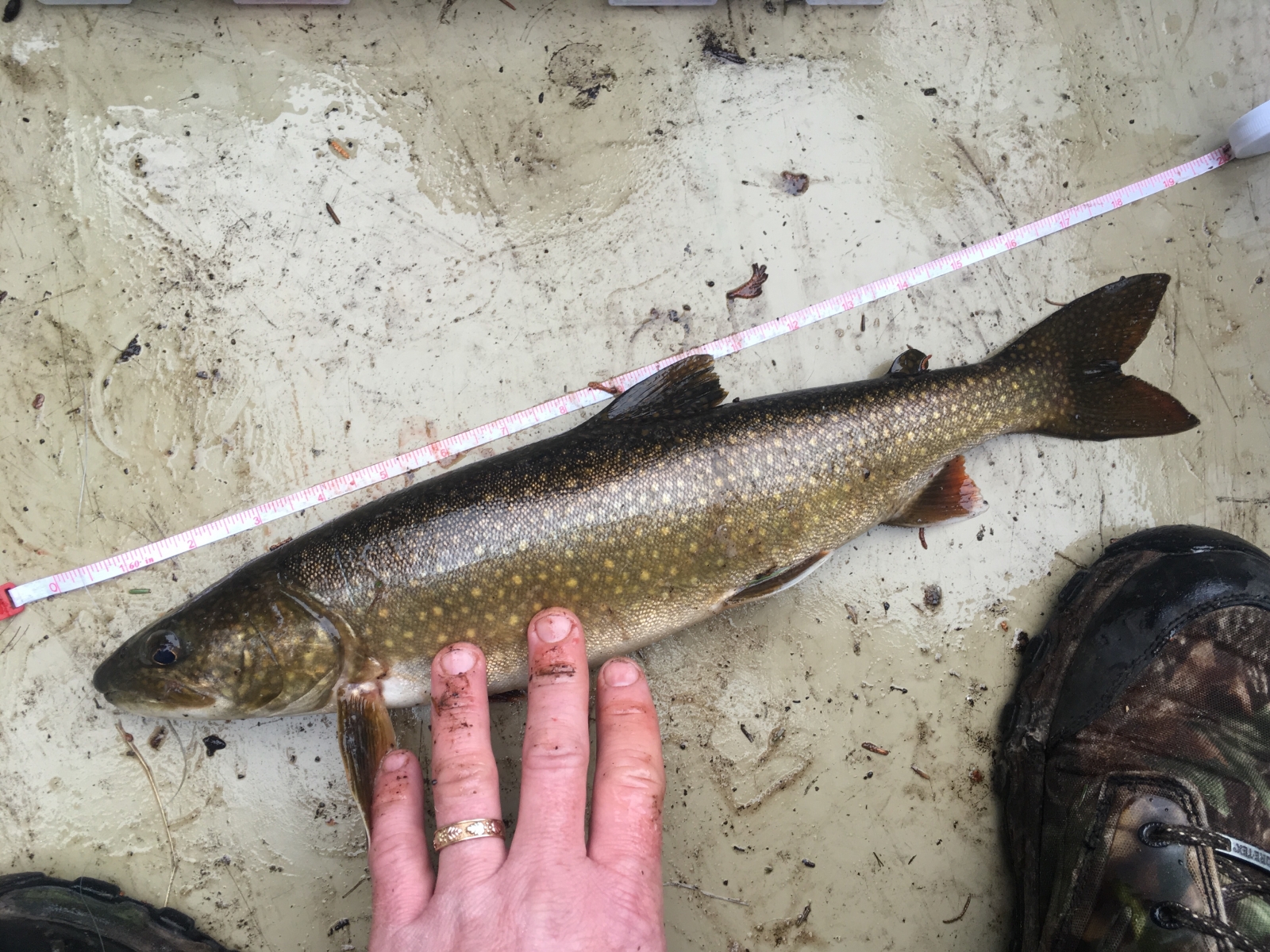 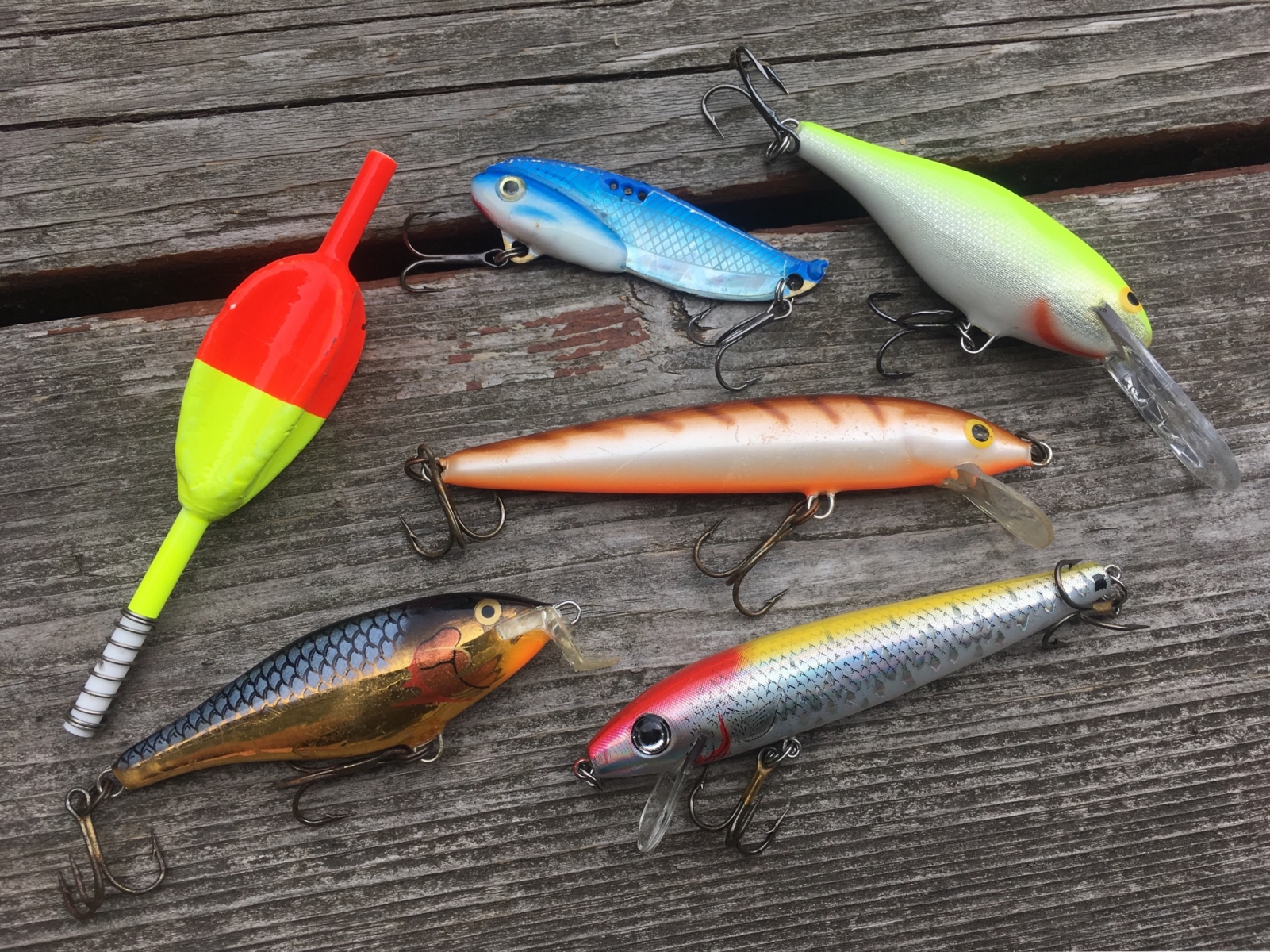 To see a video compilation of highlights from this trip, see the video “Sights & Sounds: BWCA in Spring” on the NAGC YouTube channel.