Everybody’s gotta eat. Even when they’re on the road. There are the hidden gems, and there are the inevitable sore disappointments. On my adventures, I’ve found my share of each. In the interest of rewarding the proprietors of first-rate eateries, I would like to share some of my favorites with you. Hopefully this will also serve to help you avoid some of the duds lurking out there. The map below is interactive, so click on the icons to obtain addresses, phone numbers, and websites. Have at it, and let me know what you think! 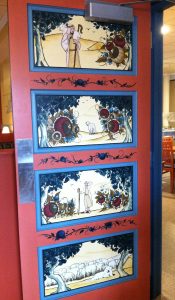 Let’s not beat around the bush. Instead, I’ll start with the crown jewel of this list: The Nordhem Restaurant and Heritage Center. The Nordhem is a tribute— no, a monument— to small town pride and local Scandinavian heritage (Nordhem is apparently Swedish for “northern home”). This family-centric business on the main drag through Karlstad is quite unlike anything else you are apt to find in any old dot on the map. From the moment you pass through the front door, you know you’ve stumbled upon something special.

Owner Sharon Wikstrom had an artistic vision for her restaurant and painted much of it. When she passed away, her son Matthew and daughter in law Andrea took up the mantle and finished the job. Now, murals above booths depict Scandinavian folk tales and doors throughout the restaurant display biblical scenes and traditional rosemaling. In all, it is spectacular.

The rest of the restaurant’s interior is painted in a color scheme identical to that of a little church in Øystese, Norway that my wife and I happened to visit in 2018. No joke- I have the pictures to prove it. You certainly can’t accuse the folks in Karlstad of inauthenticity.

When it comes to the menu, Nordhem won’t disappoint. With daily specials and pages of dishes to choose from, there is no chance of sitting in your booth thinking, “there’s nothing here I want.” A handful of offerings from Sweden and Norway also keep things interesting. I’ve eaten there a few times, including the Sunday buffet, and everything reflected the homemade, personal treatment they specialize in. You owe it to yourself to stop in (or make a special trip to) Karlstad.

On the opposite end of our map sits The Local Pizzeria. Tucked away in Zumbro Falls, this (literally) mom-and-pop operation has auspicious roots. Husband and wife team Paul and Peggy Bankers opened The Local Pizzeria in 2015. They had been living in Denver for years, and wanted to get back to Minnesota. But that doesn’t mean they’re new to the pizza business. Far from it.

Paul had a hand in the beginnings of Godfather’s Pizza in Nebraska years ago (he still has the top-secret recipes for the crust and sauce). Together with Peggy, they opened a Waldo’s Pizza in St. Cloud, where I remember eating decades ago. From St. Cloud they moved to Denver where Paul stayed active in the foodservice industry. Nowadays they serve top-notch handmade pizza to a loyal fan base. I can attest to that, as our family had both the “Pork-A-Licious” and the “Barn” for our first meal at the Local. We were camping over 20 miles away at Frontenac State Park at the time and it was more than worth the hike.

The restaurant is housed in a historic building that once serviced the stage coach business; horses used to be tied up where the main dining room is now. There are more tables in an adjacent room and patio seating outside. And an assortment of ice cream flavors awaits the diner who doesn’t actually gorge himself on the pizza (like I did).

Zumbro Falls is not far from either U.S. highways 52 or 61, and is worth a short deviation from your route. Or, Zumbro Falls is itself a worthy destination for canoeing, kayaking, river fishing, camping, or fall leaf-peeping trips. And since nobody in their right mind doesn’t like some kind of pizza, there’s practically no excuse not to drop in and experience The Local. Just keep in mind: they are usually closed Mondays and Tuesdays since there are only two employees, and if they ever want a vacation, they have to shut the place down. So you might want to call ahead to confirm the oven is hot when you want to go: 507-753-2444 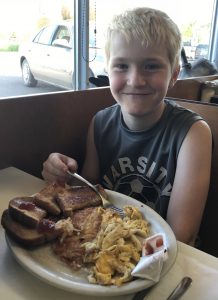 There aren’t many places you can go to find an old-fashioned diner experience anymore. This fact can be somewhat distressing to people of a certain age. But don’t despair—the Sportsmen’s Cafe in Mora has your back.

At Sportsmen’s, classic diner design and furnishings evoke former times. A long L-shaped counter with stools dominates the inside of the dining room, and booths line the walls. Full-size front windows invite passers by to stop and have a sit-down meal instead of being handed one through a window. If that’s not enough, a full menu, daily specials, and homemade pie should seal the deal. And that’s basically it. No theme or gimmicks, and no “dining experience.” Just a regular restaurant that serves good food. For what it’s worth, they seem to have a loyal group of local patrons; that’s always a good sign.

We used to drive past this place in the north end of town, wondering what it was like. One summer day when I was driving by with just my son, he requested that we finally stop and try it. How could I refuse? We each had a meal with pie, and now the Sportsmen’s Cafe is officially his favorite restaurant in all the world. At my age, it’s hard to come up with favorites. But for me, Sportsmen’s Cafe is near the top of my list too.

I know what you’re thinking: A buffet? In a mall? Seriously, Roy?! Yes. Stay with me here.

Few people claim not to like Chinese food. I definitely love it. And in my opinion, more is always better in this arena. Sure, you may not like to stuff yourself with salty, saucy goodness like I do.  But unless your diet is limited to mac & cheese and chicken strips, you can always find something you like at a buffet, right?

Our family of four usually eats here a couple times a year, and we’ve never not had a good meal. Everybody has their favorite dishes. My wife likes the sesame chicken. My kids usually quit the buffet halfway through to start making their own soft serve cones. As for me, the Mongolian beef reigns supreme. In my opinion, it is perfectly done with lots of green beans and onions, swimming in a heavenly sauce. It’s the best Mongolian beef I’ve ever had, anywhere. The only place they might make it better is in Mongolia, and maybe not even there. Plus, I know the ingredients are fresh. We see them every time as we leave, sorting and preparing the green beans on a table near the register. Mall food? No. It’s practically homemade.

This place is pretty new to me. Apparently, they’ve been in business since 2006. I don’t know how I managed to overlook it for so many years, but I’m glad my eyes have been opened.

They make some outstanding donuts, rolls, scones, danishes, and other sweet treats, and the secret’s out. It is one hopping place in the mornings. I learned the hard way that if you don’t get there on the early side, you won’t have much to choose from. In fact, if we are driving up north in the morning rather than the night before, I can convince the whole family to get up much earlier than they otherwise would by promising to stop at McGregor Baking Company. Getting what you want there can be a powerful motivator.

Last time I was there, I had a cranberry flavored danish that was so beautiful I couldn’t pass it up. It tasted as good as it looked. The time before that, we all had almond-flavored twists. Nothing has ever been short of divine, which makes me wonder: what do they put in that dough?

Overstated claims tend to lead to disappointments. World’s Best Donuts in Grand Marais has been around for 50 years, which is one reason their name might not be all smoke-and-mirrors marketing. The other reason, in my opinion, is their cake donuts.

They make a big deal about their “skizzle,” which defies classification, other than to say it’s fried dough with sugar all over it. It’s good, but there are a ton of other things to try at this tiny North Shore institution. In past years, I’ve had long johns and skizzles and all sorts of things. But this last May I picked up a skizzle to take home and a cake donut which left me feeling a bit blindsided. If I hadn’t been so far down the road when I bit into it, I would have turned around and bought a dozen more. It’s a mistake that haunts me every day and will continue to do so until I manage to get there again. It’s the best I’ve ever had, which is saying a lot.

For years, I heard my dad rave about the pie at the Rothsay Truck Stop. To hear him talk about it, you’d think he would eat their sour cream raisin pie for breakfast, lunch, and dinner. He tries to time his trips to and from North Dakota so he can eat there. Needless to say, I was skeptical the first time I ate there with him. I hate it when things don’t live up to the hype. But it did. I don’t remember which meal I ate there, but I definitely remember being glad I made the time- just for that pie.

Now, I don’t usually go out of my way for pie…and I still never have. The Rothsay Truck Stop and Cafe is mere feet off Interstate 94 in Rothsay, the prairie chicken capital of Minnesota.