Skip to content
Do Something New - Gear - Hunting - Product Review

I’ve long dreamed of hunting in the mountains, spending days climbing, glassing, and stalking. This kind of trip has always seemed quite accessible to me, except for one aspect: getting the meat out of the woods. It would be impractical to expect to drag a deer back to the truck. Foolish, really, and out of the question with an elk. So that would mean quartering and packing the animal out. This is nothing to the hunter on horseback, or even one who is accustomed to doing it.

But here in Minnesota, it is rarely done. Dragging is the norm, and ATVs are often employed. It is unusual to ever be just too far from the road. With a western hunt or two nearing on the horizon, I have felt I needed practice- a trial run. Sure, I could study the process and know what to do, but I wouldn’t want to figure it out in the dark, on the side of a mountain, with a snowstorm coming. That would be truly foolish. 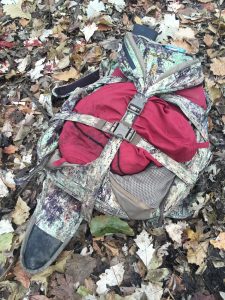 So for the last couple seasons, I’ve been looking for an opportunity to try my hand at quartering a deer and packing it out by backpack. While I spend the opening weekend of deer season hunting with family on private land, I always try to plan other hunts to satisfy the need for meat and my need for adventure. This year’s hunt in the Mississippi riverbottoms of Houston County held much promise for taking a deer far from the road.

While I found myself over three and a half miles from the road at my farthest point, I ended up taking a nice buck about a mile and a quarter out. He was far too heavy to drag on the ground, so there was no choice but to follow through with my plan. Armed with a knife and a game bag from Koola Buck, I set myself to the task.

Now, when this is normally done, a person takes the quarters, loins, tenderloins, and other assorted meat from the skeleton, and leaves behind the spine and hide and as much extraneous mass as possible. The unique problem I faced on my hunt was that part about leaving the spine behind. I was hunting in the CWD Management Zone, where leaving the spine and brain material in the zone was mandatory. Dumpsters were provided so that hunters could leave that CWD-containing waste behind, to protect the rest of the state from contamination.

At home, I researched as much as I could to determine the overall legality of doing a conventional quartering job (leaving spine, hide, etc. in the field). I didn’t come up with much. A Conservation Officer might have been a good resource, but they are very busy that time of year. I hate to pester them needlessly. I figured that since the DNR didn’t want the spines contaminating the rest of the state, they wouldn’t want spines left behind in the field to potentially contaminate the environment. It seemed I might incur adverse legal attention if I didn’t take it with me. It also seemed a ridiculous notion to separate the spine/ribcage from the meat and then carry it out anyway. So I planned to remove and pack the rear quarters, and drag the remainder of the deer. I hate to do only half a job, but my choice was more or less made for me.

I still made two trips out- one with backpack, and one more to do the dragging. The game bag I used was more than roomy enough for those rear quarters, as large as they were. The straps on the outside of the Koola Buck quarter bag (not a standard feature on meat bags) made it easy to secure to my pack. Taking that much weight from the carcass made that buck more draggable, but only barely. The dragging portion took longer than I expected, and with many stops along the way. Though my backpack had been heavy, this impressed on me how much more efficient it would have been to pack the entire animal out– even in two trips. Facing even a moderate dragging job in the future, I might elect to quarter and pack. 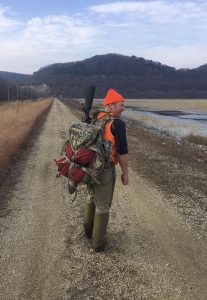 Since I wound up doing the rest of the quartering job within the next couple hours (to fulfill the CWD zone requirements), I did the whole job yet that day. What I didn’t do was the actual carrying out of the front quarters, loins, etc. Frankly, that’s not a big gap in my overall experience- it doesn’t take much to imagine dropping them into a bag. I feel now I could not only do the job again, but I could do it faster and better. That’s a load off my mind.

The next step will be to get better at using my pack, so the load can ride optimally. This was the first time I had such a heavy load in it. Again, it’s not something you want to discover in the field.

The method for splitting an animal up into quarters may seem complicated, but it’s not. If you’ve ever processed your own deer, it was probably hanging in the air as you dismantled it. Quartering in the field is essentially the same, only on the ground. If you have no previous experience with any of it, just learn about the different cuts and how to separate them from the rest of the carcass. There are many online tutorials available. 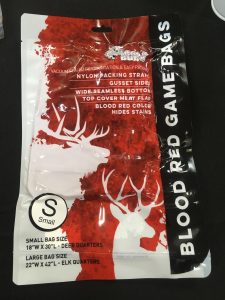 Materials for this task are encouragingly minimal. A worthy backpack is required, so choose your pack for the day carefully. A good, sharp knife is necessary to get through all the skinning, separating of joints, etc. Meat bags round out the list, and the one from Koola Buck I used was great. It is rated for elk-sized needs, and just one could accommodate an entire whitetail (not that mine was light enough). Splitting the load into at least two meat bags is customary, so be sure to obtain an appropriate number of bags for your task.

Koola Buck bags like mine come in blood red, to hide the inevitable staining. After washing at home, mine was just like new again. It also proved to be tough as nails and I expect to be able to use it for years to come. After my experience with Koola Buck, I will be looking to obtain smaller sizes for deer and antelope hunts. I highly recommend these game bags to big game hunters everywhere.

Koola Buck also makes heavy-duty and antimicrobial meat bags. You can find them all at koolabuck.com.