Skip to content
Bring a Kid - Do Something New - Public Lands

Normally I wouldn’t be thinking about our Christmas tree in October. In fact, we’ve had a hand-me-down artificial tree for about the last 15 years, so it wouldn’t occur to me at all. But some relatives were telling us they’d be at the cabin this year for Christmas, and I suggested they get a permit to take their tree from the woods for the occasion. So in the interest of encouraging others into the outdoors, I snooped around for information from Minnesota DNR and the Forest Service, and emailed them some web links.

What I found actually surprised me. As far as I could tell, the permit for harvesting a tree from Minnesota’s state forest lands would cost $25. That was a higher price than I expected. However, the permit for a tree from Chippewa National Forest costs only $5.

Honestly, this shouldn’t have surprised me; rules and permits for lands administered by the feds are usually far less restrictive for users than on Minnesota’s state forest lands. Anyway, I told my wife what I found, and it didn’t take long to come to the conclusion that we would also have a real tree this year.

The Monday before Thanksgiving, we made the trip through the woods from the family cabin to the Forest Service office in Deer River to get our permit. While I was there I also picked up a firewood permit, since cutting more wood is on my short list of things to do this winter. The process was easy, and we were on our way in a short time. Then came the hard part.

Over the course of several days of grouse hunting, I kept my eyes peeled for an area where we could choose from several shorter, fuller firs or spruces. After miles of trekking though the woods, I wasn’t coming up with much. The best place I found was where the road bed had been shifted west years ago, leaving the old road to grow up with grasses and dozens of new little conifers. It wasn’t all that far off the county road, which didn’t exactly seem idyllic. But it wouldn’t be practical to drag the tree (and our kids) for miles anyway. 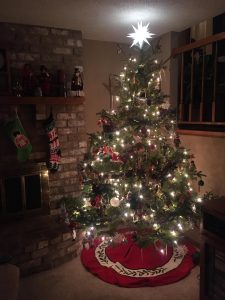 The morning of our departure, we donned our outerwear, threw in some cutting tools and old bedding, and went to find our tree. With a few inches of snow on the ground, the setting was perfect.

We began looking over our options. All we found at first were spindly Balsam firs. They surely wouldn’t support many lights or ornaments. I was worried our prospects wouldn’t improve, but we were having fun.

After a couple hundred yards, the trees started to look a little better. I don’t know why, but they were fuller and more sturdy on the whole. By this time the kids were really getting into evaluating the specimens and talking about each tree’s good and bad attributes. Before long, we’d narrowed it down to two white spruces. When the final decision was made, I set the saw to the bottom of the trunk and made it official.

At the car, I laid it on an old sheet, wrapped it loosely, and held onto the seams. Then my wife pulled the tree forward a foot or two, which pulled the limbs closer to the trunk, reducing the diameter of the whole package. We wrangled some ropes around it and tied it onto the roof rack. I fully expected to redo that wrap job for the long drive home. But back at the cabin, I decided it was already folded up adequately, so I rolled it all in an old mattress cover and put more rope around it. It traveled perfectly that way.

After recutting the trunk, it waited in a tall bucket of water while we celebrated Thanksgiving. With another trunk cut and some trimming of the bottom branches, it was placed in our family room and decorated. Unfortunately, a fir would have been a more fragrant choice, but it doesn’t really matter. It is a constant reminder of a fun activity in the woods and possibly the beginning of a new tradition. 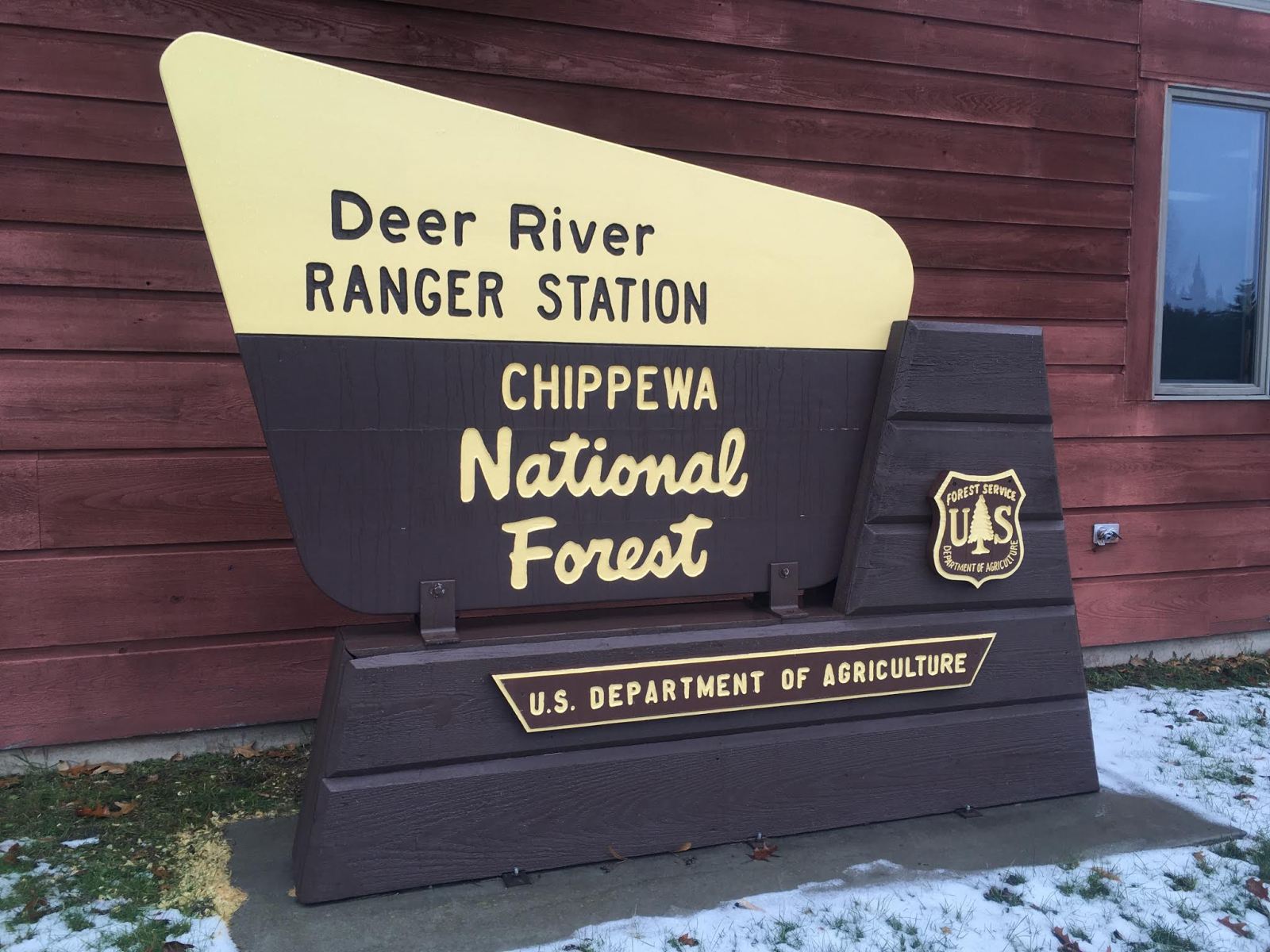 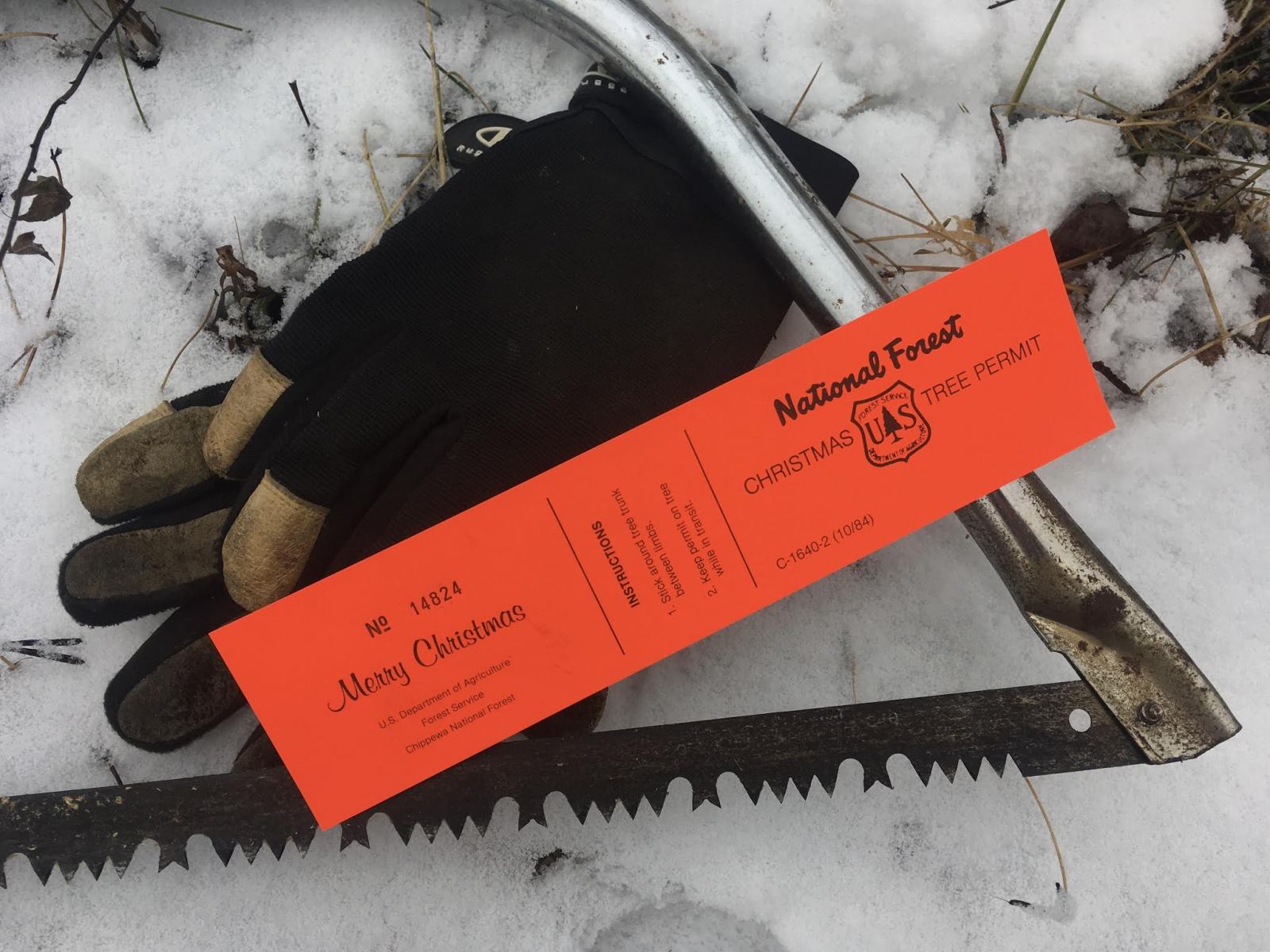 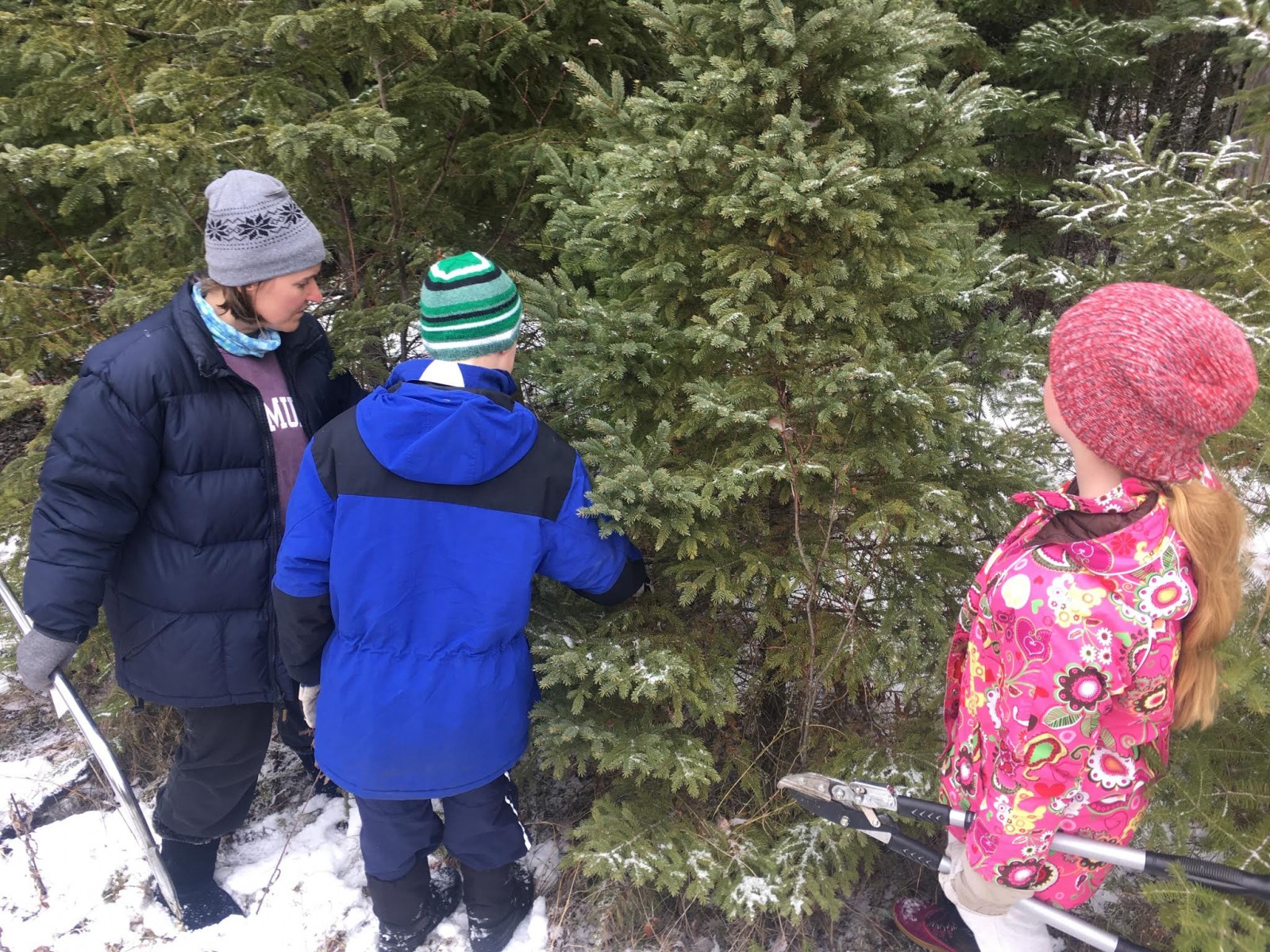 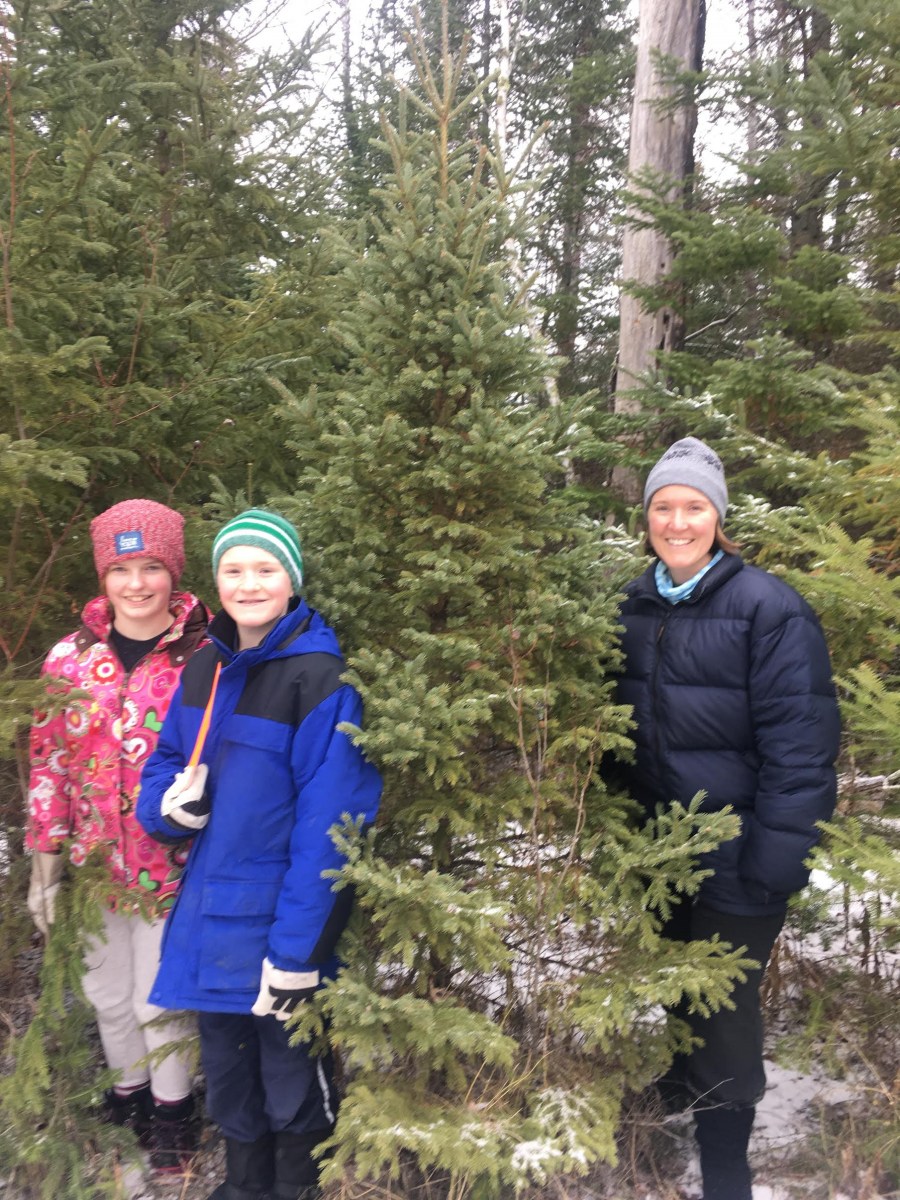 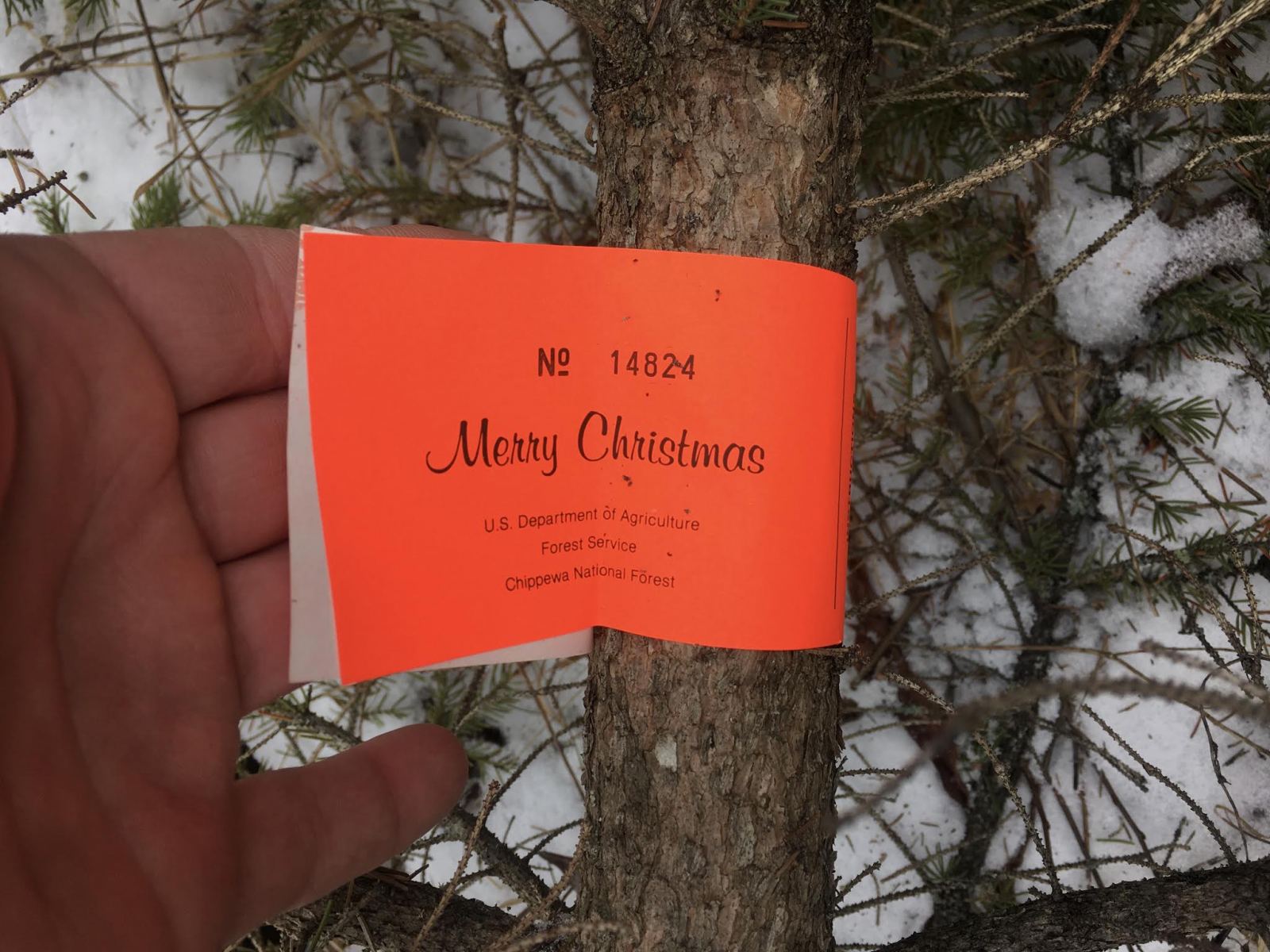 If you’d like to do this, there isn’t much needed besides your $5 (or $25). If you don’t have a saw, you might easily be able to borrow one. You’ll need some ropes or other tie-downs, and a plan for how it will attach to your vehicle securely. Also, make sure the trunk is pointing forward, with the top trailing behind you.

It only took us about 45 minutes to find and cut our tree, but that is because I already knew where we had a good chance of finding a good one. If I hadn’t done any scouting, or if it had been deeper into the woods, it would have taken a bit longer. In any case, it was a fun family activity, and a great way to get kids into the outdoors.

Video of Our Experience