Our little Ford Escape slinked down the resort ramp between rumbling trucks and wheelhouses, onto the white expanse. It was a few minutes before sunrise, though we wouldn’t see the sun that day due to thick cloud cover. Winds were moderate and temperatures were expected to rise about ten degrees to near 30 by day’s end. It wasn’t a picture-perfect day, but it could have been worse. 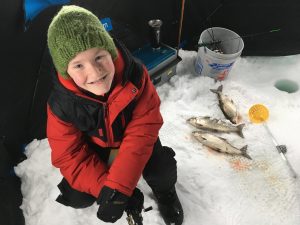 The plan was to visit a mud hole where I’d had good action on tullibees two years ago. It sits between several surrounding mud flats, about 35 feet deep at its deepest. If we didn’t encounter many tullibees, I had another spot nearby to try. As it was, we had that hole to ourselves, so I felt good about our chances.

Expectations were low as far as catching fish was concerned. When I go out myself, my goal is usually to catch something. When I take my kids, however, having fun is the prime mission.

We soon had the house set up and holes drilled. I made sure they had places to sit and rods in their hands right away. It was a good thing, too, because it didn’t take long for my daughter to hook into the first tullibee. It was a fine specimen, about 14 inches. There’s nothing like catching good fish to set the right mood.

Over the next few hours, tullibees would cycle in and out, but the first flurry of action seemed to be the best. When the bite cooled off a bit, my son started losing interest. I offered to put a minnow on his bobber rig so he wouldn’t have to keep jigging. It was unknown to me if a tullibee would eat a minnow, but I found a tiny one and sent it down the hole. It turns out they will indeed eat minnows, and that next fish was the biggest so far- about 15 and a half inches long. That put a smile on my boy’s face, all right. He wasn’t catching as many fish as his sister, but being able to claim the biggest one seemed to make up for it.

The fish kept coming back and we picked off one or two every once in a while, so we never felt the impetus to leave that spot. The kids stayed warm in our Clam hub house, which kept them engaged. Abundant food also did its part in keeping them happy. Not once did they ask to leave early, which was a sure sign they were having a great time. But they could not have had as good a day if the tullibees didn’t do their part. 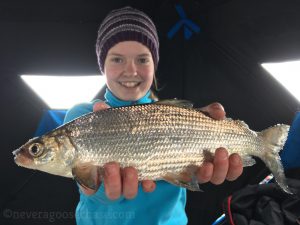 In all, they caught 15 nice-sized tullibees between the two of them. Those fish were definitely turned on that day.

I know we got lucky, and I’m not overlooking that fact. But I also know that if I’d insisted we spend the whole time trying to find walleyes, it would not have been the same. There’s no way I could have arranged for them to catch as many walleyes as they did tullibees. Plus, they already knew how good those fish would taste smoked, and every time one came through the hole somebody would say how much they were looking forward to eating it.

I’ve said it before and I’ll say it again: kids love eating the fish they catch. I believe it’s a powerful recruitment tool that is, sadly, rarely mentioned. It gives kids a sense of ownership and pride in their experience that ties into their life at home. After all, everybody has to eat. But it’s not just a utilitarian matter: finding and gathering our food is a primal urge that tugs at each of us, no matter how far removed we are from our food source.

With about an hour and a half to go before sunset, we packed up and headed to the top edge of a nearby mud flat. Since the snow was moderately deep, it wasn’t hard to find a spot away from trucks and houses and commotion.

It was clear my kids were getting tired and I didn’t want the length of the day to fray the edges of their enthusiasm. So I promised we wouldn’t stay too long before heading to the pizza joint, and set them up in the house with jigging rods while I set out tip-ups. They did a great job of staying engaged despite not seeing any fish on the sonar. I think the memory of those vigorous, hard-fighting tullibees was enough to keep them going. 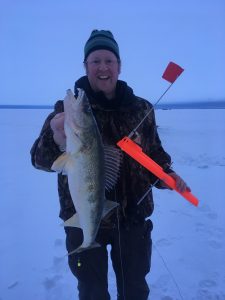 When I was done with tip-ups, I picked up a rod and took it outside to probe some of the extra holes we had drilled. Within a minute at the first hole, a bell rang out from one of the tip-ups. The kids came out of the house in time to see me set the hook and pull up a nice walleye of 22 inches- right in the middle of the slot. There was no question we would keep that fish. After all, this big kid loves to eat the fish he catches.