I don’t keep a bucket list. If I did, one of the items on it going into 2020 would have been ice fishing Devils Lake, North Dakota. When that opportunity recently landed in my lap, I couldn’t resist.

It was a “Communicator Camp,” arranged by the Association of Great Lakes Outdoor Writers (AGLOW), where Devils Lake Tourism and Clam Outdoors hosted several media professionals.

We assembled the first night, and were given a warm welcome. Two members of the Clam Outdoors Ice Team– Thayne Jensen and Tony Mariotti- also gave us an overview of all the equipment we’d be using. Everything sounded good until the conversation turned to the weather.

Conditions had not been favorable as of late, and weren’t expected to improve while we were there. I didn’t care. I was confident we were in good hands, and that I would definitely catch more fish than if I’d been stumbling around on that huge lake all on my own. I couldn’t wait; the next ten hours couldn’t pass fast enough.

Day One: Getting to Know You 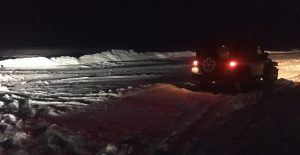 I woke up that first morning a full hour before my alarm; it seemed I couldn’t escape my excitement, even in an unconscious state. When we had all assembled, we headed through town and across the lake. The snow drifts were sometimes impressive, but not ultimately impassable. Just a few hundred yards short of our destination, we encountered an ice ridge that was too long to circumvent. Previous tracks showed where somebody got very stuck when they tried to cross it, so I was fine with taking the long way around.

When we finally got some holes drilled and things unloaded, I hopped into a Yukon XL Thermal shelter and started catching walleyes immediately. They were active but not eager biters, so Tony helped me refine my presentation. That made a difference. We sat in that spot several hours and picked off fish here and there as they came through. While many were small, the numbers of fish were impressive. We received word that perch were stacked up in another spot, so we headed out about 1:00. 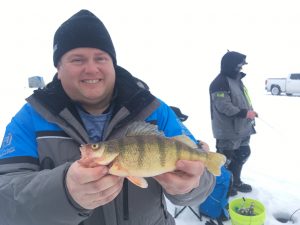 Those fish must have heard I was coming. They were scarce when we arrived; only a handful were scattered about in that spot, which was over 40 feet deep. Since chances were few and the perch were biting lightly if at all, it was crucial to detect those bites when they occurred. The incredibly thin, straight-hanging Frost Ice braided line helped me feel those tiny taps and pull a couple small perch up. I tried a few different lures and hopped around to different holes, trying to make something happen. The chunky perch ultimately gave me the slip that afternoon. Some in our group did connect with a couple nice ones, which indicated we were doing something right.

The last spot of the day was a classic Devils Lake location: in about 20 feet of water, over submerged trees. Branches could be seen on my sonar screen there, and my hooks stuck to them a time or two. We were expecting walleyes and a few showed up- just not for me. I did, however, hook my own Devils Lake jumbo perch. It felt good to get that monkey off my back. 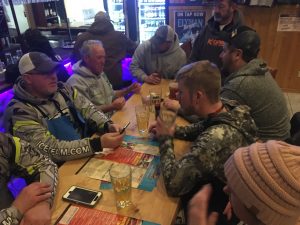 We capped off the day by having supper at Proz Lakeside– a great spot right on the lake.

The next morning we fished in rental houses from Woodland Resort, in Creel Bay. The first location was on a break where walleyes were expected. A few small ones gave us some action, but nothing we were hoping for. The rest of our time was spent a short distance away, over the mud in about 43 feet of water. Unlike the previous day, we could see fish on our Vexilars most of the time. However, they were in the same apprehensive mood.

I shared a house that day with Dave Mull, an outdoor writer from Michigan. For a while, some perch would come through and we would both have a few moments of activity. Many fish gave the impression that they would bite, but few did. I managed to set the hook on a couple nice perch, which were promptly tossed out the door and onto the snow. 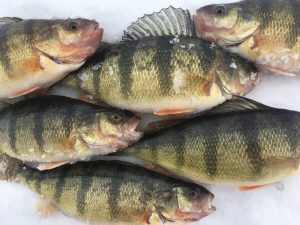 I wondered if a simple hook-and-minnow might get some looks, so I rigged that up and dangled it in one of the empty holes. No fish came up on that rod, but it seemed that when the perch came around they would linger a bit longer. My little “decoy” may have held their interest momentarily, or they may have been slowing down- it’s hard to say. Either way, I’m glad I tried it; switching lures seemed to have no effect that morning.

By the end of our time there, Dave had caught two fat perch and I’d caught four. It was truly a pleasure to finally lay hands on a few jumbo perch.

Whether I’m out for two hours or two days, each fishing outing teaches me something. I came away from Devils Lake with new memories, new skills, and a whole lot to think about. Here are a few thoughts that have been bouncing around in my head ever since.

Ice fishing gear has come a long way in 20 years 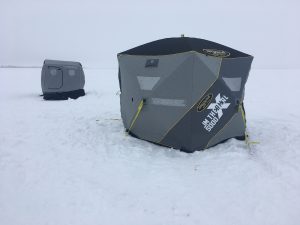 From 2000 to 2002, I worked in retail selling fishing goods, including what was available for ice fishing at the time (which wasn’t that much). The number of ice fishing companies and their products have exploded since. Some of what’s out there is worth buying, and a lot of it is not. The essential items remain constant, but they continue to evolve and improve. Portable houses are a good example.

The Fish Traps were relatively new in the early 2000s, and it was a big deal when they changed fabrics and seat styles. I owned one for over 10 years, and became very acquainted with it. As I sat in the comfort of the Yukon XL, I realized almost no aspect of Clam’s flip-over houses has remain unchanged. From the outer fabric to the seats, it’s obvious Clam has been re-examining and re-designing to make their products better to use. The system for managing the support poles is about a thousand percent better than it was back in the day, which is enough to make me want a house of that style again. Unfortunately, I can only haul hub-style shelters right now, so that’s how it’s going to be for a while.

I’ve used braided line through the ice for years, but never took it seriously and didn’t know how far it has come. Clam set us up on this trip with rod/reel combos (Jason Mitchell Gen8), strung with Frost Ice line (some fluorocarbon, some braid). I had 6# braided line, and was immediately impressed by its small diameter, how limp it was, and its low visibility. These are all great attributes for ice line, especially when the bite is weak and every opportunity for a hookup is precious. I was so impressed by the Frost braid, when I got home I bought some 3# Frost fluorocarbon and one of the Genz in-line reels to put it on. I’ve already put it to work a couple times and there are many trout and panfish days ahead of me yet this year. I will be posting a season-end evaluation of my experiences with those lines, so watch for that.

Even an outstanding fishery like Devils Lake will make you work 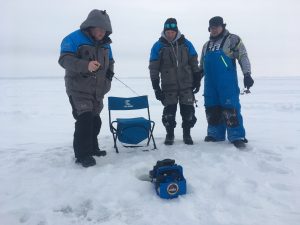 Ice fishing at Devils Lake is downright legendary, and tales of buckets full of fish are all over digital and print media. But it’s not always a cake walk, as we found out. Even though we were clearly in the right places for almost the entire two days, the fish were not in the mood to bite. Sunny skies apparently would have changed the mood of the perch. Unfortunately, that is one component that we humans will never have control over. It was frustrating, but there was nothing to do but fish hard and make the most of it. Sure, it would have been nice to come home having caught limits of walleye and perch, but I was happy to have caught what I did. Besides, catching a few walleyes and several jumbo perch would be considered a triumph in most other places.

Yes, no matter where you fish, you can always be victim to non-optimal weather conditions. Those are the times to use all your knowledge and best skills, and crank up the determination. In rising to the challenge, bold moves may be necessary. There’s always something you can do differently, for example, whether it’s moving to a different spot, changing baits, or overhauling your bait presentation.

When I get discouraged, it’s sometimes hard to motivate myself to make those kinds of changes. But doing nothing is rarely the right choice. In a place like Devils Lake, you know good fish are out there, and in large numbers. If you’re willing to pursue them, they will teach you lessons and make you a better angler. I know I learned those kinds of lessons on this trip.

If I have to work hard to catch a few fish, they will always bring me more satisfaction than a pile of fish that practically jumped out of the hole. I also love a challenge and learning new things. And there is no end to my enthusiasm for learning about a lake and building on previous experiences. For those reasons and because there’s always a chance for crazy-good ice fishing there, Devils Lake hasn’t seen the last of me.

I dropped into the bait shop at Woodland Resort to pick up an assortment of the Clam lures we were using, just to give them away! Sign into YouTube and comment for your chance to win: