Well, the walleye and northern pike seasons ended yesterday here in Minnesota. This always leaves me feeling a little adrift with respect to the remainder of my ice fishing season. Most of my energy is spent chasing those toothy predators; nothing else quite measures up.

But I love ice fishing. I’d rather make use of the time left than hang my head and stuff my gear back up in the top of the garage again. 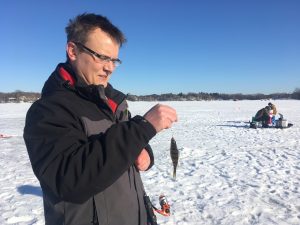 If you’re like me, you could use a few ways to extend your ice fishing season. Perch and panfish always come to mind here in Minnesota, and there are two good reasons for that. First, the season doesn’t end. Second, they’ll start cooperating again with oxygen levels rising and spawning season approaching. But the number of places to find truly large perch is small these days, and panfish are showing signs of overharvest. Fortunately, there are many more opportunities if a person is willing to branch out and do something new.

These members of the salmonid family are quite active in the winter months. They are fun to catch and top-notch eating, too. I like to hit Mille Lacs once or twice a year just for the tullibee action, and I’m hoping the “Tullibee Hole” in the south end of the lake will heat up while I can still drive out there this year. 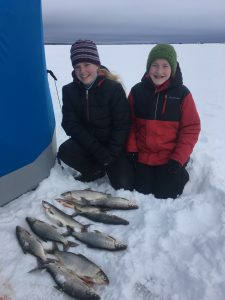 Tullibees and whitefish generally inhabit the colder, deeper lakes in the northern half of Minnesota. Other notable destinations include Leech Lake and sometimes Winnibigoshish for tullibees and Lake of the Woods for lake whitefish.

These silvery torpedoes cruise the muddy bottoms, sucking up invertebrates. Successful anglers will be found offering smaller baits that cater to that kind of appetite. Catch a few and treat them to a day in your smoker– I don’t think you’ll be disappointed.

The winter seasons for lake trout and stream trout alike extend until the end of March, which will basically cover the rest of the ice season. The lakes where stream trout are stocked are basically put-and-take fisheries since they don’t reproduce in lakes. For that reason, I’m not bashful about keeping some to eat. When it comes to lake trout, I’m a bit more selective, but still love to take one or two home as allowed by the regulations. The BWCA has many trout lakes a person could walk to and from in a day, and will easily still have ice until the end of March even in warm years. Try your hand at winter camping to make it a real adventure.

I have yet to catch an eelpout. That’s mostly because I don’t live anywhere near good places to catch eelpout (or burbot, ling, freshwater cod, etc.). When I was young, people used to catch them famously in Mille Lacs and toss them out in the snow like garbage. They’ve all but disappeared from there now, due to a warming lake and probably a host of contributing factors. But the ‘pout are still found in abundance other places; the closer you get to Canada, the more likely you are to find them.

There has actually been a surge of interest in eelpout the last few years, and that’s kinda cool. This is probably due to their catchability in the late season as they prepare to spawn. The problem is, an increase of interest could put a strain on the population. So it would be wise for anybody seeking them to take smaller specimens for the table and release the larger ones for spawning- as we do with other fish at the top of the food chain.

Yesterday’s tip-up fishing extravaganza ended in a whimper and I was left with a lot more sucker minnows than I care to admit. Fortunately, the walleye/sauger/pike season is still open until March 1st on the St. Croix border with Wisconsin. I might head there later this week. On the Mississippi, that season doesn’t actually end! Not bad. Plus, the St. Croix is host to an ever-increasing population of large lake sturgeon, which have been getting a fair amount of attention in recent years.

South Dakota border waters also offer walleye/northern fishing until March 1st, and Iowa border waters boast a non-closing season just like the Mississippi. I’m actually contemplating a run for the Iowa border this year because I’d like to catch my first yellow bass. That would be a fun way to spend a warm afternoon…

Rules for our border waters with Canada are also generous, albeit somewhat complicated. Check the regulations before you go.

2 thoughts on “Ways to Extend Your Ice Fishing Season”