Skip to content
Foraging - Get Outside - Recipes - What to Forage

Once again, I blame social media. For what, you ask? For the ridiculous fame that ramps seem to be “enjoying” nowadays.

Of course, people have known about ramps for a long time, even holding spring festivals for them in parts of the eastern U.S. where they used to grow prolifically. I say “used to” because it is well known that wild ramp populations are hurting. Because of that, they really don’t need any extra harvest pressure. Every foraging group I subscribe to on Facebook, however, is currently experiencing Ramp Mania.

Ramps (Allium tricoccum and Allium burdickii) are native to roughly the eastern half of the Lower 48 and Canada. Members of the onion family, they are one of the first plants to emerge in the spring. They prefer rich soil and shade, forming colonies in hardwood forests. Once established, they spread both by seed and vegetatively, sometimes over several acres.

Occasionally called “wild leeks,” they grow a bulb of modest size, with two or three rather wide leaves showing above the soil (three leaves generally indicate older specimens). They enjoy early-season sun exposure before the trees leaf out, then bloom and set seed. By the heat of the summer, the leaves will have withered away. A. tricoccum resembles Lily of the Valley or tulips, and shows a reddish stem near the soil. A. burdickii has narrower leaves with no reddish tint, and is much less common.

Ramps For The Future

Ramps are slow to grow and mature from seed- it is often said to take 7 years. For that reason, one rule of thumb out there says you should only harvest 1 in 7 ramps. Others say 1 in 10, which I find to be more reasonable. 1 in 7 suggests establishing a state of equilibrium (“don’t take more than can be replaced”). 1 in 10 allows for some expansion of any given patch of ramps. Of course, this all goes down the toilet when more than one person comes along and takes any more than 1 in 20.

Their slow regeneration process is probably the main reason why ramps are in shorter and shorter supply. They are Species of Special Concern in three states, classified as Commercially Exploited in Tennessee, and endangered in New York. As far as Minnesota goes, I have rarely encountered ramps growing on any public lands, which suggests a general overharvest. I have not extensively explored parts of the state I suspect have greater concentrations of ramps, but that really doesn’t matter because rules for public land usage rarely allow that kind of harvesting.

I am lucky to have access to my own little patch of ramps on a small plot of private land. I first discovered them about six years ago, right around Mother’s Day (which is about when they begin to disappear into the expanding greenery). I will dig whole plants out of the ground on occasion, but usually only cut some leaves. In the last six years or so, my ramps have become much more numerous, and I credit my conservative harvesting style for that. 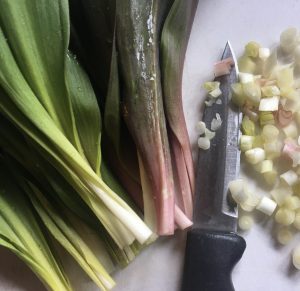 As with most foraged food, I prefer to showcase the inherent flavor of ramps. Most of the time, that flavor is described as “a combination of onion and garlic.” That makes sense because onions, ramps, and garlic are all related. To me, they’re much more oniony than garlicky.

Anyway, I like to use ramps in dishes that will allow the taster to appreciate them. That means pairing/including them with other flavors that won’t overpower. At our house, that means lots of eggs. The most common use will be in a simple scrambled egg preparation:

-Scramble eggs in a bowl

-Add a handful of chopped ramp leaves and cook only until wilted, less than 1 minute

-Add eggs and scramble as usual

-Remove to plate and top with shredded cheese if desired

By extension, ramps work well in omelets or other egg dishes. We enjoyed a sensational ramp and ham quiche on Easter morning this year. The great thing is, you don’t need too many at a time with eggs: maybe four ramp leaves per person for scrambled eggs, and a dozen or more in a quiche.

There are lots of recipes out there for ramps, and a person could really substitute them for onions anywhere within reason. I just wouldn’t use ramps and onions in the same recipe, because there’s little chance you’ll be able to taste the ramps themselves. If you’re looking for ideas, discover some ways to use ramps on this ramp recipe post.