Ramps are special, and the season is short. For some foragers, it’s the taste of Spring, and they wouldn’t miss it. I’m not that fervent, but I do like them nonetheless. This year, I made a point to branch out and do more than scrambled eggs with ramps. Now, I’m no chef, so don’t expect any groundbreaking ideas or recipes here. My perspective is that of an avid forager and great fan of trying new things.

One of my principles when cooking with foraged foods is not to overwhelm a foraged ingredient with other flavors. I mean, what’s the point if you can’t taste it? So, my “recipes” are usually fairly minimal. They are also often not precise, because I’m the kind of guy who does things by feel and instinct in the kitchen. For that, I offer my apologies to the people who are going to wish I’d measured my ingredients! I don’t like to make recipes too wordy, so it will help to read each all the way through before commencing.

Note: Traditional ramp cooking usually includes—even requires—the bulbs. Because ramps are being harvested at unsustainable levels (and also because I want my own ramp patch to keep growing) I normally don’t use the bulbs. However, I will sometimes note how to use both bulbs and leaves in some cases where I have experience doing so. 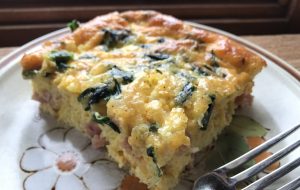 This turned out to be unexpectedly good the first time, which caused me to repeat it two days later. The ramp leaves seemed to migrate toward the top, but the whole dish was infused with rampy essence.

-About ¼ cup of cream

Scramble eggs in mixing bowl with cream. In a small frying pan, melt a few tablespoons of butter. Toss the chopped ramp leaves in and sauté just long enough to make them wilt (if using bulbs too, sauté chopped bulbs a minute or so before adding the leaves). Scoop them carefully from the pan and add to eggs. Add ham also and mix it up, adding a little salt and pepper, if desired. Pour the melted butter from frying pan into a glass 8×8 baking dish to coat bottom and sides. Add eggs and bake at 350 degrees, until a butter knife inserted in the middle comes out clean. 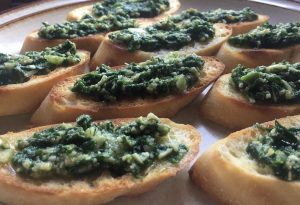 For the pesto itself, I will not offer the recipe, instead this link to Hank Shaw’s recipe. I made it this year for the first time and it was a huge hit at our house. We had a pesto blowout meal, with some served over vermicelli and the rest on crostini. Anyone can boil noodles, so I won’t tell you how to do that.

As for the crostini, once you make the pesto, all you need is a baguette. Cut baguette into slices ½ to ¾ inches thick. Brush both sides lightly with olive oil and put on a baking sheet. Bake in the oven at 375 degrees for about seven minutes per side, or until desired browning is achieved. Remove from oven and top with pesto when cool enough to be handled.

Hank’s recipe made enough for about 18 of these pieces. It could be more or less, depending on how thick you apply it. This would be a great addition to a larger meal, perhaps featuring fish or game or more foraged goods. 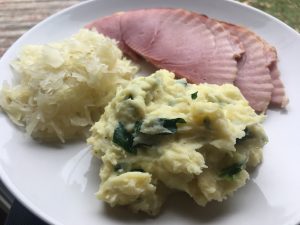 I’ve somehow gotten in the habit of putting things in mashed potatoes, one of my favorites being Hen of the Woods mushrooms when they’re in season. Ramps and potatoes seemed like a good fit to me. I mean, garlic mashed potatoes have been a thing for a long time, right?

Boil and prepare mashed potatoes as you normally would. For me, this includes a generous portion of butter to sweeten them, as well as milk to loosen them. I had cream on hand the day I tried these, which was tasty. Sour cream would also have been welcome.

As for the ramps, you’re probably looking at 20-30 ramp leaves depending on the volume of potatoes. (About 20 leaves for 4 big potatoes, for instance. Scale up and down as needed or desired) Chop ramp leaves and wilt in butter (as outlined above in Quiche du Ramps). Stir ramps into potatoes enough to blend. Salt and pepper at will. 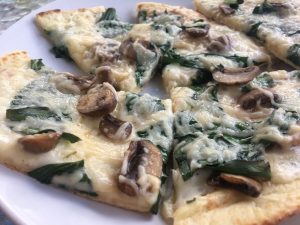 Naan bread is usually at our Aldi, and we use it to make pizza. White sauce seemed right for this, and I found an easy recipe on the web. I would have used morels if they were in season, but we were a little early yet.

Spread a layer of white sauce across naan, add sauteed mushrooms and uncooked chopped ramp leaves. Top with cheese and bake in 425-degree oven until cheese starts to brown.

Shredded parmesan was used in this iteration, but mozzarella or other italian cheeses would have worked. I topped with enough ramps to nearly cover the surface of the pizza, which I thought was more than necessary. Taste tests indicated I could have used twice as many. Seriously, go nuts. 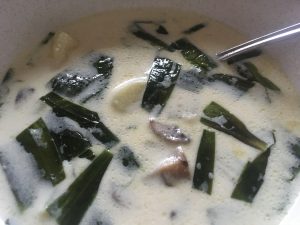 This was a throw-together effort based on a couple soup recipes. The mushrooms were a nice addition; obviously foraged mushrooms would be ideal. I used half a package of baby portobellas, but could easily have doubled that.

Melt butter in pot and saute mushrooms. Remove mushrooms and add potatoes to pot for a few minutes, stirring occasionally. Mix in ramp leaves. When ramps have visibly wilted, stir in a couple tablespoons of flour, making sure no flour is left dry. Follow immediately with broth. Simmer until potatoes are soft, then stir in mushrooms and half & half. Add salt and pepper to taste, and heat until warmed through.