What do you get when you take a pandemic-weary man, work him nearly to exhaustion, cook him in the sun, and feed him a couple fish?

A question for the ages, no doubt. In order to learn the answer, I left home hours before sunrise on May 18th. My destination was BWCA Entry Point 52, Brant Lake- somewhere I’d been trying to go for over a year. 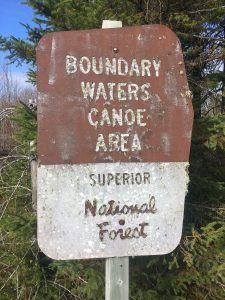 I actually held the same permit last May, planning to go there with my wife. A family funeral kept us closer to home and we were fine with that. I might have gone sometime over the last winter, but heavy snow plagued Minnesota’s lakes with woeful amounts of slush, and I don’t knowingly wander into that kind of trouble on solo trips. As the pandemic raged, my eyes were fixed on a spring trip with equal amounts of hope and trepidation. Just as the cumulative effects of coronavirus isolation threatened my last nerve, the Forest Service opened the Boundary Waters Canoe Area for business as usual. I would be saved from myself- with no time to spare. Or so I thought.

In hindsight, I was already over the edge. Tensions created by lost work and too much time at home were hard to shake. As I labored across seven lakes and seven portages that first day, I expected the bonds of civilization to dissolve from my shoulders and neck as they had so many times before. At my campsite on Bingshick Lake I felt no change. After a day trekking in the sun and feeling quite spent from so much portaging, I needed to slow down and adjust my attitude. Tent was erected and fishing gear was assembled. Fishing always puts me right, after all.

But it didn’t. My target was Brook trout, and I desperately wanted to catch my first one ever. The wind was ripping down the length of the lake and my efforts that night were confined to protected coves and casting from camp. By nightfall, I had nothing to show.

The entire next day was spent fighting the wind, casting from shore, and absorbing unseasonable warmth and sunshine. I didn’t have a meaningful encounter with a single fish. There was a mayfly hatch underway, which probably explained a nonexistent bite, but offered no consolation. By nightfall I was dehydrated and discouraged. 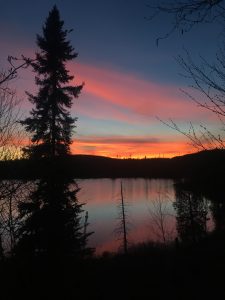 As I listened to the loons that night while contemplating my options, I lamented the fact that I’d planned a trip with so many portages. It was portaging that was wearing me down so badly. Unfortunately, there would be many more ahead of me no matter what I chose to do next. As much as I dreaded another six lakes and six portages, staying on Bingshick wasn’t an option. I knew what I had to do: get to Gillis Lake.

The Road to Recovery

Without a whiff of regret, I got an early start. Accompanied again by a stiff wind and unmitigated sunshine, I descended-quite literally- to a new place.

About halfway there, I was struck by how rugged Warclub Lake was. Its cliffed, rocky shorelines offered a fresh, primeval beauty which doubled on Seahorse and doubled again on French. This was markedly different from where I’d started two days prior on rather benign lakes encircled by all shades of green and no topography of note. As I emerged from the portage path onto Gillis Lake, I beheld a place like none I’d been before, and my sense of wonder finally shoved my former self aside.

Despite a headwind and a deficit of energy, I could not wait to shove off from shore. I told myself I’d stop to eat and rest at the first campsite I could find. The very first campsite on my route seemed to have fallen into disuse and was unlocatable. The second was occupied.

I took a slight detour and dodged the wind by squeezing behind an island. Old growth pines stood sentry on its slopes. The breeze carried the perfume of their discarded needles and the lichens on the ground. I consciously knew how much I needed to eat in the middle of the afternoon, but I was drinking in my surroundings in a way I hadn’t in at least a year.

The third campsite was most of the way across the lake. It was clear I didn’t have enough fortitude to go campsite shopping, so I reluctantly claimed it. Since the area had burned in the Cavity Lake fire of 2006, there was minimal tree coverage. I huddled in what shade there was by the canoe landing and indulged in a few extra pieces of dried fruit with my tuna tortilla before departing again.

Across the way there was a wind-blown shoreline with a stream inlet where I expected to find fish patrolling. The water was still frigid since the ice hadn’t been off the lake long, and lake trout were expected to be in the shallows accordingly, looking for minnows to snatch up. One rocky point looked promising as it jutted out across the waves. I parked my canoe behind it and disembarked. 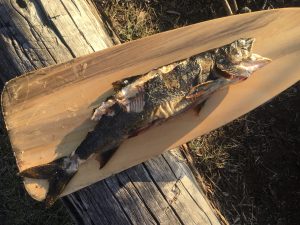 Within the first couple casts, a small lake trout latched onto my stickbait. I released it back into impossibly clear water and hustled back out to the point. A few casts later, its big brother succumbed to the same presentation. There was no question- a proper supper was in my grasp. The return paddle to camp was decidedly triumphant.

As sun sagged and heat relented, I huddled over the fire pit and carefully prepared the perfect fire to roast my prize.

Sweet silence descended on the lake. Beavers and loons traced lines across its surface. I coaxed smoky, juicy flesh from bones in the golden glow of waning sunlight, and it was apparent I had finally broken free of the orbit of life’s cares.

The first thing I did the next morning was waddle down to the cove at my campsite and take a couple casts. Just as the spoon approached my toes planted on the rock at water’s edge, a trout rocketed from the dark water and swiped at it twice before disappearing again. I was suddenly fully awake. A follow-up cast was sent in the direction the fish had gone. That trout came to hand, but not without a good struggle.

Later that morning I caught another in much the same manner as the first. It was a perfect lunch, again roasted over a cedar fire. In the shadow of my fat satisfaction I was inspired to travel to the next lake, Bat Lake, and set up camp for my final night. It is another native lake trout lake which offered an enticing opportunity for more shallow lake trout.

For the fourth night in a row I finished a cloudless day on the water, all-day tired but giving it everything I had left. The black flies and mosquitoes did their best to drive me to the shelter of my tent. I kept at it just long enough to catch the biggest lake trout of the trip.

So, what do you get when you take a pandemic-weary man, work him nearly to exhaustion, cook him in the sun, and feed him a couple fish?