They catch walleyes hand over fist, and rarely any small ones. Those people are like fishing heroes or something. Geniuses, maybe. 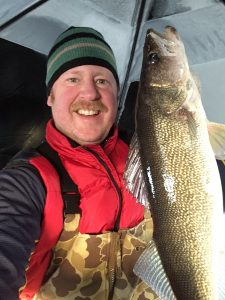 I want to be a genius too. So, once or twice a winter I’ll go to Mille Lacs and drill some holes and lay hands on walleye flesh. Honestly, it’s not all that hard if you’ve been paying attention. They’ve been making TV shows up there for decades, dispensing their wisdom:

Caught some dandies there in recent years. And the numbers of fish in “The Walleye Factory” are still nothing short of astounding. It’s usually enough to make me feel like a member of the genius club.

And then I drive home.

Well, what about all the places I and so many other people fish every day? I can tell you there are no “mud flats” on little old Burrows Lake. There are no “mid-lake humps” on Ruby Lake, or Marion, or Scotch. What’s a guy to do on a bowl-shaped lake so chock-full of weeds that you can’t find the bottom, much less bounce anything off it? Who’s gonna help me find fish if I don’t want to drive 874 miles one way?

I don’t know who it will be, but they will be my idol.

In the meantime, I’ll keep watching videos, trying to glean useful information. The problem is, I’ll often get knee deep into a video that seems generally informative and realize that what they’re telling me is pretty lake-specific.

Oh, you went 23 miles across the ice in a Sno Bear? You’re on Lake Winnipeg.

The sun just went down and the eelpout have moved in? Lake of the Woods.

You put on a blindfold, drove your boat 8 miles out, tossed a bare hook overboard and caught a 29-incher? Lake Erie.

Look, there’s nothing wrong with going to a world-class fishery. It’s fun and memorable. This past winter I went to Devils Lake for the first time to catch jumbo perch. It was a ball. I’ve never caught so many truly large perch and I’ll never forget it.

But there’s also nothing wrong with fishing in ordinary lakes with ordinary results. We mere mortals have been doing it for generations. We know lines break and buckets go home empty. We know that for every 24-inch walleye, we will have to unhook 80 eleven-inchers and 800 perch smaller than the average golden shiner.

Who’s going to make a video about that? 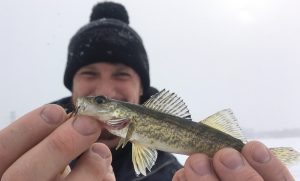