Berry foragers, rejoice! The juneberry crop this year appears to be robust- as was last year’s- and they’re fruiting right now. Never had juneberries? I’m not surprised. They’re easy to miss, but maybe you should give them a closer look.

The world has many names for the juneberry- including serviceberry, shadbush, and saskatoon- none of which refer to specific species. Minnesota has several species, not that it really matters. They are hard to tell apart and hybridize regularly. The Minnesota Wildflowers website lists four species, and a quick survey of the Bell Museum Biodiversity Atlas reveals there are at least twice that many here- again, not that it matters.

Juneberries of whatever species occupy mainly the forested regions of Minnesota. They grow as tall shrubs or short trees with slender stems. I’ve found some specimens with trunks in the three- to four-inch diameter, albeit rarely; most are in the one- to two-inch range. They are of the Rose family and are fairly closely related to apples. The leaves resemble those of apple trees, and the fruit has a mild apple-y flavor in my opinion.

Juneberries come in what I call a “rolling harvest” in that they are not generally all ripe at once on any given tree (like black cherries). This can cause the season to stretch out for weeks. Different parts of the state also experience harvests at different times; the one next to my shed at home ripens in late June, and I’ve found excellent crops in August up in the Arrowhead (the berries along the North Shore were the biggest I’ve ever seen, for what it’s worth).

At any rate, wherever you find juneberries it seems they ripen in step with blueberries. This makes them a convenient picking companion for blueberries, and they’re often close by. While blueberries love the sun, the juneberries will usually be hanging out along the margins of those same forest openings. Like chokecherries, juneberries seem to like that kind of “edge” habitat and fruit more heavily where they get a decent amount of sun.

One of the best places to look is along lakeshores. I picked a couple pounds from one little cluster just last week at a boat landing. A few days before that, I snacked on a few when we motored over to the rope swing. These were not isolated incidents, either. A person could do real well just cruising the outlines of lakes, keeping an eye peeled for pink and purple fruits hanging 3-10 feet over the water. 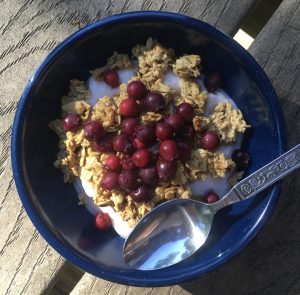 Amelanchier fruit is approximately the size of those blueberries you buy in the store, which tells me that if juneberries follow the laws of berry cultivation, the commercial varieties would almost certainly be the size of golf balls. It also means they would be nearly tasteless, so I can’t say I’m interested. Anyway, I like to take the berries that are anywhere from rosy pink to purple. They will turn a blue-black color when fully ripe, and almost lose all flavor at that point.

Despite having a mild, less-than-distinct flavor, juneberries are worth targeting. As is the case with so many berries, juneberries are a good source of some vitamins and minerals. Additionally, they are purported to have high levels of antioxidants- considerably higher than even blueberries, blackberries, and cranberries.

I’m looking forward to making our first batch of juneberry jam this year. Frankly, I don’t expect it to knock our socks off, but you never know. We made a mixed berry jam last year with juneberries, blueberries, and raspberries which was fantastic. Juneberries constituted the largest volume, followed by blueberries, with probably 1/6th to 1/8th raspberries. Each flavor was clearly present, and only a small amount of raspberry was needed for a slightly tart punch. If you make only one batch of jam this summer, try it. The best thing is, all three can be picked in one outing.

Juneberries certainly have their “off” years, so you can’t always count on picking enough for preserving. Lesser amounts are great with yogurt and/or granola. Due to their apple-like flavor, I think they could work well in apple/applesauce applications like muffins or even a pie. It will be fun to experiment in the coming months. Again, they are great as part of mixed-berry preparations, so keeping that in mind will help stretch their usefulness in your kitchen. 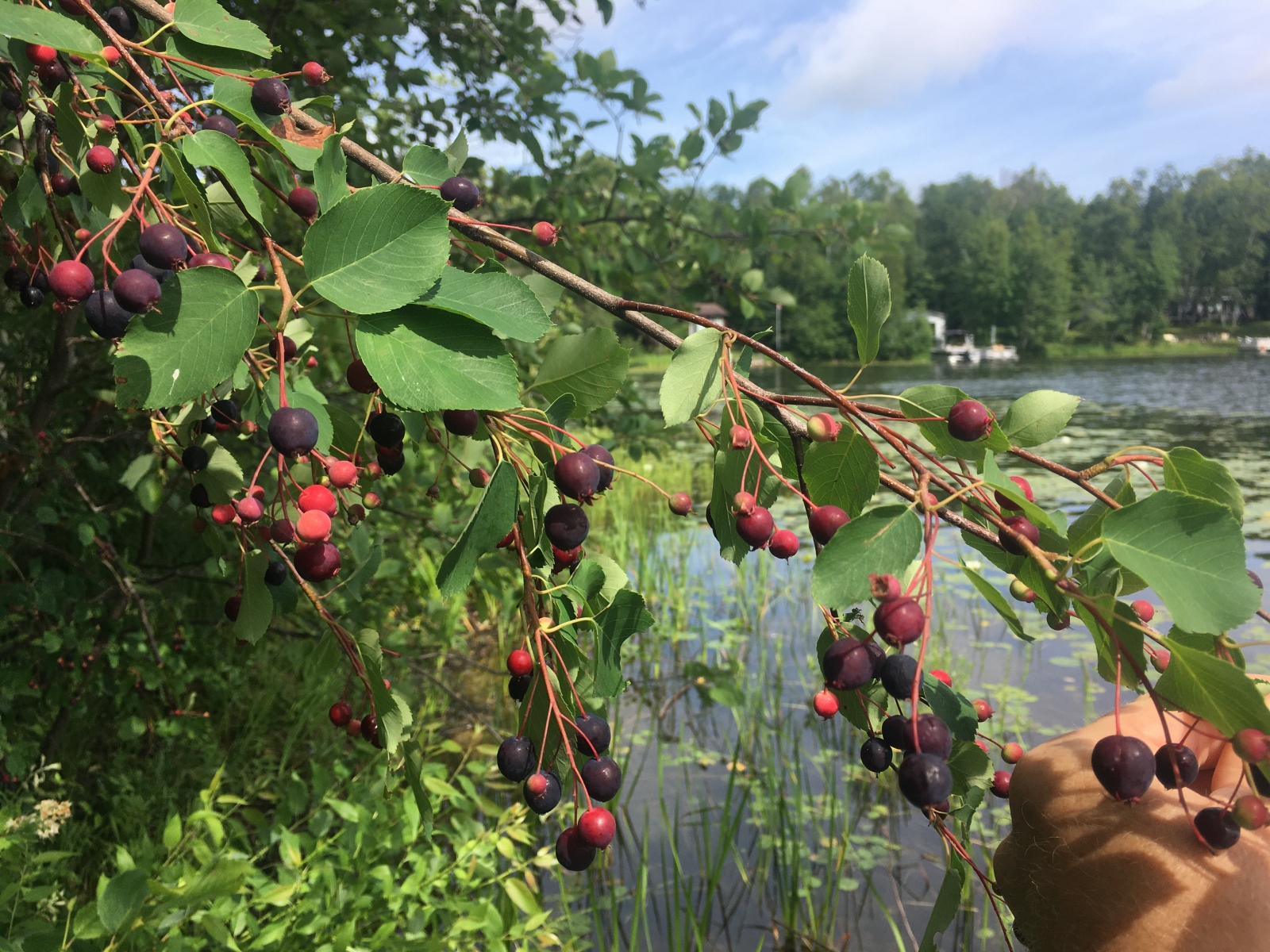 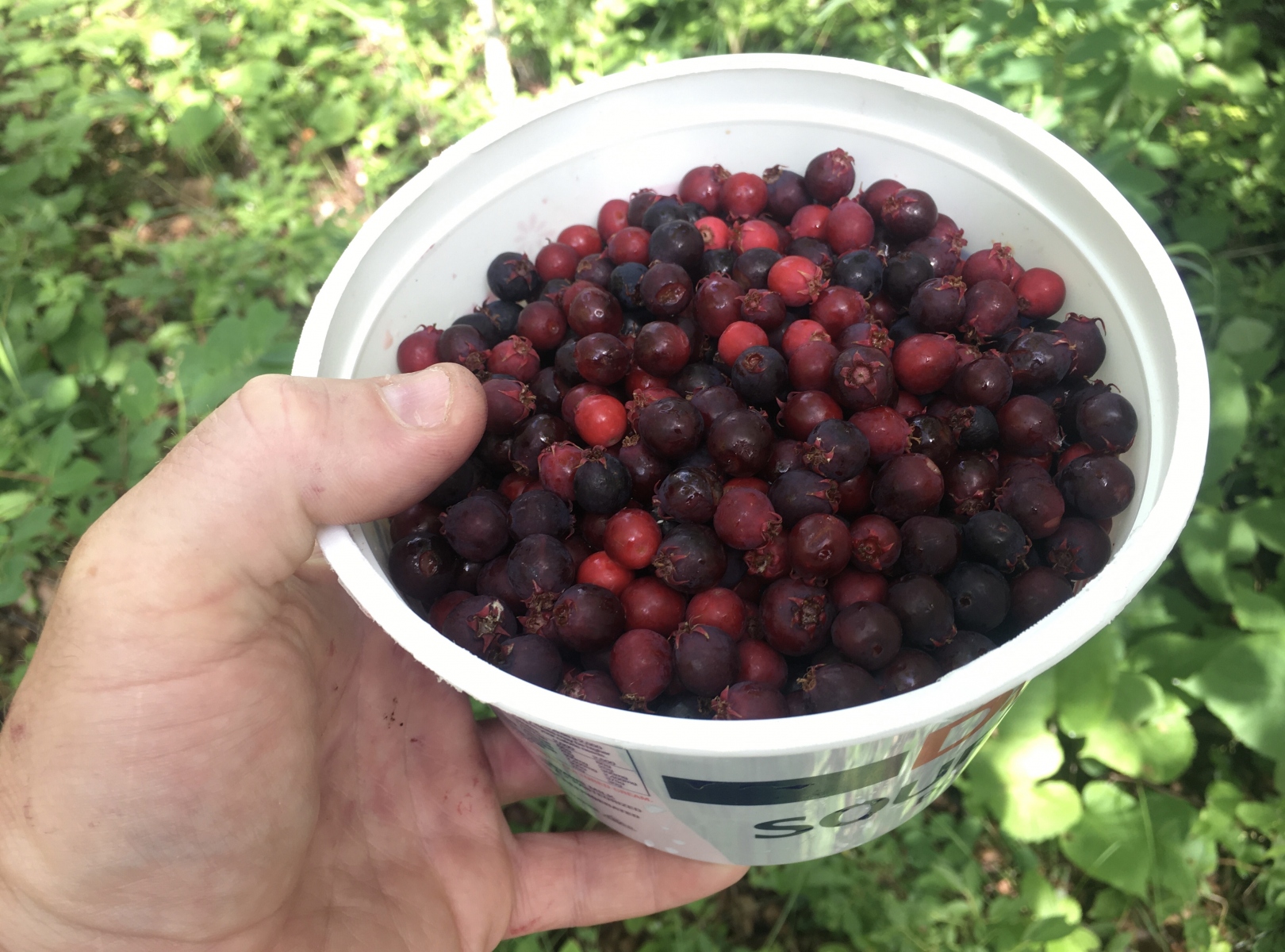 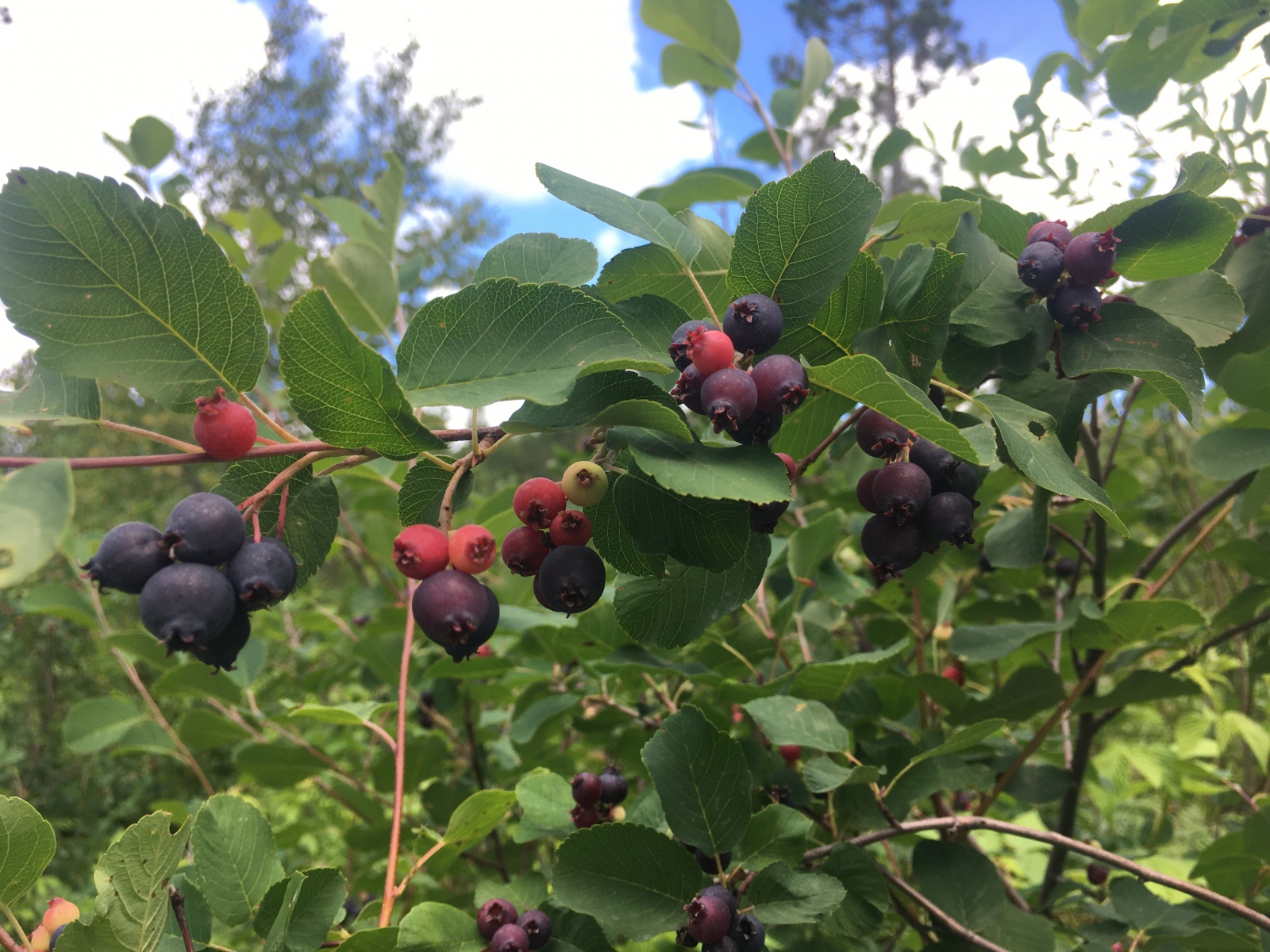