Skip to content
Foraging - Public Lands - What to Forage

It’s blackberry season. While I sit here typing this out in mid-August, I have a hunch there are literally tons of them out there going unpicked. And while not every year is good for blackberry picking, we’ve had good rainfall in 2020, which is a good sign. It was the same last year, when I literally picked gallon after gallon throughout most of August and into September, within a mile of my home.

This common (often ubiquitous) resident of Minnesota is found in the forested parts of the state, from Iowa to Canada. If one consults several sources, descriptions of growing conditions will be broad, which reflects the reality one will encounter in the field: Rubus allegheniensis is adaptable and can be found in all kinds of conditions. It’s not the only bramble with delicious black berries in the woods, but in terms of abundance it’s unquestionably the leader of the pack. 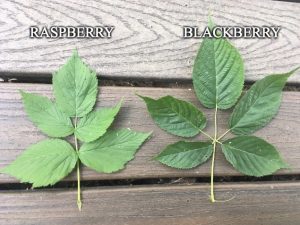 Sturdy, arching canes with reddish tint grow quickly and spread by rhizomes to colonize as much ground as possible. They often grow to 6 feet or more in height and much more than that in length. Showy white blossoms reveal their location in early summer, and stout thorns persist all year. As with common raspberries (R.idaeus), flowering canes usually have leaflets in groups of three, whereas non-flowering canes usually have leaflets in groups of five. The easiest way to distinguish them from raspberries is by their large, spreading leaflets, arranged in groups of five, radiating from a single point (palmately arranged); raspberry leaves on non-flowering canes are arranged in groups of two-plus-two-plus-one (pinnately arranged).

If you don’t already know, blackberries belong to the Rubus genus, along with raspberries, thimbleberries, cloudberries, and numerous others. If you asked how many Rubus species live in Minnesota alone, I would not know how to answer. Dozens, perhaps? A quick survey of the Bell Museum records reveals an incredible diversity of species and subspecies.

Even though I sling the term “blackberry” quite liberally while I’m eating fruit off the bush, not everything that looks like a blackberry is R. allegheniensis, nor is it even a “blackberry.” Rubus flagellaris (“Common Dewberry”) is perhaps the next most encountered blackberry-like fruit in Minnesota. In my limited experience, it can easily be found near allegheniensis, but doesn’t grow on canes nearly as tall, and seems to ripen weeks earlier. Rubus canadensis (“Smooth Blackberry”) resembles allegheniensis a bit more, but its range seems to be restricted mostly to the North Shore area and Carlton and Pine Counties. Rubus occidentalis (“Blackcaps” or “Black Raspberry”), while black, are really considered a raspberry, as the fruit structure is like that of a red raspberry- without a core.

Common blackberries will be found seemingly anywhere from shade to full sun, rich to poor soils, locations not completely sun-scorched or water-logged. Of course, they have their preferences and will grow and fruit best where they are not in the extremes. I find the best picking in medium soils with adequate moisture and sun over most of the day. It can be pretty easy to find them along dirt roads, logging roads, at the edges of forest openings, and in acreages recently logged.

In terms of specific places, I wouldn’t hesitate to look to state forests in the I-35 corridor north of the Twin Cities: Chengwatana, General CC Andrews, St. Croix, and Nemadji. Chippewa and Superior National Forests probably lie over the best blackberry range in Minnesota, and there are more acres there combined than one person could search in a lifetime. 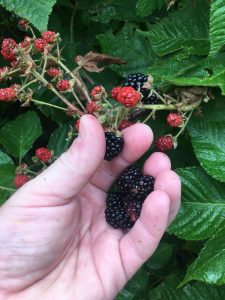 One of the best things about blackberries is that in a good year, a person can expect to be able to harvest many pounds of berries without covering much ground. Once you find a productive patch, you could easily pick a gallon or more, then again and again after intervals of several days.

Unfortunately, blackberries aren’t the all-stars that raspberries are in terms of taste. In my opinion, they are usually mild to moderately flavored and not too sweet. The blackberry jam we made last year was fairly lackluster. My kids love it nonetheless. I’m considering tweaking it a little this year by including some raspberries for some of their “zing.” In any case, they’re great in a mixed berry setting, adding a nice berry flavor that holds its ground but doesn’t overpower other ingredients.

Even though blackberries don’t have powerhouse flavor, they are still worth the effort in terms of nutrition as they are a good source of antioxidants and several vitamins and minerals. A handful tossed into plain yogurt or cottage cheese is a great way to use a few. Crushed, sweetened with sugar, and poured over vanilla ice cream is a good application for a cup or two. 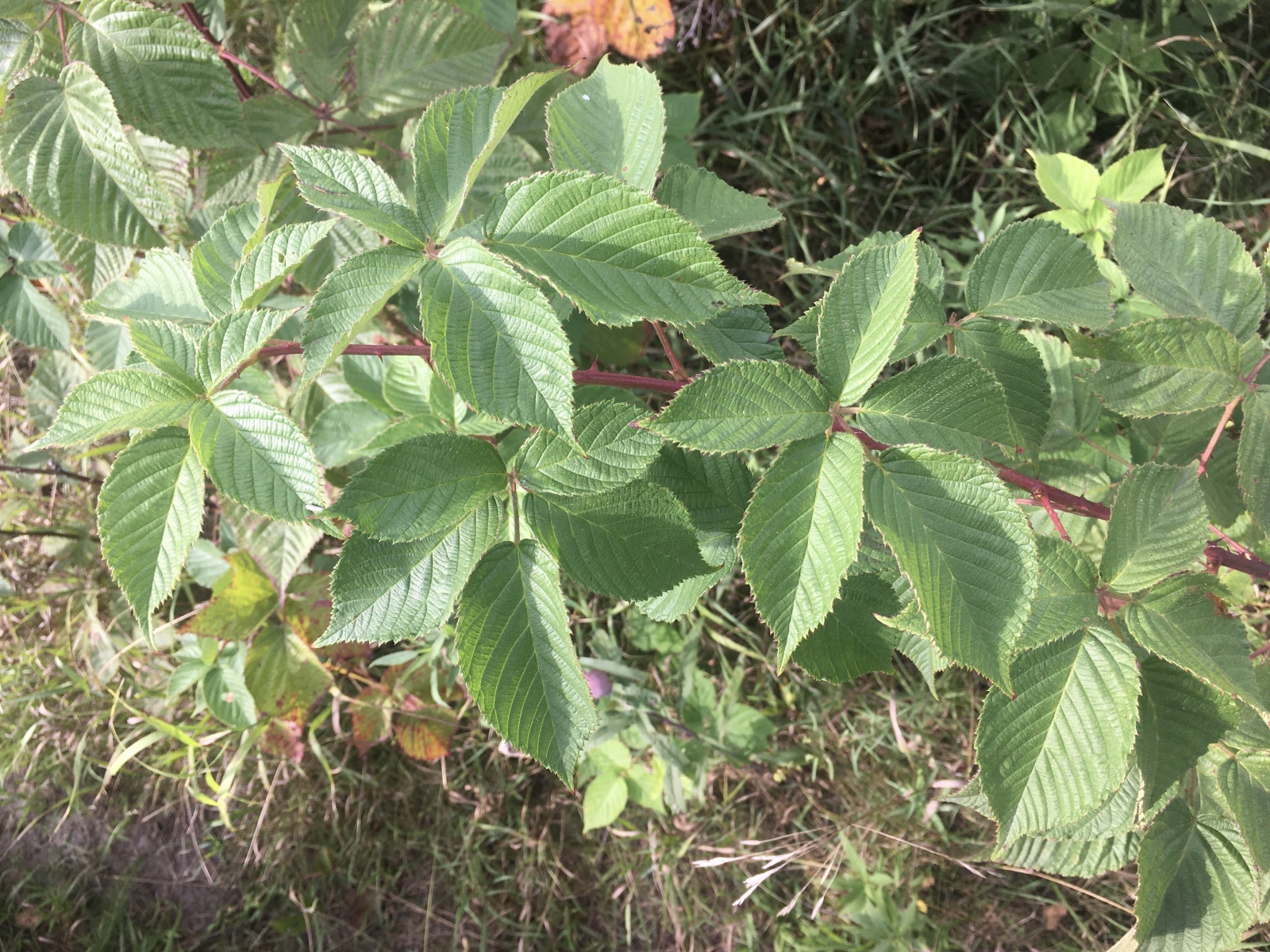 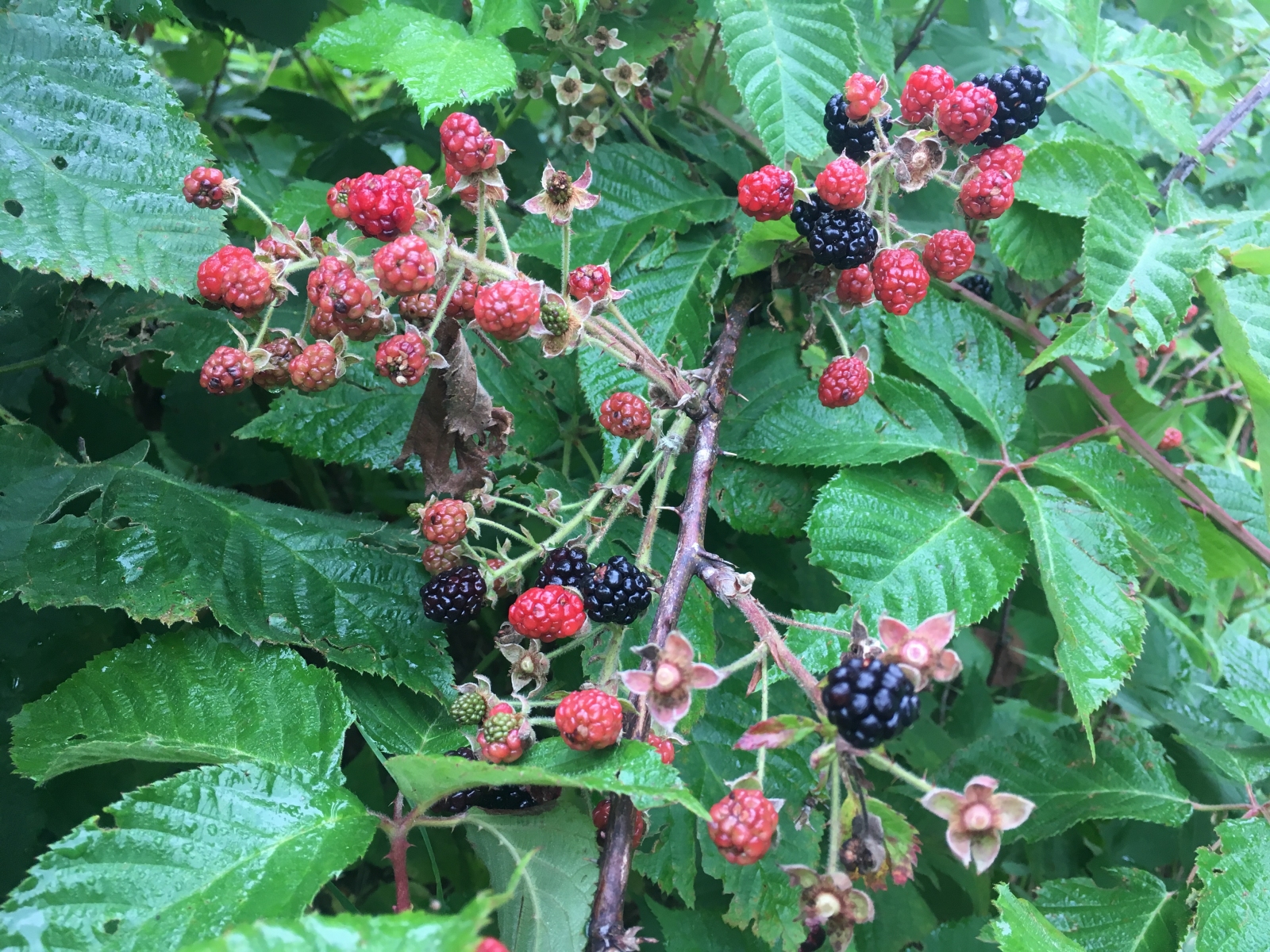 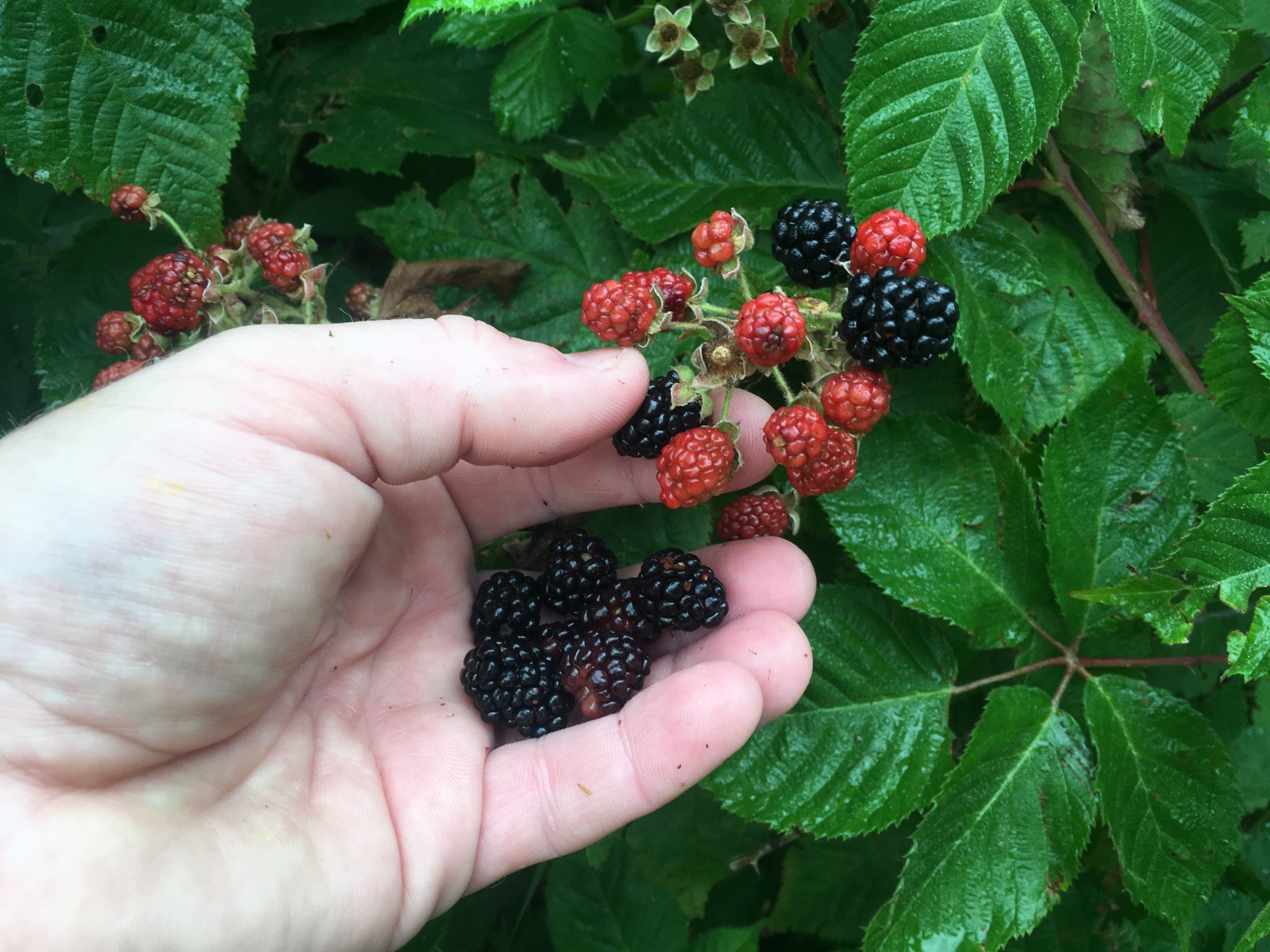 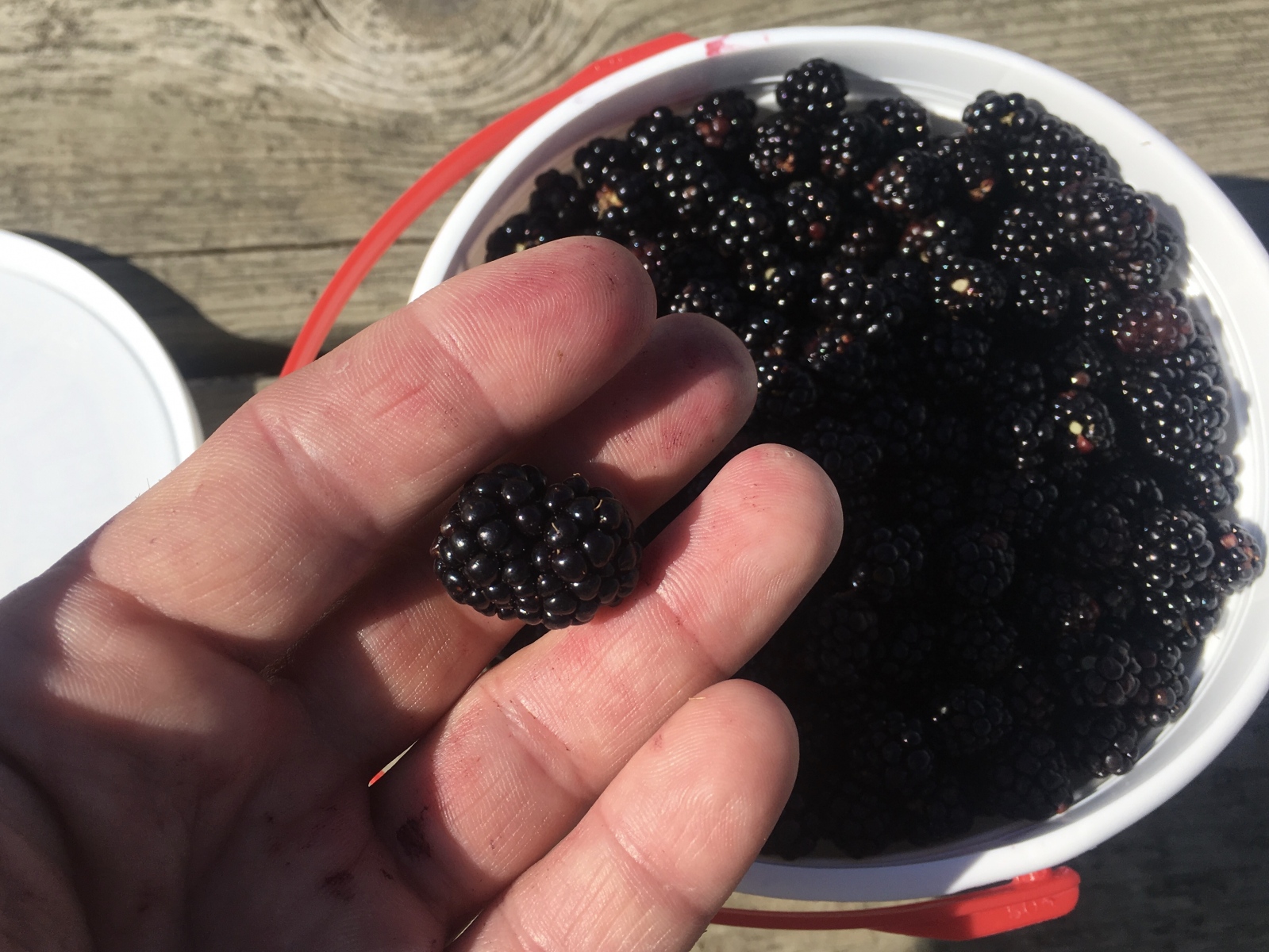 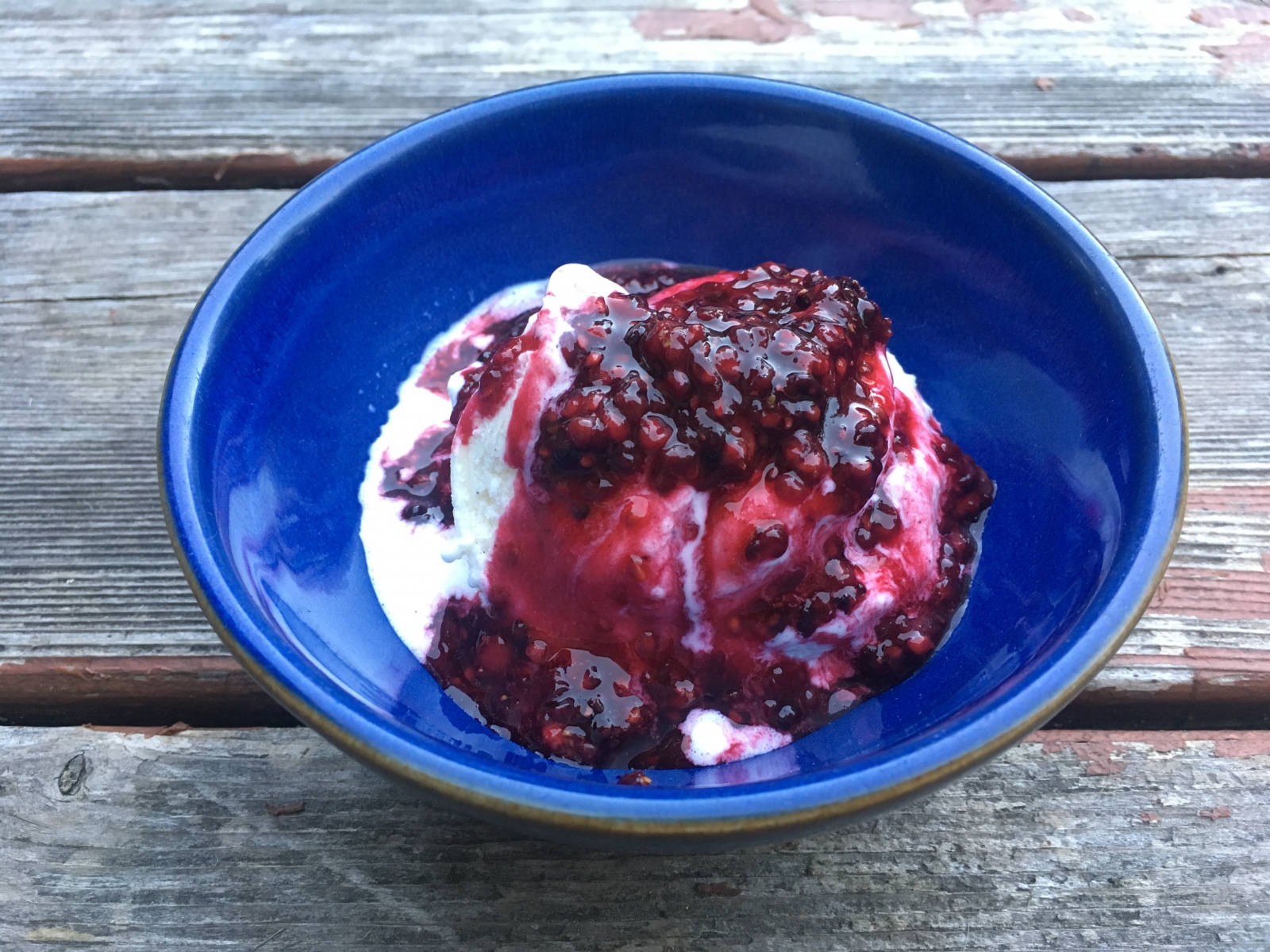