The year so far has thrown some curveballs, some of which I have actually been able to connect with. But for every victory- no matter how small- there have been many more disappointments. Perhaps your experience has been much the same. For me, a lot of simmering story ideas burned up in March, along with the carefree life we didn’t know we were taking for granted.

A Year for Foraging

Despite abrupt lifestyle changes this year, some things have remained constant. Here in Minnesota, Mother Nature made sure the foraging season went on as planned. And if foraging groups on Facebook are any indication, it was a good year for recruitment. Never A Goose Chase saw a record number of foraging topics covered, including ramps, ostrich ferns, strawberries, dwarf raspberries, mushrooms, and more. If you missed any of those, you can find them on the What To Forage (WTF) page. 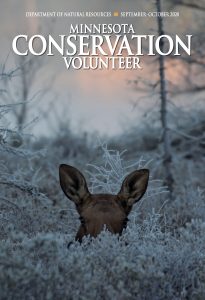 A short article I wrote on wild hazelnuts was published in Sept/Oct issue of Minnesota Conservation Volunteer, a Minnesota DNR publication. It was mainly a species profile for their “Minnesota Profile” feature, but the magazine showed interest in a foraging angle, and I stuck my foot in the door. The article may be viewed by following this link to the magazine.

Not surprisingly, the Association of Great Lakes Outdoor Writers cancelled its annual conference, despite holding out hope until late August. On the upside, AGLOW elected to go through with its Award-In-Craft contest, announcing the winners on September 16th, when we all should have been gathered in Gaylord, Michigan.

The judges showed me great favor for my writing and for this very website. The awards were as follows: 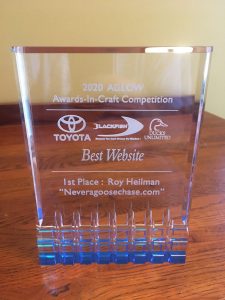 Never A Goose Chase was awarded first place in the Best of Website division. This was the first year that awards were given for member websites.

“When Everything Goes Wrong, Something Can Still Go Right,” the story of my deer hunt last fall, received second place in the Magazine division, hunting category. That story was published in Whitetails Unlimited in the Summer 2020 issue.

BWCA Entry Point 52: Saved By Gillis Lake, blog post from June, received third place in the Blog division, Open category. It was the story of my trip this year in May to Gillis Lake in the BWCA. Ironically, that solo expedition was a much needed escape from the isolation of Covid-19.

The full results of the competition can be viewed on the AGLOW website. The full ceremony may be viewed on AGLOW’s Facebook page.

Many thanks go out to the competition sponsors, Blackfish, Ducks Unlimited, and Toyota. The countdown to the 2021 conference has begun, and I for one cannot wait to make the trip to Gaylord!