Skip to content
Best of Minnesota - Get Outside - Trip Report

After my incredible deer hunt in the Mississippi bottomlands of southeast Minnesota last season, I’ve been hot to find similar territory for future excursions. And since the Upper Mississippi River National Wildlife Refuge contains almost limitless opportunities for somebody with more ambition than sense, it was an obvious place to start.

So, a few weeks ago I loaded up my kayak and made haste for Houston County. My plan was to paddle through the maze of channels and islands, survey the woods on foot for deer habitat, camp overnight, and hopefully find a place or two to throw out some duck decoys. That was the plan, anyway.

At the public access there was a guy about my age prepping his duck boat for an afternoon in the backwaters. He was not optimistic about his chances, but was looking forward to spending the rest of the day “in his happy place.” Ducks had been somewhat plentiful, he told me, but had moved on with the last storm. That was discouraging, since I’d thought the last couple of snowstorms north of there would have brought the ducks down. I adjusted my expectations accordingly.

The air was crisp and the sun was high when I shoved off from the public access. The northwest wind— same direction as the current there— carried me swiftly southward for almost the first mile. From there, it was a matter of snaking up a lesser channel toward the main river. The volume of water and speed of current seemed fairly average. Though I was to paddle against the flow for about the next two miles, progress was steady and not strenuous. 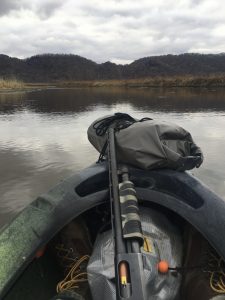 Between my car and the main channel, I saw only three ducks. At that point, I’d all but given up on having a Mississippi bottomland duck hunt. My focus shifted heavily to the scouting mission.

The first place I’d identified as a possible deer hotspot left a bit to be desired. The trees were large and well spaced, and reed canary grass covered the ground. Underbrush was nearly nonexistent and there were no obvious trails, rubs, scrapes, or beds. I headed upriver toward my next destination.

Pushing up the main channel was a bit more difficult than any of the backwater alleys. Numerous mats of vegetation floated downstream on a current that seemed about 50 percent faster than in the lesser channel. I had debated at home about bringing a little fishing gear “in case the duck hunting isn’t so good.” It was a good thing I didn’t, because fishing would have been an even bigger disaster than the hunting.

The next place I disembarked was on a sandy slope that led to one of many primitive campsites scattered along the main channel of the Mississippi. That particular island was higher in elevation and had a much better mix of trees and other vegetation. I grabbed my GPS and set out for a longer hike. Though I did not find the kinds of trails and other deer sign I expected at bottlenecks and crossing points, there did seem to be a lot of tracks in general— just not in predictable places. I wasn’t sure how to interpret that, but took some waypoints because I thought it was worth coming back to. When I’d circled back to my kayak, the afternoon was getting long in the tooth and I needed to decide where I’d be camping.

Now, in planning the trip, I’d opted to bring my camping hammock instead of a tent. I thought it would offer more flexibility in terms of locations. Ironically, it had the opposite effect. I could have pitched a tent at one of several camping areas along the main channel, but could not find two trees close enough together, with small enough trunks to accommodate my hammock’s straps. Between an accomplished deer scouting mission and a dearth of ducks, it didn’t seem worth pursuing anyway. I made a dash for the boat landing.

Within the maze of islands, I scoped out a spot to toss my decoys and watch the life drain from the day. It seemed no ducks were even in the same area code as me, save for three wood ducks that swung in close for a look. At least I got one shot off.

After a short, toe-chilling night in a nearby state forest, I wetted my paddle in a section of backwater I’d driven past many times before. It seemed as good a time as any to see how far into the woods it reached and whether or not it was a preferred waterfowl rest stop.

Well, I might never know, because once again I was witness to a staggering absence of ducks. I mean, a person would never guess that such a large proportion of North America’s duck population could all not be in such a place at any given time. It was truly awe-inspiring. One good thing was that I discovered an enticing alternate route to more islands and the main channel, which could be valuable for future expeditions.

After stuffing my face with chicken sandwiches at the nearest Kwik Trip, I set my sights on the destination that anchored the whole trip: Sanborn Canoe. 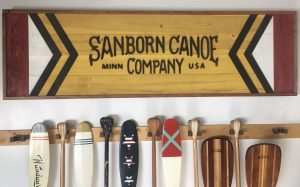 Since my May trip to the BWCA, I wanted badly to find a lightweight canoe paddle. With some internet snooping, I found that a Minnesota company has been quietly making beautiful, quality, lightweight paddles for some time. So, after weighing my options, I placed my order in August for a “Gillis” wilderness paddle from Sanborn Canoe Company in Winona, knowing it would take about 11 weeks to fulfill.

Sanborn is what I would consider a hidden Minnesota treasure. They’ve been growing the business steadily over the years, and not so long ago they bought the Merrimack Canoe Company. That tradition of canoe building was a natural fit with their from-scratch, artisan-grade paddle business. They now push about 1 canoe per week out the door, along with about 2,000 paddles every year. 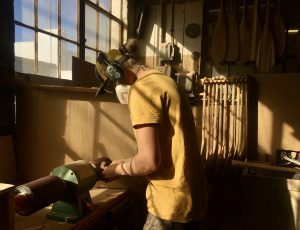 When I arrived at their shop down by the tracks, I was greeted by Peter, who gave me a little tour of the facility. Room by room the various stages of paddle and canoe craft were revealed, from stacks of wood blocks, to racks of glued and clamped blanks, to cedar strips being laid into the belly of a canoe, to paint and Kevlar being carefully applied to wonderfully formed paddles. Craftsmen were at work everywhere: painting, gluing, sanding, and applying finishes. It was like shop class for adults on a grand scale. Though basically inept in such an environment, I was inspired to grab something made of wood and start creating. I’m sure Peter was glad I didn’t. 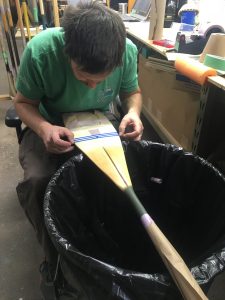 As we talked, Peter informed me that they currently employ around seven full-time employees, plus some part-timers. I couldn’t help but think that Sanborn is just the kind of small business that is most hurt by our current economic downturn. The upside, however, is that business for them has actually been pretty good, just as it has for most of the outdoor industry this year. I hope that on the other side, the scale will have tipped in their favor and they can continue seamlessly with the momentum they’ve been building.

At the end of my tour, Peter presented me with my new paddle. It was every bit as light and pleasing to the eye as I’d hoped it would be. Since it was too late in the year to take it out for a proper trial, it’s hanging on the wall of our family room, waiting for the first opportunity for a paddle next spring. 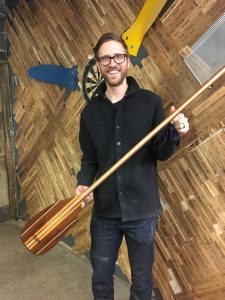 The last thing I did there was to “sign” their guestbook of sorts: throw three darts, then write your name and score on a strip of wood that is applied to the wall. If you want to know my score— and beat it— stop into Sanborn the next time you’re near Winona.

Paddling Into the Future

So, aside from picking up my paddle and touring Sanborn Canoe, my trip was a fairly lukewarm experience. Those particular days landed decidedly between flights of ducks. The backwater islands weren’t as rich with deer habitat as I’d hoped. And after miles of paddling with gear and gun, I realized that a deer hunt by kayak was much less feasible than I’d imagined, and if I was going to go that far into the bottomlands, it would have to be in a canoe with a hunting partner.

As I explained to my wife, some trips are home runs, and others are not. This one really wasn’t. But that’s how it goes; they can’t all be. If anything, it was a rich fact-finding mission that will help lay the groundwork for future trips. And that’s not all bad.