It all started about two years ago. My deer season had almost passed without a single deer sighting. I’d spent two rainy days in a deer stand on private property, then one especially frigid day hoofing it on state forest land. If it weren’t for the good fortune of my brother and dad, we’d have been short on meat for the year.

From the warmth of home I started looking for new places to hunt deer, in order to increase my chances for filling the freezer in following years. I paid attention to the “Special Hunt” section of the regulations for the first time, and the state park hunts intrigued me. The Minnesota DNR website revealed a treasure trove of information that helped set things in motion.

I settled on one park with a high hunter success rate and a large offering of tallgrass prairie. Although that one is always an antlerless-only hunt, I never turn my nose up at the chance for meat. Plus, it seemed like the perfect place to attempt a Minnesota rarity: a spot and stalk hunt.

The next ten months passed slowly while I waited for my opportunity to toss my name in the hat. As it turns out, I had to wait two years before being drawn for a permit. When I received that coveted post card, however, I did not wait at all to begin planning.

Once again from the comfort of home, my plans took shape. Satellite photos helped me identify likely hiding places for deer on the prairie. Topo maps added to my understanding of the terrain and suggested travel routes for both hunter and quarry. A phone call to the park ranger who was the hunt coordinator confirmed something I’d already suspected: most hunters crowd into the woods in one relatively small part of the park. This was great news to me, along with arranging with him so that I could camp within the park (normally closed to camping by deer season). With about a week to go, everything looked perfect.

Once within a couple days of the hunt, however, everything was not perfect. Snow was on the way. Sustained high winds were expected and temperatures were on a downward trend. Despite sitting in 60- and 70-degree comfort during the opening weekend, I faced temperatures a few days later that would come uncomfortably close to single digits. Reluctantly, I reserved a hotel room and considered the fact that I might not be able to hunt out in the open as I’d planned.

I arrived at the park the afternoon before the hunt to do some scouting. There were about 4 inches of snow, the most recent installment having arrived the previous night. Despite making walking more difficult, this turned out to be an unexpected blessing: it became incredibly clear where all the deer had been (and hadn’t been) in the previous 24 hours.

After I’d trudged over a mile and reached some oak trees, I found the spot to be. It was in a little valley of sorts, where mature oaks formed a convenient travel corridor. I didn’t linger long, but did encounter one doe. With a sitting spot identified, I planned to return first thing the next morning.

A Day to Remember

There was a light breeze in my face as I marched about a mile and a quarter in the dark. Two deer sprang from a thicket just before I reached my destination. I took it as a good sign and settled in next to a twin-trunked oak.

The action began with movement uphill to my left, just where I expected deer to emerge from their beds. Two does crossed cautiously through an opening in the trees. I didn’t take my shot because I believed they would come down the trail to present me with a closer, better one. Instead, they opted to cross the trail and go out across the prairie. I didn’t despair because I believed that spot was good, and that it wouldn’t be long before I saw more deer.

Well, I was wrong. The wind increased steadily and began swirling around me. I applied every layer I had. When light shivers had almost become uncontrollable shakes, I poured a mug of coffee. I sent text messages to family members and did my best not to look at the time. By and by, the coffee ran out. I scanned the woods, listening and obsessively checking all the places most likely for deer to appear. I turned my head farthest left to discover the rear half of a deer, only about 15 yards downhill.

Three things struck me all at once. First, its fur was rich brown and shaggy, like the winter coat on a horse. Second, it seemed too large and muscular to be a doe. Third, I was astonished at how it had snuck in so close to me. I needed to get a look at its head, but there were many trunks between us.

It meandered around down there, munching and semi-alert. I finally spied a glimpse of antler and relaxed mightily (it occurred to me later how completely opposite that reaction is from most other deer hunts). Turns out he had a spindly 8-point rack. When he intersected my swirling scent, his head shot up and he actually bolted back toward me. At ten yards, we stood with nothing between us in a tense staredown. He finally flicked his tail and meandered through the woods and out of sight. I wasn’t shivering anymore. 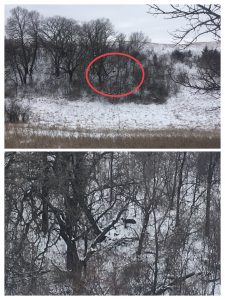 About 11:00, I was cold once again and had no choice but to leave. I needed to sign in at the ranger station at some point that day, so it seemed a logical next step. Ryan was friendly and informative, as he’d been on the phone. The harvest was minimal at that point, and some hunters had already left for the day. I had the chance to talk with some of those other hunters, and one hinted at something I expected state park deer to do: stay bedded and watch you walk by. Since it would be a long time before I could sit still again without getting chilled, I decided to try a little spotting and stalking there in the woods.

My strategy was to act predictably by walking the trails, looking for deer I could circle around and try to stalk. The first one I spotted was bedded in the trees on a hillside across from the ridge I was on. It was a small buck which appeared to be missing a right antler. The next was a doe in some thick willows on the edge of a swamp. I thought she looked small and didn’t consider shooting. She was going to let me walk past, but when I turned and took a couple steps in her direction, she was quick to get out of there. The last was another small doe, bedded down the hill from the campground— a stone’s throw from where our family camped several years ago. I was glad she was on the small side, because shooting a deer just yards from where we once pitched a tent didn’t appeal to me. 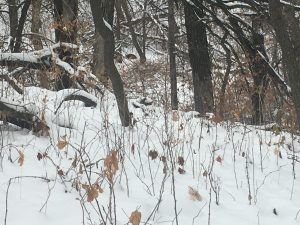 The remainder of the day was to be spent in my first spot. While on the way there, I saw two does hustling through some trees toward the prairie in front of me. They disappeared behind a rise, so I stood and waited to see where they would appear. In a minute, another pair did the same. I looked left and saw yet another doe running from left to right across the grass with a big buck in pursuit. They, too, vanished behind the hill. I didn’t see any of them when I moved on a few minutes later.

About a hundred yards short of my goal, it smelled like somebody spilled a 55 gallon drum of doe-in-estrus scent. I stopped in my tracks, supposing that buck and doe were near. After about 10 minutes spent in observation and indecision, I continued cautiously. That pungent scent seemed to be blowing down off the prairie, so I kept a hairy eyeball on the hillside to my right. The air freshened up by the time I reached my tree.

Before I cooled off enough to put any heavy layers back on, a doe descended into the woods. That pungent scent filled the air in my little valley once again. She picked along steadily and denied me any shots before disappearing over my right shoulder.

Since she was meandering, she could easily have ended up in my lap without notice. I stood up, hoping to see her before she saw me. Two more deer filtered through the brush on my left a minute later. I was positively surrounded.

I did my best to watch both directions, but soon I could hardly move without being seen by the duo on my left. Still standing, I raised my gun at the first opportunity. Only one seemed to move at any time while the other kept watch. I was hard pressed to either lower my gun or keep it trained on them. Pretty soon I was wavering; whether it was from exhaustion or the cold, I didn’t know. One stared hard at me and even stamped her foot. I thought it was over.

Fully on alert, they finally reached the trail and began to follow it. Mercifully, one stopped in an opening about 50 yards away. They both dashed up and over the hill at the shot.

I found her in the bluestem when the West was bleeding shades of purple and orange through the clouds. Coyotes howled off to the south. In minutes, the clouds peeled back to reveal planets and stars on an increasingly inky sky. It was a dynamic ending to a memorable day.

I notched the tag and got to work before my fingers could turn numb. That relentless, stinging wind bit at my face, but could not wipe the smile from it.