You don’t need to be told how horrendous 2020 was. We all lived through civil unrest, a hundred-year pandemic, a spiraling economy— all in an election year, no less. We complained, we laughed, we shared memes. We clung to anything to get us through, including a shared belief that 2021 could only be better.

Here we are, and I don’t feel any different.

That should be no surprise. The wide spreading effects of this public health crisis have literally seized my body with stress and tension on more days than not. I’ve never known so many aches and pains. And that has nothing to do with almost a total loss of work and income, isolation, or worry about friends and relatives. It has everything to do with my fear that people I know— and my relationships with them— will never be the same once this is all over.

To this day, I hear people say things about Covid-19 that indicate they still don’t understand what’s been happening or what’s at stake. The only other explanation is that they just don’t care. Either way, it has been supremely distressing to me. And that’s not to mention that I see fellow Christians excusing themselves from the most important opportunity in their lifetimes to show concern and care for their neighbors. I mean, if we can’t put our own convenience and sense of normalcy behind the welfare of others in this moment, when would we ever?

It’s enough to make me want to quit people altogether.

Fortunately, that’s exactly what we were able to do up North for the New Year holiday. Time at the cabin has been our automatic escape from the monotony of home life since March. So we made the most of it there with snowshoeing, long walks in the woods, and time relaxing by the fire. I myself took the opportunity to go spearfishing for the first time.

I’ve been meaning to try that for a few years now. It was a pastime for Grandpa and my dad, and has always beckoned to me as a means to connect with the “ancient ways.” I’ve mostly lacked the time and equipment to throw myself in. But the sunny afternoon of January 2nd was irresistible, and I knew just where to cut a rectangular hole on our lake. 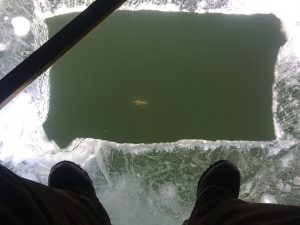 A couple little northerns darted in to attack my decoy when I jerked on the line. I nearly skewered the second one, but passed. When a much larger one came in steadily like a bumbling blimp, I dropped the spear. A miss, but I didn’t mind; that’s to be expected. It was fulfilling just to have tried.

For a little less than two hours I was alone in the quiet, feet perched at my window through the ice, crows passing overhead. It was bliss, even if only for a moment.

As the sun filtered through the treetops and lost its power to heat my tent, a chill crept in to signal my impending exit. I could feel the outside world once again boring into me, just as the tines of the spear had been slowly but surely sinking into the ice. Though I was only bound to trudge 300 yards or so, it seemed an unbearable leap back toward an uncivilized civilization. It’s an understatement to say I didn’t want to go back.

We enjoyed 20 more precious hours of feeding the fire, radio shows, game playing, and good food. Having ushered in a new year, we departed for home in hope that 2021 would return us to normal.

Only a few days later, however, a riotous mob invaded and defiled the heart of our democracy, revealing how foolish we were to believe the turning of the calendar would cause the scales to fall from our eyes.

It’s enough to make a guy disappear into the wilderness for a while.

I honestly can’t see the way forward, though we literally have no choice. If the ugliness that spewed over on Wednesday doesn’t prove to be the shot in the arm we desperately need, it will only have been a symptom of the ailment overtaking our country— which I fear will prove fatal. 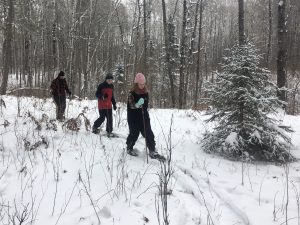 One thing is for certain: 2021 will see me drilling holes in the ice, paddling and pedaling, traversing field and forest, and harvesting wild food with my family. No matter what happens in the world, I know where to find peace and tranquility. I can’t keep people alive or return them to reason, but maybe I can wait them out.