Last week at this time I was miles from shore on the west side of Mille Lacs, soaking up the sun and having a fine day. You may already know I love ice fishing, and that I also like to get to the “big lake” at least once every season. But this time was different: I was lured there by a cause.

The Fishing For Ducks ice fishing contest has become one of the region’s most well-known ice fishing blowout events, with thousands attending annually. It serves as a fundraiser for Ducks Unlimited, and is put on by the DU chapter right there in Garrison. In the recent past it has occurred on Presidents Day weekend, when my household will usually head (farther) north for the long weekend. This year’s contest— the 17th installment—saw a new format due to Covid-19. Not only did it not occur on the holiday weekend, but mini contests were spread out over three days. 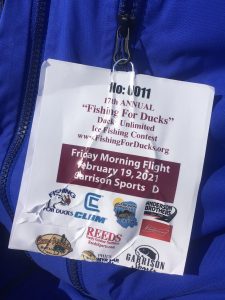 I went to the website and snagged a ticket for Friday morning. It seemed reasonable to assume there could be fewer people in attendance than Saturday or Sunday, which would boost my odds of winning something. Well, I was right on the first count.

It was a tense two hours at my chosen spot. I personally did not witness anyone around me catch a single thing. It was a relief when a grown man in a duck suit strolled through the crowd, shooting t-shirts from a cannon— I needed a break from the tedium. With about ten minutes to go, a voice came over the loudspeaker, announcing that there were several fish on the leader board and that time was almost up.

Suddenly there was a terrible lump in my throat. I should have guessed something was wrong when everybody glared at me each time I blew on my duck call. I sheepishly gathered my decoys, reeled in, replaced corn kernels with waxworms, and cursed my literal, gullible self.

Okay, not really. But it does make a better story than what actually happened…which was nothing. There were little fish underneath me nearly the entire time, but try as I might I could not convince them to bite. The one that did seemed only to grab onto the back half of my waxworm, leaving me with an empty hook and frozen teardrops down the front of my coat.

I did not claim any prizes that morning, nor did I score in the raffle I entered. That’s consistent with my record at ice fishing contests, raffles, and pretty much everything lately. But I was glad to have tried, and of course my money went to Ducks Unlimited, a good cause.

With crushing defeat behind me and most of a beautiful Friday ahead of me, the obvious choice was to purge my frustration by fishing it out. I headed back to town for lunch and a pass to Garrison Sports’s road system.

There aren’t a ton of choices for lunch in Garrison that won’t eat up valuable fishing time, so McDonald’s was the best I could do. The good news is that the drive-thru experience was the fastest I’ve ever seen, hands down. The bad news is I learned that Spicy McNuggets are 3% chicken, 1% battered greasiness, and 96% hype. At least I had the wisdom to order fries.

I sucked down my medium Dr. Pepper on the long drive to the end of the road. It was somewhere I hadn’t yet been on Mille Lacs: a little hump apparently called “Shark’s Tooth.” There were precious few people that far out, which is always an automatic win in my book. My plan was to find an edge on that hump and set up on the bottom of the break.

I found what I was looking for at a depth of 34 feet. It turned out to be a sharp break, which is probably neither here nor there, but seemed to hold little fish—probably perch. In my limited experience, this is the type of place where I could encounter walleyes patrolling during the day, but also have feeding tullibees drop by. After a few encounters with large, schooled, suspended fish—presumably said tullibees—I was convinced that if they were biting anywhere, I’d have to move to find them.

Only about 100 yards away, the bottom was a bit softer. Perhaps, I thought, a softer bottom composition would offer a more plentiful buffet, and any tullibees would be more eager biters. It seems I was right.

Though they weren’t acting like rabid piranhas, I did finally get some nibbles. The first fish soon came unhooked, which prompted me to sharpen my little tungsten jig. The next fish might have made it to the top, save for a finicky reel and some egregious operator error. That one stung a little. 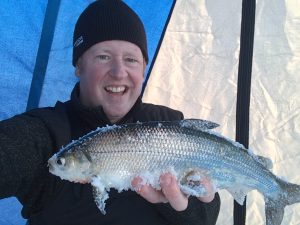 When a red band appeared about 16 feet down (over 35 feet of water), I reeled up ferociously. Tullibees so far from home are unfailingly aggressive in my experience. This one was no different. I was exceedingly pleased to help that 16.5-inch beauty onto the snow.

If only it had come my way 6 hours earlier.

The afternoon melted away pretty quickly after that. The other pods of tullibees that passed through seemed to have “turned off” for the day. Still, the one I managed to pull up felt like a triumph since overall fishing conditions seemed to be negative.

I stepped out of my little Clam hub shelter a few times to stretch my legs and watch hot air balloons over the lake. Two passed almost directly over me, their burners whooshing forcefully. I’d never encountered that before on Mille Lacs; it was fun to see and hear them. The memory of those balloons gliding off in sunset’s golden glow is something that will last far longer than any smoked tullibee.

Fishing For Ducks started in 2005 and has a reputation for raising major bucks for habitat. Just last year the event pulled in $200,000. The big-fish winner this year took home a check for a cool $20k; he took it with a 3.55-pound walleye. Many more contestants walked away with guns, Yeti coolers, gift cards, and other prizes worth more than $100,000. If you want to try your luck next year, keep your eye on the Fishing For Ducks website.

For over 80 years Ducks Unlimited has been conserving, restoring, and managing wetlands and associated habitats for North America’s waterfowl. Their efforts have conserved and/or influenced almost 200 million acres of habitat across North America, for the benefit of waterfowl and other wildlife. If you think DU has made waterfowl habitat and hunting better in your area, you’re almost certainly right. To join, find your chapter, or just make a donation to support their mission, visit ducks.org. 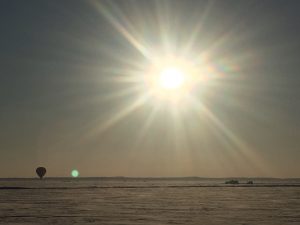